It’s the second sold-out night of Tom “Squarepusher” Jenkinson’s post-pandemic return to Tokyo, and the newly renamed Spotify O-East’s main hall in Shibuya’s Maruyamacho area is packed with as much people as excitement. The jazz-electro-breakbeat polymath is finally back in the Japanese capital. And it’s an excitement that isn’t exactly diminished by the exuberant Halloween festivities outside. Walking from Shibuya station via Dogenzaka up to the show, and listening to the 47-year-old Brit’s most recent album – 2020’s Be Up A Hello – while seeing intoxicated people in bizarre costumes against a neon skyscraper backdrop, provided a fitting appetizer for the mind-bending multimedia show that was about to come.

Even more fitting is the choice of Squarepusher’s Warp label mate Hudson Mohawke as the opener, blasting out what—at least for the most part—is a more intensified megamix of his most recent album; this year’s Cry Sugar. It’s the Scottish producer’s first solo album in seven years, and it’s strongly influenced by his move to Los Angeles, and the city’s overt decadence wrapped in overly bright colors. The album shows Mohawke taking his signature pitch-shifting, pastel-laden subversion of IDM even further into the neon abyss. This mood  also very much goes for the animated videos that have been released to accompany the album, created by digital art innovators like Connor/Kingcon211k, Deadhanded, Lucamaden and Roope RAlnisto. These Adult Swim-inspired AI-fueled sunshine nightmare animations—filtered through laser beams—are screened above Mohawke at his front stage DJ/desk position. And it works strikingly well with the O-East crowd. In particular the more soulful—albeit still gleefully twisted—tracks from Cry Sugar, such as singles “Behold” and “Intentions.” 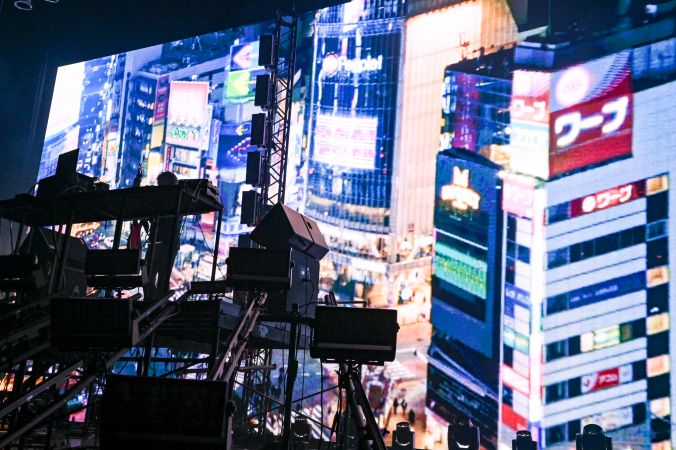 Squarepusher’s set brings the visual element on even stronger, with an incredible visual score by his long-time collaborator Daito Manabe and Manabe’s world-renowned digital art collective Rhizomatiks. Before Squarepusher walks on stage with his six string electric bass in hand, the music video for the almost five-minute-long single “Terminal Slam” from Be Up A Hello, is screened for the audience – behind Squarepusher’s semicircular throne of speakers, lights, and his rack with numerous gadgets – from synths to beatpads to pedals. The video is a gorgeously doctored collage from both familiar and less familiar parts of Tokyo, fittingly starting by Shibuya Crossing. It functions as a salute to Squarepusher’s presence in Japan, and underlines exactly what I felt while walking up Dogenzaka towards the show; how exceedingly well Squarepusher’s enigmatic sound works in this environment.

Even though this is Squarepusher’s second night of two at O-East, it’s clear that he is still giddy with exhilaration himself – over being back in Japan. Maybe this state of mind is partially the cause of what first seems like a particularly Autechre-esque Squarepusher track, which then actually turns out to be something that has malfunctioned – creating a somewhat aggressive techno loop synced with the semicircle of red blinking lights. Tom Jenkinson shouts “gomen” to the audience (a casual way of saying sorry in Japanese), before running off stage and mending the issue – while fans shout words of encouragement like “gambare”. 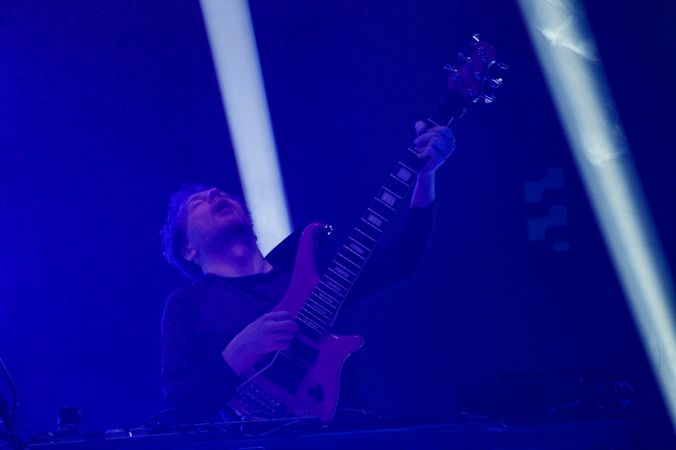 When he comes back on stage and asks us all to count down to ten with him (“Me in English and you in Japanese!”), the atmosphere feels more intimate and personal than what it would have without this minor malfunction initiating the show. And personal is what the structure of the concert turns out to be; we’re taken on a career-spanning journey through the corners of the Squarepusherverse; from the avantgarde glitch, to the jazz fusion breakbeats, to the more meditative electronica tracks. And the intensity remains intact throughout all of this.

It’s also very much a live concert, and not just Squarepusher DJ’ing like the last time he played at O-East, in 2019. Tom Jenkinsons’s brilliant improvisational abilities as a musician is most apparent in the beginning of the show – and at the end. This means, for example, Squarepusher at times playing around with his keyboard as if he was at the esteemed jazz club Bluenote Tokyo instead of O-East – and putting his bass experimentation through the impressive rack of various foot pedals he has set up on stage. For someone like this writer, that has been a fan of Squarepusher for over two decades, it’s truly spellbinding to get to experience this jazz-and-tech-music virtuoso’s self-curated audiovisual live exhibit of his own journeys through music. And when he brings it all home with the graceful, throwback-sounding track “Oberlove” from Be Up A Hello—before a wonderfully unhinged encore where Jenkinson almost applies a heavy metal intensity to his bass playing—he has really gone full circle. Sated with the myriad jazz-electro-breakbeat nuances that only Squarepusher can provide, we walk out in the costume-laden Shibuya night, as if still in a Daito Manabe-video.

This is a review of Squarepusher’s concert at Spotify O-East on October 28th, 2022.
Feature Image Credit: TEPPEI

Erik Augustin Palm is a Swedish culture journalist and TV-producer based in Tokyo. In his spare time, he strums his acoustic guitar at some small live house.