Running the road to recovery

The ‘Run for Tomorrow, Run for Today’ relay race to benefit Tohoku

The 1250km, 15-day path of the of the relay winds down from Aomori in northern Honshu, through some 73 local municipalities to end in Tokyo’s Ueno park. The route takes a brave group of volunteers, this year consisting of 1,300 runners and 100 cyclists, on a relay race through some of Japan’s most beautiful but isolated areas.

This is the land of the March 2011 Tohoku earthquake and it still bears many scars from the past. Every now and then the relay participants find themselves amidst villages curiously sparse of buildings, or vast construction sites, roads crammed with construction vehicles. There are reminders scattered everywhere, some subtle, such as abandoned sea walls or overgrown foundations, some more soberingly obvious, such as the empty shell of the Bosai centre, the former building of the Crisis Management Department which sits near the centre of Minami-san-riku, and will remain as a reminder of the spontaneous destruction nature can bring. 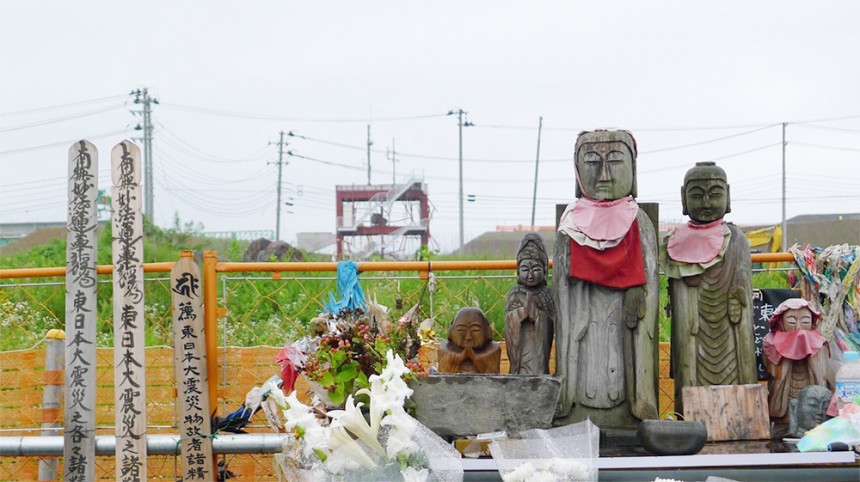 The ‘Run for Tomorrow’ relay was started in 2013 by the Tokyo Metropolitan Government in an attempt to preserve the memory of the disaster and maintain awareness of ongoing reconstruction work. The full slogan, ‘Run for Tomorrow, Run for Tohoku’ inspires hope of brighter prospects for the region, and in anticipation of the 2020 Tokyo Olympics, the Tokyo government hopes to share some of the world’s attention with its neighbour.

I found myself attached to a press tour invited to cover the relay and view first hand the painstaking process of reconstructing pacific Tohoku. We arrived in the afternoon amongst budding festivities at the newly built Minami-san-riku shopping plaza.

The brand new shopping plaza was opened by local Mayor Sato with the intention of welcoming around 800,000 visitors to the town each year. Things are looking good says the Mayor (a survivor of the tsunami with a harrowing tale of his own), and the plaza is expected to exceed its target easily this year. Expectations grow as the Olympics are expected to bring further visitors to the area. 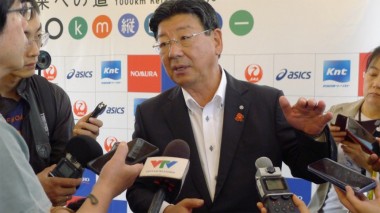 Mayor Sato addresses the press after the run. The Mayor is one of only three survivors from the Bosai center, he and two others clung onto a steel beam of the centre while the wave washed over the three story building.

The plaza’s small collection of shops, the only real buildings for hundreds of meters, sit on raised ground on the site of the yet-to-be town centre. Once a quaint seaside town, home to busy fisheries and a bustling tourism industry, Minami-san-riku now resembles a construction site. The earthquake and tsunami destroyed 95% of the town center, leaving nothing but a few sodden, irrecoverable ruins. Now the area is inundated with trucks bringing in rubble and materials used to raise the entire town centre 10m above sea level.

A pyramid stands in the centre of the town rising a further 6m into the sky and glowering down on the Minami-san-riku shopping plaza. The pyramid marks the 16m height of the first March 11th wave that devastated the town and is a chilling reminder of past events. 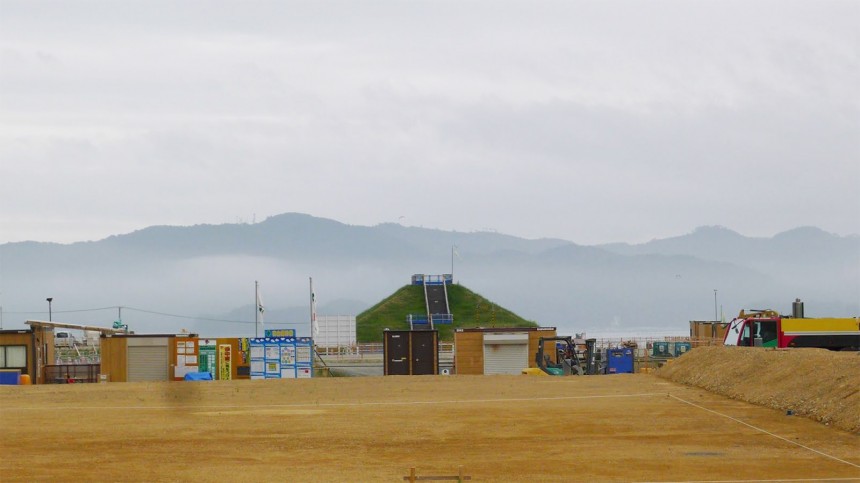 The 16m Pyramid, marking the height of the March 11th wave, as seen from the Minami-san-riku Shopping center.

But this does not worry the citizens of the town who have remained in Minami-san-riku, despite the hardships following the disaster. They consist of no more than a third of the original population, those not inclined to leave a place that has been home to them and their families for generations. The town has survived several other destructive tsunami in the past, two in the lifetime of the town’s eldest generation, and though nothing has compared to the destructive power of the 2011 Tsunami, it is clear that Minami-san-riku will continue to be their home no matter what. 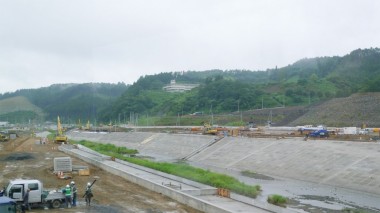 At around 3 pm that afternoon we welcomed back the last of the day’s runners. Food had been prepared by a group of local ladies, who continue in their endeavour to improve the health of the local area and teach their men how to cook. Their health-focused group, ‘Healthmate,’ was started before the tsunami and seems to be continuing strong now. 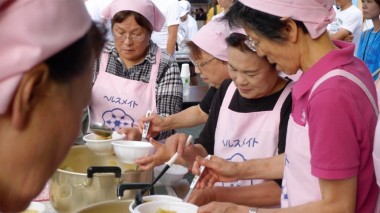 The women of Healthmate prepare a healthy meal for the runners. 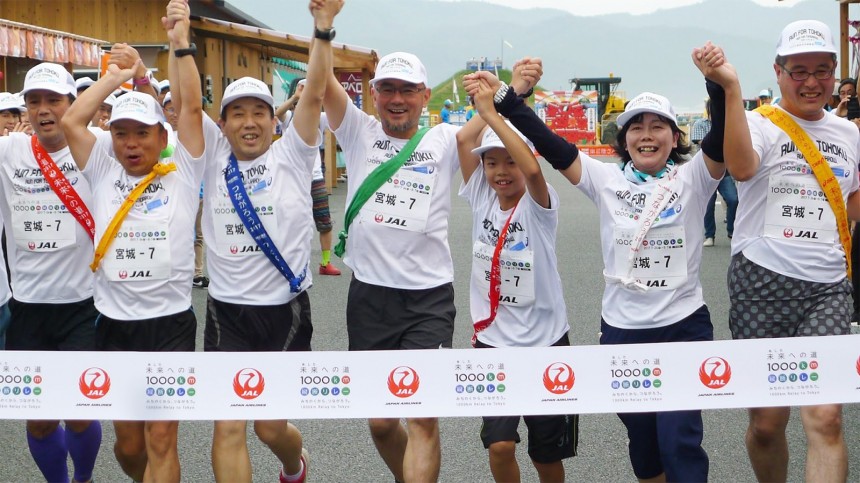 The last leg runners are welcomed into Minami-san-riku.

After a bite to eat, I spoke with Fujii Ichiro, a five-year veteran of the relay. Ichiro, from Tokyo, had spent 3 years as a volunteer immediately after the earthquake, coming up from the capital for months at a time to do what he could. Initially, work consisted of searching for bodies and removing debris, but as recovery continued, he found himself in increasingly pastoral positions, checking in on the survivors’ mental health and chatting with the area’s growing elderly population. “They are divided,” says Ichiro. “Recovery efforts must focus on individuals. There are many personal issues and traumas that people need help with.” Despite this, Ichiro firmly believes that recovery is possible, and he has been involved every year with the 1000km relay, watching the area slowly recover.

“I am happy to see the attention that the relay is bringing to the area. It feels like they are being watched over by people from all around the world.” He fears that without this kind of event that people would feel left behind or forgotten. 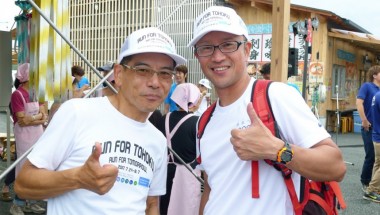 Fujii ichiro (right) has run in every relay since it started and helped out as a volunteer immediately after the disaster.

The next morning we returned to Minami-san-riku to see off the runners on the next leg of their journey. Before everything kicked off I caught up with some local residents to learn about how the run was affecting the local area.

Mr. Kumagai, who runs a local stationary store in the newly built shopping plaza, stands cheerfully behind his counter, pointing out a picture of his old shop that was washed away by the 16m wave. In true mercantile spirit, it was the shopkeepers of Minami-san-riku who showed the first initiative in the recovery and reconstruction process. Kumagai is proud of his new shop in the shopping plaza. Despite a slight lack of customers, he is confident for the future. The run brings a lot of attention to the town and he hopes that the Olympics will bring all sorts of new people into his shop. “We are very grateful for all the help that has come to us from all around the world,” he tells me, as well as how he hopes to meet many more people from around the world during the Olympics. 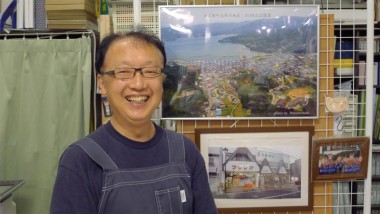 Mr. Kumagai, a local shop, keeping stands next to pictures of the town and his shop before the tsunami.

To kick off the next leg of the run, we are treated to a live performance by the local kindergarten marching band. After a new kindergarten had been built, the children of Minami-san-riku were gifted a set of musical instruments from an international donor.  The children were of course eager to show off their new musical instruments, and we began the ceremony with a bang.

I spoke to Mr. Masaru, a local business owner who had come along to watch his grand child perform in the marching band. He described his business situation as ‘so-so,’ but is happy to see the attention that the relay has brought Minami-san-riku over the years. The town’s youth population – decreasing long before the tsunami – has seen a massive crash, with younger families leaving the town. But there is hope that the revitalization efforts will bring back some of the town’s former character and perhaps some of its youth. This of course is some way off yet. 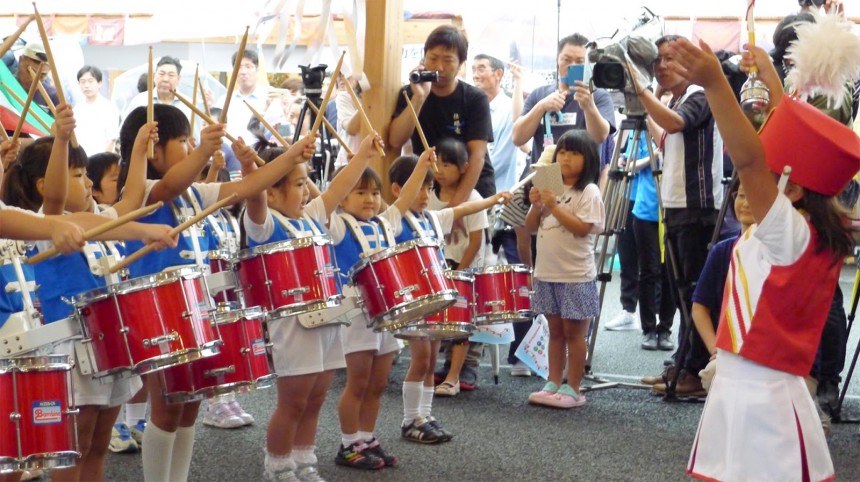 The children of Minami-San-Riku Kindergarten playing their new instruments, donated to them from abroad.

Joining the day’s runners were some students from Kyushu, individuals who had volunteered during the Kumamoto earthquake in 2016. Shimamura Tomonnari found himself at the center of the crisis and ended up starting a volunteer kitchen in a bicycle parking lot. He, along with 9 other students, had joined a tour of the relay to maintain awareness of both the Kumamoto and the Tohoku quakes. “The media soon got bored,” says Shimamura, “we must remind them that there are still people struggling, even if we don’t see it on TV.” 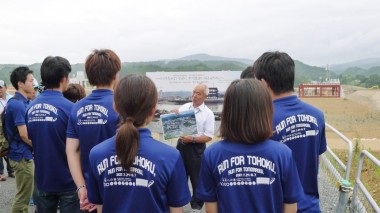 Reconstruction is a long and tiresome process and completion of the work is decades away at least. For those involved, it is evidently a frustrating and dejecting experience, and something that will shape their lives for years to come.

Like a 1000km run, it is an insurmountable task to undertake alone. Events like the ‘1000k’ are a great way to show the people of disaster areas that they are not struggling alone and that they have not been forgotten. The area has received help from all over the world, and with the Tokyo Olympics on the horizon and assistance from the Tokyo government, there is hope that some of the Olympic prestige will make its way up to Minami-san-riku and other affected areas. Progress is slow, but as the gaze of the world returns to Japan in 2020 it seems that people of Tohoku, in true Japanese spirit are slowly finding the energy to rise to their feet and start running again.