2022 will mark the 25th iteration of Japan’s biggest outdoor music event—Fuji Rock Festival. The event has accumulated a legion of fiercely loyal fans known as Fujirockers. Like migratory birds, they have come almost every year since their youth and now arrive with baby carriages and diapers in tow. Facing a domestic-only event in 2021 and an online format in 2020, the festival organizers are no strangers to overcoming challenges. Having repeatedly battled the elements, headliner cancellations, changing music tastes and an aging population, Fuji Rock has remained one of the most-loved festivals in the world. Despite the ups and downs, something special about Fuji Rock has kept fans and artists alike returning for generations. 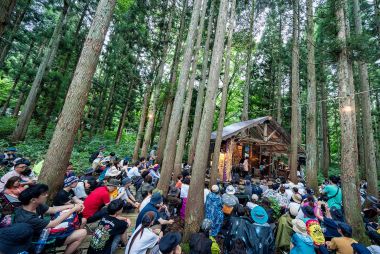 Inspired by rock festivals like Glastonbury, Fuji Rock’s inaugural event was held at Fuji Tenjinyama Ski Resort and headlined by Red Hot Chili Peppers, with Anthony Kiedis nursing a broken arm. Now known among fans as “Fuji Shock,” the festival was canceled on its first day due to a dangerous typhoon. Many of its inexperienced attendees — who were planning to party overnight — were stranded on the festival grounds and battled hypothermia. Despite its ‘rocky’ start, roughly 30,000 people, including The Clash’s Joe Strummer, witnessed the birth of a festival that would go on to achieve worldwide recognition and set a precedent for Japanese outdoor music festivals.

In an attempt to avoid a repeat of Fuji Shock (the logo of which was, ironically, a hurricane), organizers moved the 1998 event to Tokyo Bayside Square in Toyosu for another two-day festival headlined by Bjork and The Prodigy. The typhoon-free event survived the full two days. Still, the brutal summer Tokyo heat took its toll on the 70,000 attendees, leading organizers to continue their search for a new permanent location. 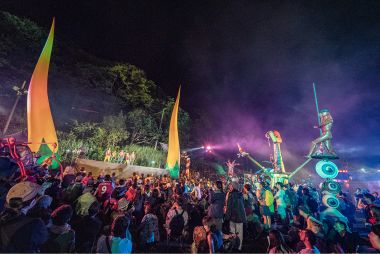 1999 saw Fuji Rock Festival expand into a three-day event on the grounds that Fujirockers now call home. The year also saw the birth of many of the festival’s mainstays such as the Green Stage, a 40,000-capacity natural amphitheater acting as the festival’s main hub, as well as the White Stage and The Field of Heaven. The Rookie A Go-Go stage also made its debut that year, a location that continues to offer young artists the opportunity to perform at the festival, and has launched the careers of now-established artists such as ASIAN KUNG-FU GENERATION, King Gnu and CHAI. When most people were nursing hangovers, a 300-strong group of volunteers banded together to tidy the festival grounds on the final day, which led to Fuji Rock being known internationally as “The Clean Festival,” a badge of honor that has stuck around ever since. 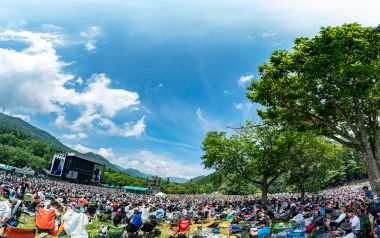 Not Queens of the Stone Age

After finding a stable home, the festival experienced a substantial period of growth, booking increasingly prominent artists and enjoying larger audiences each year. On top of this, the festival was welcomed by the local Naeba community, becoming an integral part of the region’s annual tourism and hospitality dollar. Despite the national devastation caused by the 2011 Tohoku Earthquake and Tsunami, 115,000 Fujirockers came to escape the year’s stresses. They witnessed the introduction of long-standing environmental and charitable initiatives such as the Fuji Rock Forest project, and Benefit for Nippon. The festival experienced some short-notice headliner cancellations like Queens of the Stone Age, but international artists such as Coldplay, The Chemical Brothers and Arctic Monkeys came to show their support for Japan and the festival itself, which had become a favorite among artists worldwide (though apparently not among Queens of the Stone Age).

2012 was a year of continued success, with the festival recording its highest attendance to date of 140,000. Still, celebrations were short-lived, with a cancellation from Kanye West and a 10-year-low turnout in 2014, just two years later. Organizers also experienced competition from Panorama Music Festival’s inaugural event on Fuji Rock’s 20th anniversary. The deep-pocketed New York festival bought up many of Fuji Rock’s staple acts, such as Kendrick Lamar, Arcade Fire and LCD Soundsystem. Despite this, a nostalgic lineup including of many of the inaugural festival’s artists, such as Red Hot Chili Peppers and Beck, helped the event return to form, with 125,000 Fujirockers coming together over the three days to celebrate 20 years of ups and downs.

2019, the last major iteration of the festival, enjoyed a sold-out Friday and Saturday, welcoming The Chemical Brothers back for a record sixth time on the first night. The following night, a capacity crowd of 40,000 braved record torrential rain for Sia’s headline set, with the downpour seemingly adding to the drama of the show.

Tame Impala and The Strokes were amongst the vast number of artists announced for the 2020 event, until organizers decided to postpone for the first time in history and switch to an online festival in response to the pandemic. Amid continued restrictions and border closures, organizers decided to go with a domestic-only event in 2021, offering a small amount of relief to Japanese music fans and struggling small business owners in the area. 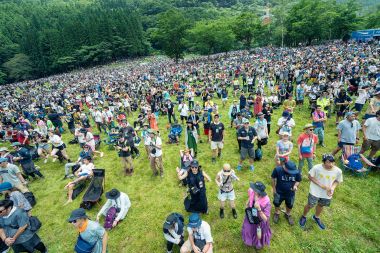 Heading into the 25th iteration of the festival, the first full-fledged, international version of the event since 2019, anticipation amongst Fujirockers is high. After a universally tough couple of years, an escape from the drudgery of everyday life and an opportunity to connect with others around the enjoyment of music and shared experiences is just what many people need right now. Fujirockers are anxious to return to what for many has become a spiritual home. This year, in what has become tradition, Fujirockers will come together at the Red Marquee tent on the eve of the festival to be greeted by organizers shouting “Okaeri!” from the stage, with the crowd enthusiastically responding “Tadaima!”

Metropolis: How many Fuji Rocks have you been to?

Nobumasa: The remote, mountainous atmosphere helps a lot. Its history also makes it special. Before FRF, we had local rock festivals in the city that didn’t last very long. Smash changed the Japanese music industry by bringing a Glastonbury-style music festival to Japan.

What’s your favorite set from Fuji Rock and why?

Satoshi: Probably Oasis on the Green Stage in 2010. It wasn’t a good set, and the Gallagher brothers didn’t talk to each other on stage. Still, I listened to their album What’s the Story Morning Glory more than 1,000 times throughout high school, so there was something about experiencing those songs live in the pouring rain that was very nostalgic and emotional.

Nobumasa: If you are an FRF virgin, I highly recommend joining official tours, which make your experience easier. Go to see bands you’ve never heard of before. You’re always sure to have a good chance to find new music.

Any Fuji Rock hidden secrets you’d like to let the readers in on?

Satoshi: It doesn’t feel like there is a barrier between artists and audiences at Fuji Rock. I’ve met a few artists at the Palace of Wonder, and I have a special memory of having a kampai with Tom from Chemical Brothers, who told me Fuji Rock is one of his favorite festivals in the world.

Nobumasa: I highly recommend going to the Palace of Wonder. Sunday night/Monday morning around 5am, where you can get a bit of a bonus if you are lucky.

Who should people see at Fuji Rock 2022? 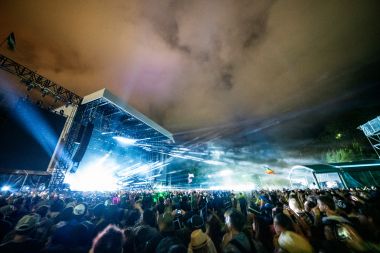 Metropolis: Firstly, for our readers, please tell us a little bit about yourself and your involvement with Fuji Rock.

Jason Mayall: I run the London office of Smash and have been involved with Fuji Rock since it began in 1997. I book international artists and organize the festival decorations, circus and Palace of Wonder.

Fuji Rock is the longest continually-running rock festival in Japan. What do you think it is about Fuji Rock that has led to its continued success?

Location, location, location. Naeba is the most perfect place for an outdoor festival. The lineup is always stellar, the stages and production are world-class, and the site is clean and green.

What have been some of the biggest challenges Fuji Rock has faced over the past two and a half decades?

It’s always a challenge to put an outstanding line up together with legendary artists and emerging new bands. Typhoons have caused considerable worries over the years, and COVID-19 has been very difficult to say the least.

Many fans who started coming to Fuji Rock in their 20s are now attending with their babies and toddlers. What do you think it is about Fuji Rock that keeps Fujirockers coming back for generations?

What is your favorite memory of the festival?

Too many to mention just one – watching Bob Dylan in a storm singing Blowing in the Wind, The Chemical Brothers’ lasers, Human Cannonball’s show in 2010, riding a motorcycle on the high wire with Jean Monti, Narasirato from Solomon Islands playing the Red Marquee to 5,000 people…

Any festival tips for first-timers?

Bring good walking boots and a waterproof rain jacket, and make sure to pitch your tent correctly, wear a smile, and drink plenty of water. 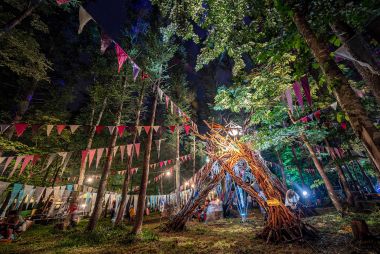 Who to check out at this year’s Fuji Rock Festival:

The Okinawa-born hip hop artist raps in Japanese, English and Okinawan. She just released her most recent album Queendom to rave reviews and international recognition.

Self-described retro-culture curator, the Korean DJ and producer plays his own mixes of classic Japanese City Pop and J-pop tracks. He made his first appearance at Fuji Rock in 2019, and is returning this year with tons of new remixes and original tracks.

Scottish post rock legends Mogwai are one of the more recent additions to the lineup. Known for their powerful and dynamic live performances, Mogwai’s tracks quickly alternate between heavy walls of sound and delicate, intricate soundscapes, perfectly suited for a picturesque forest backdrop.

American indie rock artist SNAIL MAIL reached critical acclaim with her debut album Lush in 2018 at just 17 years of age. Her Sophomore album Valentine released last year further solidifies her as one of the best indie artists of our time.