The Future of Food

A Nobel laureate and an astronaut share their thoughts

Nobel laureates descended on Yokohama Bay last month to take part in the Nobel Prize Dialogue 2018. The day’s event, sponsored by the Nobel Foundation, brought together an assortment of researchers, doctors, economists, policy­makers, intellectuals and laureates to help answer the question, what is the future of food? Despite the ambitious theme and enormous breadth of topics, the event had no shortage of smart minds to try to pull the intellectual strands together—at one point in the afternoon, six Nobel laureates shared the same stage. 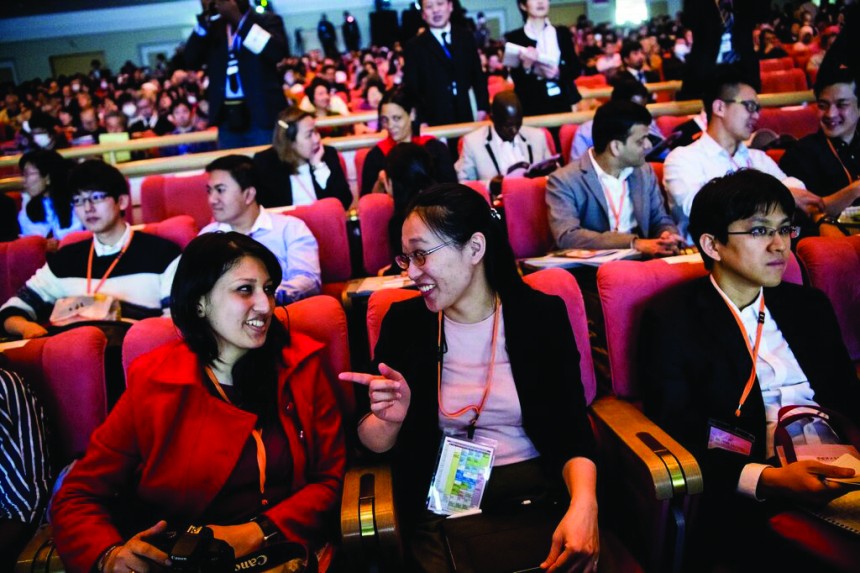 In the midst of this packed day, Metropolis sat down with two of the most accomplished Japanese scientists at the event: the first Japanese female astronaut, Dr. Chiaki Mukai, and the 2016 Nobel Prize Winner in Physiology, Dr. Yoshinori Ohsumi, for a discussion on their own research, space food, yeast proteins and what the future holds for our food.

“Chiaki Mukai, M.D., Ph.D., Astronaut.” There is no more humbling experience than being handed a meishi from someone who’s been to outer space. Mukai is the current Vice President of the Tokyo University of Science and former cardiovascular surgeon with a Ph.D. in physiology. These aren’t even her most impressive credentials. In 1994, she became the first Japanese woman in space, then in 1998, the first Japanese citizen to fly multiple space shuttle missions.  She wears these superlatives with little fanfare. Instead, with excitement for the topic at hand,  she jumps right into a conversation on the future of food in space.

Mukai makes one thing immediately clear: the days of toothpaste turkey dinners and Tang are no longer. Today’s astronaut food is sophisticated, at times delicious, and aspires to more than basic sustenance. “The food we eat in space is getting closer to the food we eat in everyday life,” Mukai says. “Currently we are in the era where space food is not tube food like you expect.” But these advancements didn’t come all at once. Back in the 1960s, when John Glenn became the first American to orbit the earth, scientists were still trying to prove that humans could swallow and digest food at all in a microgravity environment. “All body systems are designed in a way to fit earth’s 1G, 20 percent oxygen environment.” There was no guarantee that a function as basic as chew and swallow would work quite the same in near 0G.

After decades of research and fine tuning, scientists have developed solutions to the array of problems this change in environment poses. When Mukai flew her second space flight in 1998 —in fact, joined by John Glenn on his last mission — some of these innovations were already taking shape. Detailed nutritional programs were adopted during the NASA Space Shuttle program and continue to be used for astronauts at the International Space Station. For one, researchers began to consider psychology, and not just physiology. Mukai explains that more thought is now given to preferences, favorite foods and home country cuisines to maintain astronaut morale. “In a confined environment is a difficult situation. You need to continuously give the crewmember a healthy psychological situation, not only by themselves but for group dynamics.” But even with a familiar brand of biscuits or a reminder of home cooked meals, you can’t ignore the health consequences of space travel. 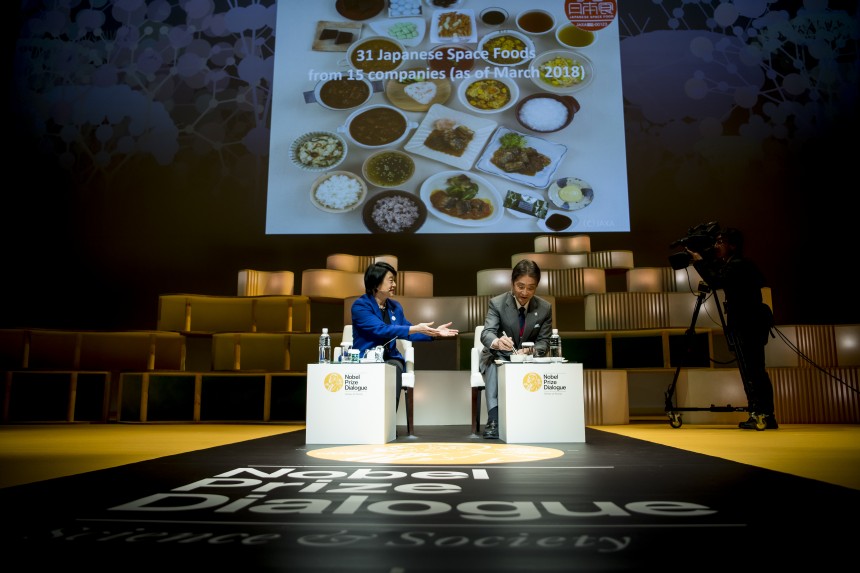 “Earth is in a cloud, protected from cosmic radiation by water and the atmosphere, especially high energy cosmic radiation,” Mukai says. This isn’t true in space. “Your body is exposed. When your body gets this much radiation, antioxidants will need to be enhanced.” In addition to radiation, Mukai cites a loss of bone density and muscle mass as frequent problems during space travel, both of which require specialized diets to counteract. Even the autonomic nervous system (unconscious processes like breathing, blood flow and digestion) suffers, an experience Mukai likens to the body fighting against a disease. Nutritionists have to insist astronauts consume select ingredients: “You have to eat it because your body will deteriorate unless you have these nutrients.” Space food’s kitschy reputation, thanks to novelties like dehydrated ice cream, isn’t unwarranted, but there are also serious health issues to consider when discussing what we eat when we venture beyond the earth’s atmosphere.

Although the NASA Space Shuttle program powered down its rocket boosters back in 2011, plans for a manned Mars mission in the mid-2030s have ramped up conversations around space food. Any mission to Mars will require long-term space habitation and unlike, say a mission to the moon, there’s no chance for assistance or supply deliveries from Earth. Mukai is involved in updating astronaut gastronomy for Mars and beyond. One of the most important steps is developing feasible space agriculture. “What makes it so difficult system-wise is there’s no gravity unless you introduce artificial gravity. Usually water has viscosity, so hydroponic cultivation can be done in microgravity.” The hydroponic systems suspend plants in water solvents rich in nutrients and minerals, bypassing the need for soil altogether. According to Mukai, “Tomatoes are one of the target crops [for hydroponic cultivation]. Also potato and sweet potato, and leaves like lettuce.”

But there’s also the issue of establishing a self-sufficient habitat once astronauts land on Mars’ harsh landscape. “Terraforming is one of the issues researchers are thinking of,” says Mukai. “If you want to cultivate special plants you may need to the change the soil.” In this case terraforming, the modifying of existing planet conditions, would mean creating a closed microenvironment and swapping out the caustic Martian dirt for something that imitates Earth’s soil. If the Moon and Mars colonies are more than pipedreams, it’s the work of space food researchers that will help make them a reality.

While Mukai’s research contemplates food in relation to exploring the solar system, Nobel laureate Dr. Yoshinori Ohsumi’s research goes micro. Or more specifically, cellular. Since the late 1980s, Ohsumi has been working with proteins in yeast, an already well-established experimental organism in biology. “Many people focus just on trendier topics, with more quick application. When I started autophagy, not so many people were interested,” Ohsumi says. As his peers pursued flashier areas of study and saw their grant requests met with more frequent approval, he buckled down on what he self-describes as “basic science,” examining the little-regarded mechanism of protein degradation called autophagy. It wasn’t until decades later, and a 2016 Nobel Prize in Physiology, that the full importance of his work with yeast became clear to the scientific community.

Proteins are the building blocks of most of our organelles, the tiny structures in our cells which perform fundamental functions in our bodies. But these organelles, like any other part of the body, suffer from wear and tear and occasional dysfunction. It falls on the process of autophagy to regulate, remove and recycle proteins in these moments. In layman’s terms, autophagy is protein destruction — the literal translation from Ancient Greek is “self-devouring.” As Ohsumi soon found out, it is one of the most basic operations inthe cell. “It is surprising, but almost all our body protein is replaced every three months without any relevant changes in appearances,” Ohsumi explains. That kind of extensive and constant replacement requires an ordered destruction, one with rules and methodologies. Over the course of decades Ohsumi became one of the first scientists to map out these processes and it’s this work that won him his Nobel Prize. 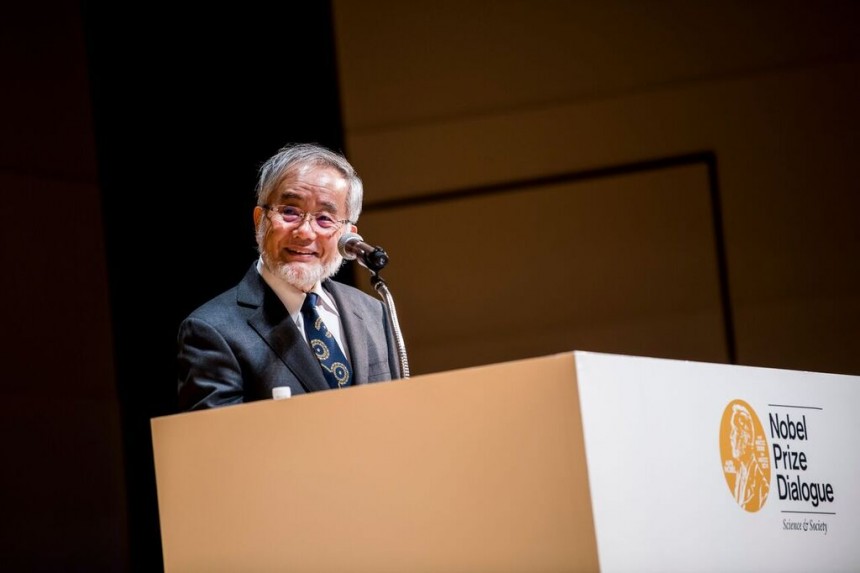 “My feeling is 30 percent of yeast autophagy is known, but 70 percent is still unknown,” comments Ohsumi. “There’s still so much foundational research needed in this field.” Even with so much left to learn, Ohsumi’s findings have already linked autophagy to some of the most prevalent and destructive human diseases. For one, the proliferation of mutated proteins in the cell is a basic part of tumor formation and cancer. Neurodegenerative diseases, such as Alzheimer’s and Parkinson’s, are triggered by the degradation of proteins in the brain and likely involve the process of autophagy. “Autophagy is very important for the elimination of excessive or harmful bacteria from the cytoplasm and quality control inside the cell. If we can control autophagic activity that will help the quality of life.”

While the medical applications of Ohsumi’s work are fascinating, its ties to the future of food are admittedly less obvious than Mukai’s space grub. Autophagy is involved in the recycling of proteins, including many of the body’s nutrients. This becomes very important in instances of starvation or malnutrition, when the cell must rely on what’s already present in the body to survive. Ohsumi’s research has found that moments of nutrient starvation (including the absence of zinc) actually trigger an increase in autophagy, leading some nutritionists and dieticians to argue that, considering its importance to general cell health, autophagy should be used as a tool in programming our diets. “I believe that high autophagy might be quite good for health. Starvation is one of the main factors of autophagic activity, so many people are interested in enhancing autophagy or will induce autophagy on.” This doesn’t have to be as severe as true starvation, but something closer to eliminating certain foods or incremental fasting, which evolutionary speaking was a routine part of day-to-day life. Ohsumi is quick to point out that there is too much research left to conduct on autophagy to apply these ideas, “It’s a little bit difficult. There’s a mix of true and false in these [dietary theories], so I cannot say definitely.” Regardless, in the future, autophagy is likely to enter conversations about what and how often we are eating and how those choices are impacting our general health.

Scientists have always noted the complicated and essential process of making proteins, or protein synthesis. What Ohsumi argues, and his Nobel Prize validates, is that going forward autophagy deserves the same treatment. “Life is so dynamically maintained. Three million blood cells are made in our body per second,” says Ohsumi, implying that the hemoglobin proteins that comprise these cells are constantly being destroyed and recycled. “Life is the dynamic state of synthesis and degradation. Degradation is equally as important as synthesis.”