Travis Payne is a study of a man in perpetual motion. The choreographer, director and producer whose legacy will forever be linked to one of the greatest entertainers of all time, Michael Jackson, is taking his message of “Dance Music Though Unity” around the world with zeal his good friend Michael would have admired. 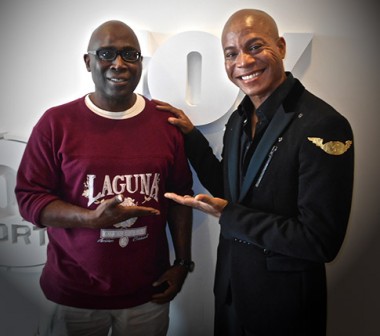 Payne’s whirlwind visit to Tokyo saw him choreograph a major production for several of famed J-pop producer Johnny Kitagawa’s boy groups, direct a video with Japanese dancer Yusei for the Travis Payne line of shoe apparel, drop by the set of the new reality show J Club TV for a beauty chat with the show’s divas and make the rounds for press interviews.

So corralling Payne for a Fox Backstage Pass interview took a little enticing on my part—a lift to the studio in a chauffeured Cadillac CTS limousine and another opportunity to talk about his lifelong love: Dance!

“For me, dance was my way to have a voice. I wasn’t really into football, baseball and basketball like most kids in my neighborhood. I always responded to seeing things like diving, gymnastics, figure skating and track. Individual sports. Dance to me was the best of both worlds. It was athletic as well as artistic. When I saw not only Michael Jackson but (Mikhail) Baryshnikov, Bob Fosse and Alvin Ailey, that’s when I really got hooked on dance,” he explained.

The pursuit of his craft landed him as a dancer on Janet Jackson’s 1990 Rhythm Nation tour, where Travis got the attention of her brother and cast in the Remember the Time music video.

“After that, I was asked to join the Dangerous Tour. Once I completed the tour we got into a choreography partnership. Through the art, the music and the dance
we really got to bond and connect. That lasted from 1992 to 2009. I really enjoyed and got so much out of it. He had a way of making people in the room with him so comfortable and so at ease,” Payne said.

For Payne dance is a celebration of life, a language all its own that brings people together.

He called Jackson his mentor and added that the King of Pop taught him more than an appreciation for dance. “He helped me understand the importance of entrepreneurism and taking the skills I learned in one area and applying them to another.”

He used that experience to launch his apparel line. “Some friends and I came up with an idea. We wanted to create something functional but stylish,” he explained. Payne produces the shoes, which are handmade, and other fashion apparel in partnership with Runic, an Italian company.

Another trait he shared with Jackson is a love of Japan. “I have been coming here since I was 14 years old. I really love it here. I always get a lot out of my time here—the arts, the food and of course the fashion.” He added, “Michael was so loved here and still is. Many of the people that reach out to me on Facebook are his fans. You can still feel the immense dedication they have for him almost five-and-a-half years after his passing.”

According to Payne, his participation as an associate producer for the film This Is It allowed him to grieve for his friend in a unique way. “Michael knew that the platform for This Is It was bigger than probably anything he had before. Then, of course, June 25 happened and everything changed. In doing the film our focus was shifted from the show to the celebration of his life. There was no time to grieve. I am almost grateful that it happened so quickly for the fact that we got to keep going and direct that energy into something else. It wasn’t meant to be sad but to inspire people.”

Payne said he has the same commitment for his own “Dance Music Through Unity” movement. “Dance speaks to everybody. It has become a universal language of its own!”

Fox Backstage Pass airs Sat on Fox at 1:30am; Sun on Fox Movies Premium at 9am; Fox Sports and Entertainment at 11:30am.