A background of bright blue paint sports pictures of cars in vivid primary colors with license plates from around the world decorates the walls outside Kincarn International School in Kawasaki. Flags of various countries flutter in the wind and under a tree in one corner of the courtyard are a bevy of toys – plastic slides and climbing apparatus all perfectly sized for the toddlers and kindergarten students who attend here.

“We just had pool day today,” James Machin, Kincarn’s School Manager tells me as we start a school tour. “Just a few hours ago this was filled with inflatable pools.” He gestures to a now empty green space the school’s four classrooms, gym room, and school office encircle.

Established nineteen years ago by Shoko Takizawa, who serves as Director, Kincarn is an international preschool that offers a unique combined English-Japanese curriculum with the goal of raising international citizens. 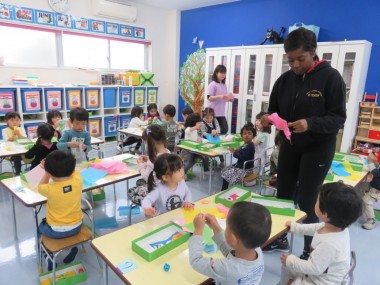 “International schools offered an English curriculum and Japanese schools offered only a Japanese curriculum,” Tokizawa says me as we talk in her office, the sounds of children just up from their afternoon naps and playing in the gym room next door drifting over to us.

“I wanted something in between, so I started this school and put the two together. I was pregnant with my youngest at the time,” she says smiling at the memory.

Kincarn, Machin tells me, is at full capacity. The school can take up to 84 students at any one time, not including the very young children at their Daruma campus also in Kawasaki. “We also have a long waiting list,” he adds.

“Our goal here is to raise global citizens and international-minded students,” says Machin. “Our students are Japanese, Indian, Chinese, Korean and mixed. We run our classrooms all in English because that’s our common language. But,” he adds, “we don’t discourage children from speaking their own language. Instead, we encourage them to play with other children from other backgrounds.”

Teachers are from the U.S., Canada, Zimbabwe, the Philippines, Germany, Belgium, Japan and Britain. The school puts on Teacher Country Days where teachers introduce food, games and music from their home countries.

“These students are here because their parents want them to have this other kind of experience and exposure,” says Machin.

More than 100 international schools are located within the Tokyo and Yokohama regions alone, with other major cities around the country also hosting a handful. Some, like Kincarn, cater solely to younger children, while others like the British School or Saint Maur, offer pre-school through high school. For families coming to a new country or culture, the choice can be overwhelming, and according to Cathy Endo, School Head for Saint Maur in Yokohama, it is not something that should be left to chance.

“If a child has learning difficulties, parents may be disappointed at the resources available to them in Japan. Parents need to search and study beforehand to know how services vary here from their home countries. When you talk to a school that’s when you find out more about the school and can make sure it’s a good match for the student.”

Endo recommends starting with organizations such as the Japan Council of International Schools (JCIS). Its twenty-eight member schools must meet a certain set of academic and ethical standards and regularly participate in organizational meetings. JCIS also provides a list of schools around the country that usually includes basic information such as grades served, the language of instruction, and student body size.

“There are also different norms here,” Endo continues, pointing out that in Japan it is normal for very young children to ride public transportation by themselves whereas in many countries this is considered dangerous. “Kidnappings are very rare here, and guns and drugs are not prevalent here.”

Dr. Detlef Fechner, Principal of the German School in Tokyo and Yokohama, also encourages parents to start their research well ahead of time and communicate. “Parents can help their children by contacting us early and getting the school books in time. Every case, though, is different,” he adds. “If we can accept a student we carefully check what to see what is needed. In some cases, we help by comparing the curricula and arrange additional lessons if there are bigger gaps.” 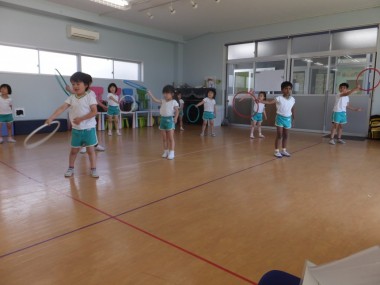 “Kids adjust pretty well, but one of the best things parents can do is keep the routine when coming to a new country,” says Machin. Children, he believes, are creatures of habit. “Keep up regular routines at home that children can settle into and anchor themselves in. Continue piano lessons or soccer practice, whatever it is that they like to do.”

He also advises parents to not worry too much. “Put your trust and confidence in the school and the teachers. One of the first languages children learn is that of facial expressions. They can tell when their parents are worried. If mom and dad are worried, they think they should be, too,” he says.

“A positive and open mindset is the most important attribute a parent can bring to their international school experience. An international school will NOT be like ‘the school back home’, but different,” he adds, “is not necessarily bad. Children, with the support of caring teachers and parents, will make amazing progress in an international environment, spurred on by the richness and diversity of experience.”

Matt Wilce, Director of Communications for the American School in Japan (ASIJ), emphasizes the importance, too, of recognizing that what existed before the move to a new place is also important. Having goodbye parties or making a memory box that children can bring with them are small rituals that make a big difference.

“Saying ‘goodbye’ properly can help in saying ‘hello’ something new successfully,” says Wilce. “We encourage parents to be open with their children and consider the positives and negatives of an unfamiliar situation. They should remind them not to be afraid to ask for help – at some point everyone at school was new.”

Children, though, aren’t the only ones making a transition. Parents, too, are saying goodbye to the familiar and stepping into a new community, culture and language, sometimes very far away from family and what is familiar.

“Happy parents means happy students,” Endo says, adding that “Not every parent is happy about the move, and when parents radiate that, their children reflect it.”

Saint Maur offers their parents a variety of opportunities — everything from a Parent Support Group to an Adult Enrichment Program — for parents to participate in and start building a community. The Parent Teacher Association at ASIJ connects existing parents with new parents through what they call a Neighborhood Village program.

“Welcoming parents into the school community is often a key ingredient in the child’s overall sense of belonging,” says Wilce. “Our school believes parent participation enhances a student’s self-confidence and overall success.”

Matthew Parr thinks of it as a partnership.

“It’s a dual relationship in support of the growth of children. Parents and teachers see a different aspect of a child’s life in Japan, and together have the full picture. Working together to support your child’s path to success and happiness is essential.”