“I don’t have goals because I’m not a motivated artist,” Nagoya-based sound producer Ramza humbly admits with a laugh. He sits back in thought and pauses, looking for the right words to express himself. “But I guess not having any goals is my style, if anything. I don’t aim higher or never want to be rich because I don’t think that’s the nature of music.” To this 34-year-old artist, making music is not a way to gain social status. Instead, it’s a pure method to bring him joy, and he knows that. “I’ll probably keep making music to explore the possibilities of it for the rest of my life and am grateful if people listen to it when they can.”

Since he started making music at 16 years old, his life has always revolved around music. Going to Tower Records, Japan’s largest music store, daily and holing up in his room to make music were parts of his routine. He was always looking for undiscovered music with his two close friends, who later became rapper Campanella and artist Free Babyronia. “It was like a competition among us; whoever found great music wins. I was one of those guys who visited Tower Records and ordered imported CDs which took months to get delivered,” he recalls.

Whether the way he listens to music is analog or digital, he’s a legitimate music freak and the convenience of digital tools fosters his desire to explore new music even more. “There are plenty of amazing artists out there, and sometimes when I’m in the zone, I could easily spend 10 hours discovering them and looking up about them online without realizing the time has passed.” 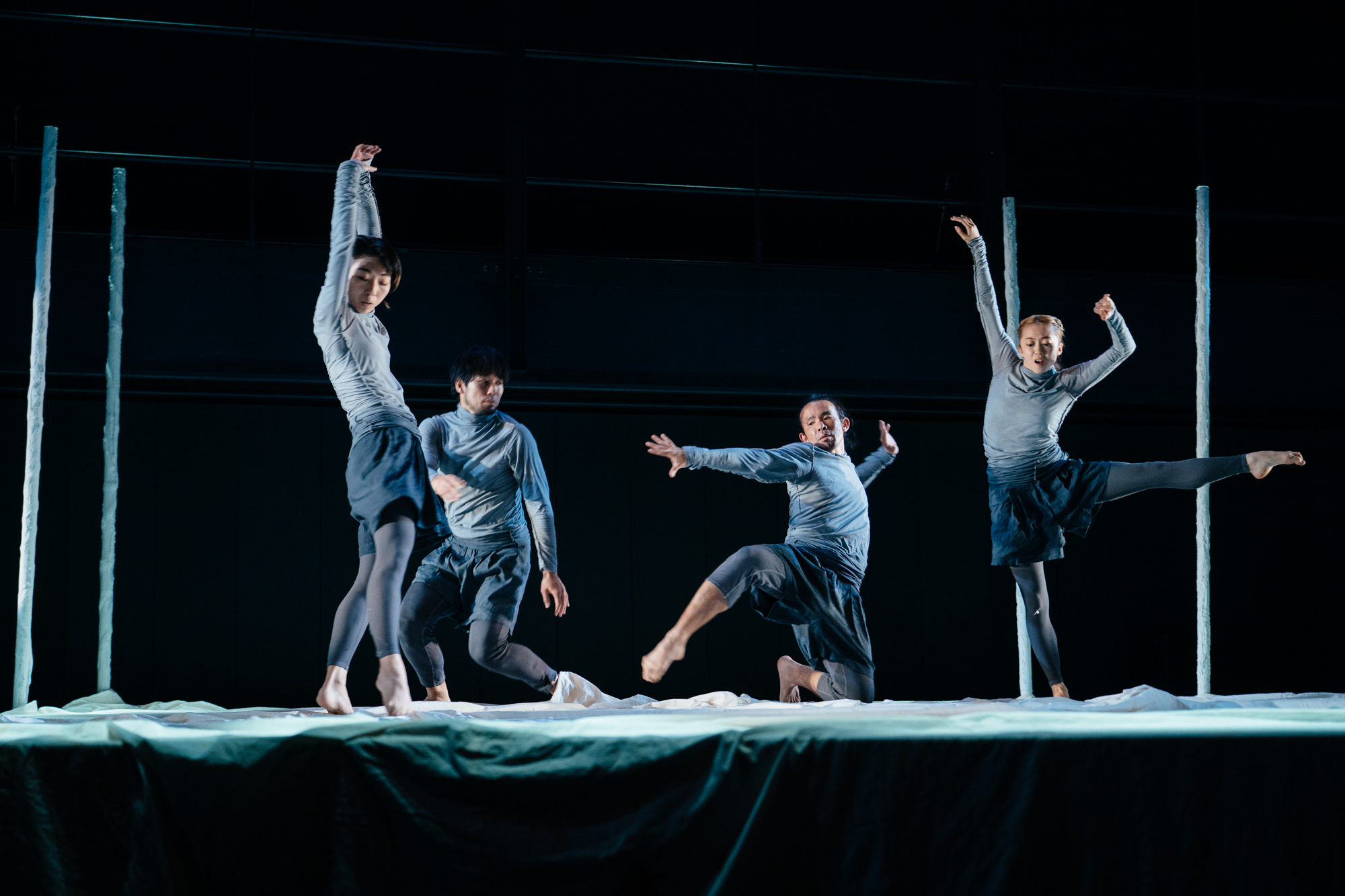 Even though collaborating with other artists is the nature of hip hop culture he grew up with, the impulse of engaging with other artists never stemmed from him. He pours his energy into his own music rather than expanding his connections. And his sincere attitude towards music led him to the opportunities he has had instead of him seeking them out: working with many acclaimed Japanese rappers or folk singer-songwriter Yuta Orisaka on top of several performances at the popular DJ event Boiler Room.

However, none of his achievements played significant roles in making him what he is today. To him, the music he creates in the future matters more than anything. “I’m just floating and going wherever music guides me to because I’m curious to see what the view would be like from there.” His musical journey won’t stop.

In September 2022, Ramza released a new soundtrack album Whispering Jewels which he produced for the eponymous theater play by a Japanese dance company OrganWorks. As he recalls the experience as “genuinely touching and unforgettable,” this collaboration opened new horizons. Whispering Jewels turned out to be proof of the crossover of Nagoya’s underground culture and the internationally renowned dance company.

Metropolis spoke to Ramza about the collaboration, his music creating process, and his philosophy towards music.

Metropolis: How did you come to work with OrganWorks?

Ramza: Shintaro Hirahara, the founder of OrganWorks, and I have a mutual friend—Nagoya-based rapper Ryoff Karma. Once I produced a song for him. Apparently, Hirahara liked the song and asked Ryoff Karma, who made it. Then he asked me if I could make music for the play that Hirahara was working on. So that’s how this happened.

M: Generally, theater plays would be considered as high culture in comparison to club events. What was it like to work with OrganWorks?

Ramza: It was genuinely amazing to see how many professional dancers perform on the stage. I’m usually alone when creating something, so working with someone on the same project was a new experience. At club events like Boiler Room, everyone is dancing, but everyone’s moves are different. For Whispering Jewels, on the other hand, all the performers were disciplined and performing along with my music. I’ve never experienced anything like this before. It was not like club events at all and it was strange.

M: I’ve watched some parts of the performance, and some of the audience seemed to be dressed far more formal and  elegantly than people at club events.

Ramza: I guess bourgeoisie people go to see these performances [Laughs]. It felt like high culture that didn’t deserve someone like me, who was once a bit of a delinquent in Nagoya. As if something wrong was mixed in the high culture environment. It was weird. But that might be Hirahara’s intention for blending these different things.

M: How do you think this experience will help you create future music?

Ramza: Not sure. It was the first time I made music for someone else. I’m curious how this experience will spark my creativity because I usually make music that excites me. That’s the only thing I care about. I never thought about how other people would perceive my music. Making music feels like finding the answer in the darkness. It’s a long winding road to go and is very tough. In the end, I feel like I’m not talented and then end up drinking a lot of alcohol until I pass out. And my wife watches me without saying anything. She probably thinks, “He’s doing it again” [Laughs].

M: How did the collaboration with Yuta Orisaka come to happen?

Ramza: A few years ago, I performed for a music festival called Mori Michi Ichiba, which is near Nagoya. I was a big fan of Yuta Orisaka and knew he was also performing on the same day. After my performance, I joined his meet and greet and asked him for an autograph. When talking to him, I handed him my CDs, saying I was a fan of him and also an artist, and that I’d appreciate it if he could listen to my music. A few months later, he reached out to me asking if I could produce a song for his album 平成 (Heisei), which was totally unexpected. I also bought his merchandise, which may have helped me give him a good impression [Laughs].

M: You’ve worked with artists from a surprisingly various selection of genres so far. Was this an intentional approach to your career?

Ramza: No, it wasn’t. Even when I found artists I loved, I wouldn’t message them like, “Hey, I wanna work with you because you are cool.” Instead, I’d usually feel like I wanted to do better or be better, or feel down just because they’re better than me. Making music is a dialogue with myself. It’s not about who you work with. And I’m not making music for money or vanity, as I believe that’s not the nature of music. So, the capacity of venues I play at or the number of sales don’t matter to me.

Also, for example, folk music events offer me to perform a DJ set if I’m in a folk music mood. If I’m feeling techno music, then a techno music event asks me to DJ. I think it’s just coincidence but I perform at different kinds of events depending on the music I listen to. I’m heading to wherever fate is guiding me to. I’m just going with the flow.

M: It seems that you’re satisfied with what you have and you’re not asking for more, which comes across as the spirit of Zen. How do you come to gain this mindset?

Ramza: I’m an insidious dark person anyway, but maybe while making music. The whole process of making music is repeating the same until I think I have finished. And it takes forever. Probably, it’s similar to the way artisans work. Since I started making music when I was 16 years old, I’ve always been facing myself, asking why I’m doing this. Even when all my friends were hanging out in the town, I stayed in my room to make music. So I naturally come to feel this way.

M: One of your previous albums’ themes was pessimism. Do you think you’re a pessimistic person?

Ramza: Totally. I don’t have any expectations in general. I know society is trying to correct many social issues, like the environment or politics. It feels arrogant to me to think humans can fix them. Why would they think they can make the world a better place? I don’t think humans have such a sophisticated existence at all. Nothing we want is possible to touch. I always feel despair and think it’s important to accept we are incapable of achieving things.

M: From Nagoya’s local underground events to OrganWorks’ theater performance, you blend all sorts of cultures. How would you want your fans to listen to your music?

Ramza: For fans of Yuta Orisaka, the song I made for him could be just one of their favorite songs of his. Or it could be a chance to discover Ramza if they wish. From my experience, I know exploring music is an endless journey, but it’s a way to enjoy cultures, for sure. I bet some of his fans have already been doing it, or some might do it in the future. If someone is curious to know more, that’s their choice. All I can say is once you come to our side, there’s no way back, and the whole new world is waiting for you.