Where play takes on a life of its own 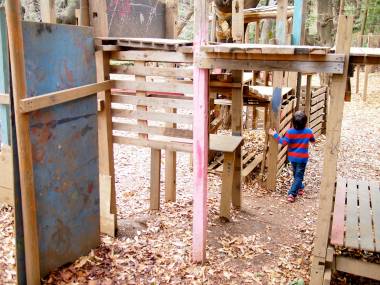 When expatriate parents in Tokyo start to wax poetic about their childhoods and the amount of time they spent building forts, running around with friends, and fabricating tools from the castaways of their family’s gleanings for enemy attacks, they may suddenly find themselves in a panic. After all, Tokyo, the lovable, well-oiled machine that we rely on for day-to-day living, can sometimes feel like it lacks the space necessary for kids to breathe and just hang loose.

Have you ever asked yourself where children can build forts in this city? Where, after a day navigating multi-level shopping complexes, train platforms and convenience stores, can a parent ferry their technology-toting 7-year-old for a dirt-under-their-fingernails, lost-in-their-own-world sticks and mud playfest?

Tokyo’s adventure playgrounds, to the uninitiated, are seemingly invisible. Often run as temporary play spaces throughout many of Tokyo’s parks, large and small alike, they are given away by the odd rope swing near a huddled group of toddlers sculpting a wet leaf pile.

Currently, the city is host to more than 80 play parks—the Japanese moniker for adventure playgrounds and free-play gatherings. Play parks range from humble gatherings in local neighborhoods to expansive play-worker staffed spaces like Yume Park—complete with hand-built zip-lines, towers, tunnels, a fire pit and a pizza-oven. 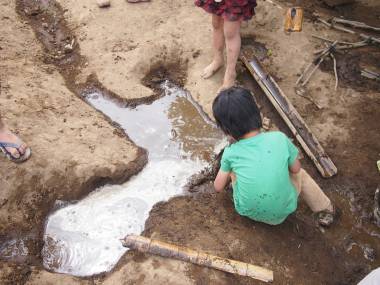 The adventure playground movement came to Japan via Europe in the 1970s as a way of advocating for greater risk and free-play in the over-scheduled and regulation-restricted lives of urban children. Since then, initiatives have expanded to include hospital-based settings and playgrounds for children healing from disaster-related trauma, such as from the earthquake in Kumamoto. Play Street, an initiative of the NPO, Tokyo Play, also hosts seasonal events that convert entire streets in downtown Tokyo into day-long community-based free-play festivals.

In these play parks, where families are allowed to cook over fires and even construct things with hand tools and other craft-making supplies, trained playworkers are always on-site to provide support. But one thing that sets Japanese play parks apart is the ethos: “Play freely at your own risk.” The phrase both communicates the unique freedoms and opportunities available at these specialized parks, as well as the deep personal responsibility for one’s own safety.

The creative spirit of these spaces is exhilarating and expansive, even if they look unpolished compared to some of Tokyo’s colorful plastic play complexes. Parents may find themselves as busy as their children after they experience such forthcoming permission to create and explore.

and every other Sunday

Near the southwest corner of Yoyogi Park