Nihonbashi is an area going through radical change. New businesses, offices, stores and an array of cultural projects have subsequently earmarked this historically significant district of Tokyo as revitalized and burgeoning.

Once the heart of Edo and latterly a fairly dreary office town, Nihonbashi is once again at the heart of cultural Tokyo. Bustling and trendy, with a tangible desire to preserve the history of the area, it’s a fascinating place to visit — whether it’s shopping at Mitsukoshi or the Coredo retail complexes, visiting shrines such as Fukutoku or enjoying the fine array of traditional cuisine on offer.

Hidetomo Kimura’s Art Aquarium project, now in its 12th year, is at the forefront of this cultural revival. Kimura, a designer and ornamental fish expert has blended his two passions into one visually extraordinary event. Goldfish and carp take pride of place in this year’s installment titled “Edo: Coolness of KINGYO”, which is located in Coredo Muromachi’s huge Nihonbashi Mitsui Hall. Goldfish are the main draw of this year’s show and it’s not by accident. Brought to Japan in 1502 (in the Muromachi period), it’s believed that, at that time, they were an extremely luxurious item that only castle lords or daimyo had a chance to see. Once the Edo period began, samurai and wealthy merchants began keeping goldfish in ponds at their estates, and goldfish were celebrated as “beautiful flowers” that decorated the geisha districts and beautifully represented “coolness” in the hot summers. The program notes state that, “This exhibition is an attempt to revive the world of the ‘stylish’ goldfish bred in the Edo period, and to usher them into the modern era, reborn in a new form.”

Art Aquarium is a real visual treat. Goldfish and carp in a multitude of colors and variations are captured in a series of visual set-pieces such as the gobsmacking “Earth Aquarium Japonism” where incandescent carp dance in a huge earth globe and the “Kingyo in the Sky,” which revives the old Edo tale of wealthy merchants building glass tanks on ceilings and gazing at the dancing goldfish above them. The event also fuses other elements of Japanese culture such as the Samurai sword or katana as well as the beautiful and refined large-scale “Picture of a Giant Screen” where goldfish swim in panelled screens. 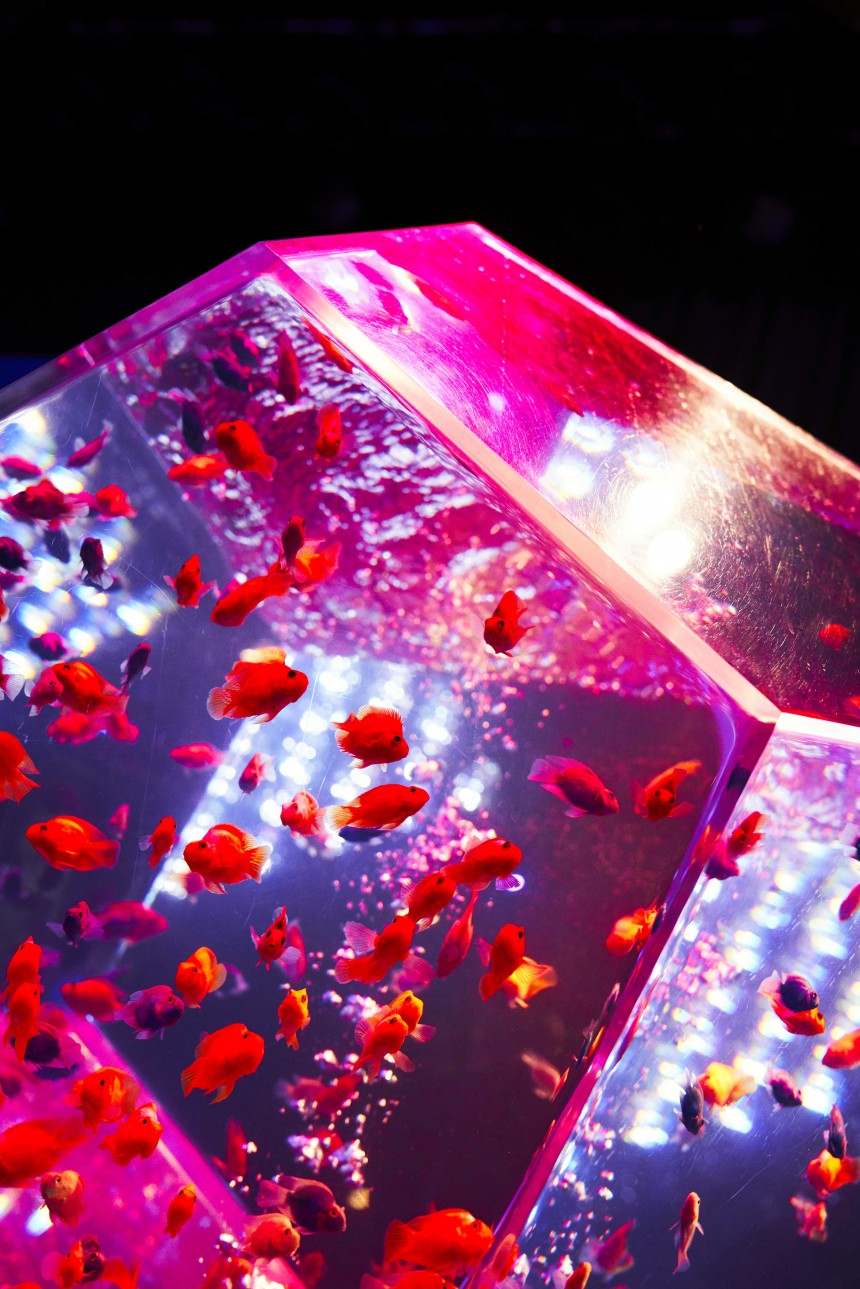 “Art Aquarium often attracts attention due to its artistic expression and ideas, but its greatest pride lies in the underlying knowledge and skills used in bringing an ecosystem into existence and making use of its fish,” says Kimura. “The fish swimming here receive nutritious meals, high-performance water purification devices, and the gentle care of the biological management staff who watch over them 24/7, even through the night. They lead happy lives, receiving the maximum amount of affection from people both as ornamental fish and as living creatures.”

It’s a show for everyone — families, couples or even solo visits where guests can lose themselves in the aesthetics or contemplate Japan’s rich cultural heritage. At night the space, lighting and sound transform — creating an evening lounge where visitors can enjoy original kingyo cocktails and celebrated Dassai sake. On weekends, experience some of Japan’s best DJs as the location morphs into a cutting-edge club lounge. It’s a multi-purpose event space which dances and shifts much like the fish on display.

Art Aquarium also runs special events such as the Geiko and Maiko night which runs from August 6 – 9 and a Disco Night Aquarium with world famous DJs. It’s a curious and captivating event which represents Japanese heritage, contemporary design and a paradigm shift in terms of putting Nihonbashi on the capital’s cultural and entertainment map. 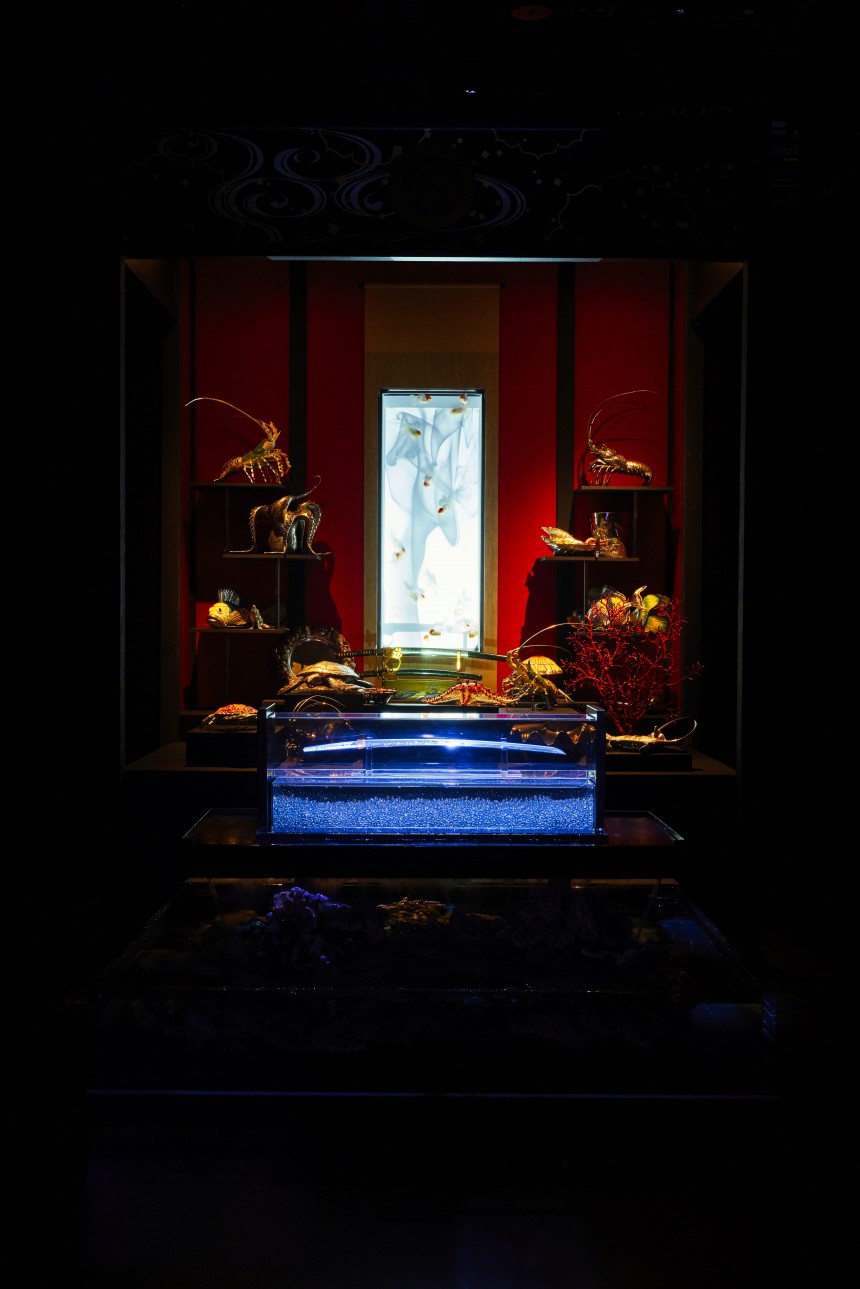