History by the airport

Chiba is something of a tourism anomaly. The prefecture swarms with travelers each day, though few actually step out as they zip between Narita Airport and Tokyo. But, if you have the time and feel inclined—or if you’re stuck on a layover and don’t have the hours to make it to Tokyo—there is a lot to see in Chiba. And you needn’t stray too far from the airport. 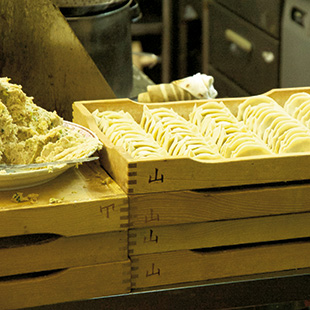 Unlike most major outlying transportation hubs, there’s a lot to see around Narita beyond its runways and terminals. A short commute from the airport, the city of Narita itself packs in all the usual excitement of modern Japan, while at the same time offering a glimpse into its past.

Narita has its moment in the sun each year when millions of people flock to the ancient Naritasan Shinshō-ji temple over the New Year period to make their hatsumode (the first shrine visit of the year). For the rest of the year, visiting the temple is a serene experience, and you can stroll comfortably around its vast grounds and the imposing Naritasan Park that surrounds it.

The Shinshō-ji temple sits at the foot of Narita’s similarly iconic Omotesando—a wonderful Edo-period shopping street that brims with souvenir shops, restaurants, and people. Narita is known for its unagi (freshwater eel), and there are numerous restaurants along the street that specialize in the wiggly delicacy. Among the favorites are Surugaya and Kawatoyo Honten. At Kawatoyo Honten, you become privy to the process as the chefs gut and skewer the eel in plain sight. But as with many cuisines, the process is more than justified by its outcome. The crowd-pleasing unagi bento (¥2,500) alone is reason enough to visit Narita.

At its heart, Narita is a typical Japanese city: an intersection between new and old, with the regular slew of bars, cafés, and shops—plus the odd love hotel—assorted among a mix of Edo- and Meiji-period architecture. And, like the rest of Japan, Narita shines when it comes to food. Aside from unagi, the city is also famed for its gyōza. The humble Gyoza no Osho Keisei Narita Ekimae is a short distance from Narita Station and a favorite with locals. If you’re visiting Japan for the first time, this is great chance to sample the beloved dumpling (¥240 for a plate of six), which you can watch being prepared in their open kitchen.

Two stops from Narita, Sakura has a reputation for being a town of cherry blossoms. Each year from March to May, people flock to the area to see the superlative tree in bloom. But even if you’re not around during spring, Sakura is still worth a visit.

Ten minutes by foot from Sakura Station, the ostensibly unassuming Sakura Samurai Street contains five of the few remaining samurai houses in Kanto, three of which are open to the public (admission ¥100-210). Here, you can see traditional Japanese samurai life, with collections of well-presented rooms holding quotidian artifacts from the period, such as cooking utensils and porcelain latrines.

A further 10-minute stroll leads you to the hilltop space that holds the ruins of the historic Sakura Castle—an important stronghold during the Sengoku and Edo Periods—now an expansive parkland that’s popular for cherry blossom watching. The park is also the site of the impressive National Museum of Japanese History. Regardless of the season, the park is a perfect spot to take in some typical Japanese serenity—a reasonable gift for those in the process of or approaching a grueling international haul.

Express trains from Tokyo to Narita take around 90 minutes. Trains between the airport and Narita City take around 10 minutes.

Planning a trip around a layover? You might also consider the Narita Transit Program, which offers various guided tours from the airport to Narita City and surrounding areas, free of charge; tours last between two-and-a-half and three hours. Bookings can be made on the spot at either terminal after arrival at the Transit Tour Desk.

Is Hanami Still Happening in 2020?