Tokyo has been a city of cyclists for decades, but how prepared is the capital for the post-pandemic bike boom? Chad Feyen, deputy head of mission at the Cycling Embassy of Japan, discusses the highs and lows of living in the 16th most bicycle-friendly city in the world.

Riding a train during rush hour in Tokyo can be a painful experience at the best of times. Add to that the risk of catching COV- ID-19, and it’s easy to understand why an increasing number of residents in the capital are seeking alternative ways of commuting.

For those who live too far from the office and are unable to work from home, cycling is a viable option that’s healthy and good for the environment. With an estimated modal share of 16 percent (according to the Institute for Transportation and Development Policy), it’s clearly a popular way to get around—but just how bike-friendly a city is Tokyo? 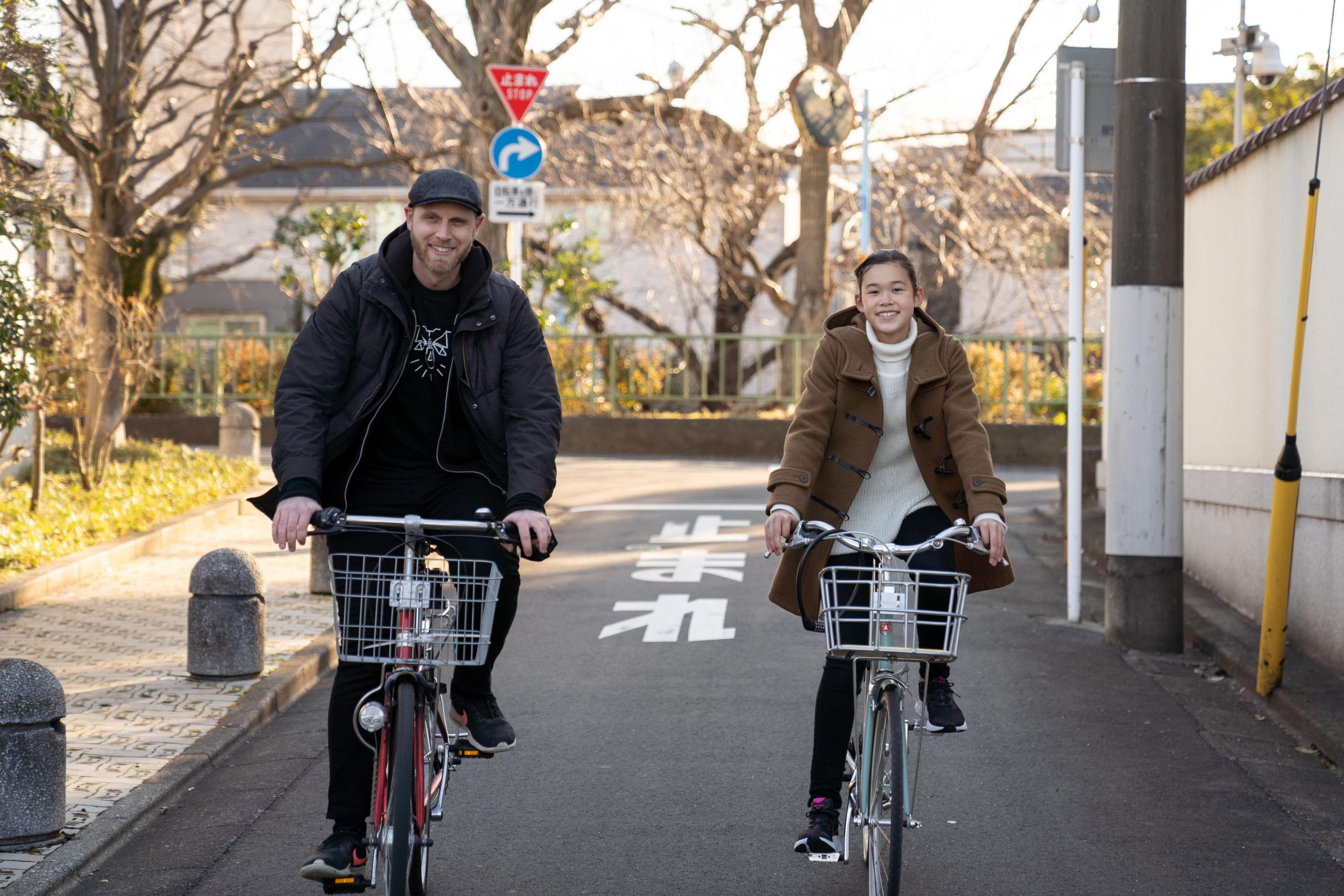 “In terms of infrastructure, not very,” says Chad Feyen, deputy head of mission and chief aesthetics officer at the Cycling Embassy of Japan. “Tokyo’s a great place to cycle as it’s so compact and there are many back streets to avoid traffic, but it’s not very well designed for cyclists.”

HE DESCRIBES TOKYO’S CYCLING infrastructure as “a bit of a mash-up,” lacking the kind of connected network you see in other major cities. “The number of cycle lanes has continued to increase, which is positive,” Fey- en adds. “Unfortunately, what you usually see is a small stretch of blue paint on a path and then it just ends. It feels very disjointed and doesn’t make for a good cycling experience.”

A graphic designer by trade, Feyen was one of the Cycling Embassy of Japan’s original members when it was founded in 2015. Following in the footsteps of other countries with cycling embassies such as the Netherlands, Great Britain and Denmark, the organization set out to import the best cycling practices and research from around the globe while also promoting Japan’s dynamic cycling culture to the world.

“We’re a small group with a passion for promoting cycling,” Feyen says. “We’ve created various events and published handbooks. In 2019, we handed out the first Tokyo Infrastructure Cycling Award (to Sakura Sando in Adachi-ku). We also lobby the government, but over the past few months, our focus has switched to engaging with the public in an at- tempt to bring about change.”

The embassy’s main drive at the moment is the Change.org campaign to put in more “pop-up” bike lanes in Tokyo in the wake of the COVID-19 crisis. Aimed at helping cyclists maintain a spatial distance to minimize the risk of infection, these lanes, also known as “corona cycle paths,” popped up in several cities around the globe last year.

The densely populated region of Kreuzberg in Berlin, one of the first areas to set up the pop-up lanes, shared practical advice on how to implement them safely in just 10 days. The petition to install them in Tokyo gained thousands of signatures and has been given to various municipal governments, but has yet to have the desired effect.

More on cycling in Tokyo:

“You’ll often hear things like ‘it sounds nice, we’ll consider it,’ or ‘it’s possible in the future,’ but then the future comes around and there are different people in charge or other issues come up, so it gets pushed back again,” Feyen says. “The truth is, Tokyo moves quite slowly, and on top of that, you have wealthier lobby groups who are much louder, which puts us at the back of the line.”

Feyen also believes that when it comes to cycling in Tokyo, things generally work quite well despite the lack of infrastructure, as people are courteous and good at following the rules. Subsequently, there isn’t a big push for reform, and this lack of urgency to bring about change is arguably one of the reasons why Japan’s capital dropped in the Copenhagenize Index of bicycle-friendly cities from ninth place in 2017 to 16th in 2019.

Since 2011, the biennial index has ranked cities on their efforts toward reestablishing the bicycle as a feasible, accepted and practical form of transportation. More than 600 cities with populations over 600,000 are logged into the database and analyzed on their bike- friendliness. Unsurprisingly, given the name of the index, Copenhagen topped the list for the third time in a row in 2019 with a total score of 90 percent—almost 35 percent higher than Tokyo. 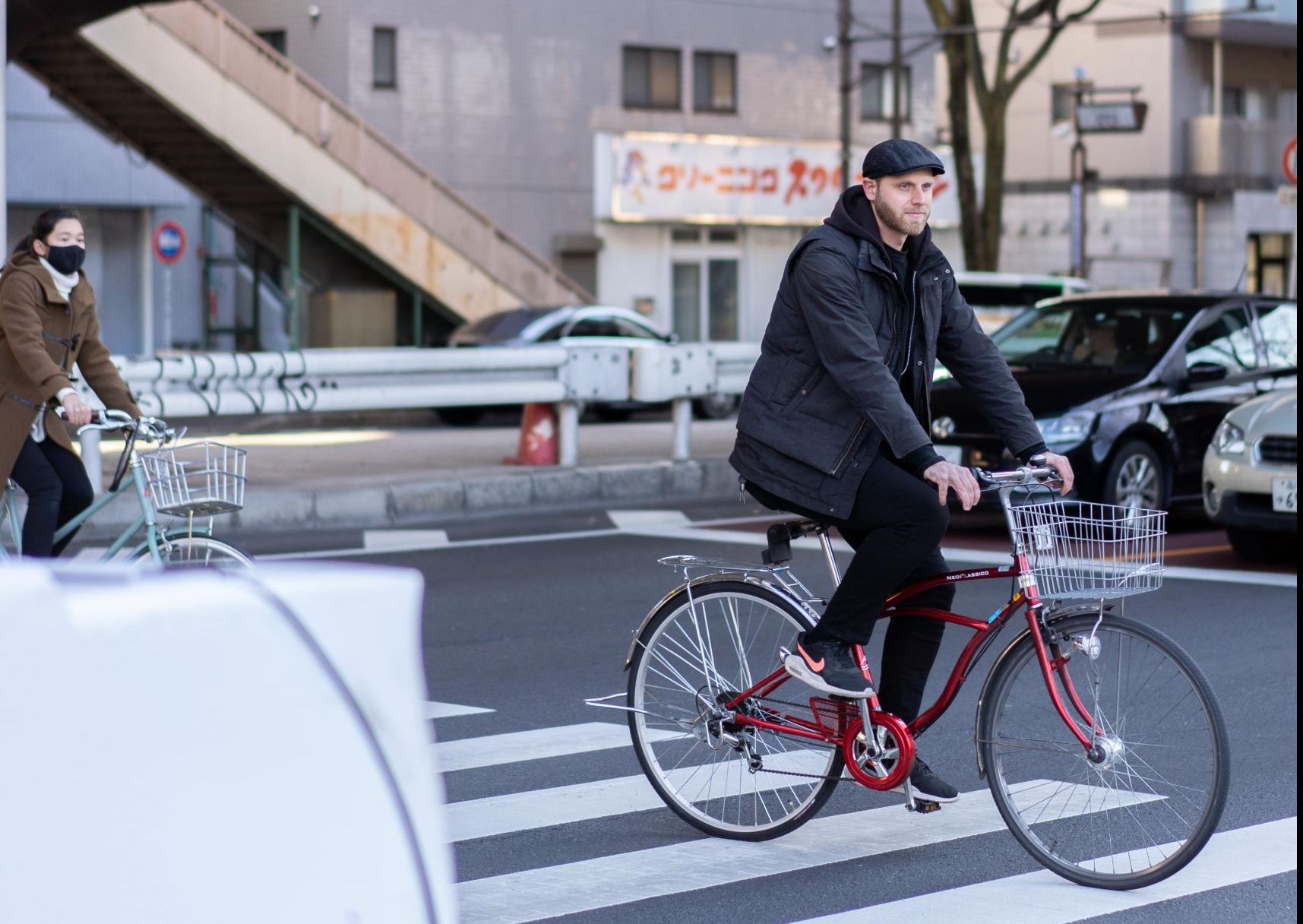 A Tokyo cyclist of over 10 years, Feyen is on a mission to bring about change in the capital. | Credit: Matthew Smith

“Despite the deep-rooted cycling culture in Tokyo, reaching a new level in the development of bicycle mobility will require local authorities to invest in dedicated cycling infrastructure that encourages inhabitants to cycle longer distances in this enormous metropolis,” writes Clotilde Imbert, director of Copenhagenize France.

FEYEN AGREES, though that hasn’t put him off riding around the city on two wheels. He accepts that Tokyo has a long way to go to catch up with cities like Copenhagen, but also points to positives such as the rise of bike-sharing programs in the recent years and an increase in the number of bicycle parking lots.

“It may not be perfect, but it’s a city I really enjoy cycling around,” he says. “I’d encourage more people to give it a try, whether that be on an expensive road bike or the iconic mamachari. People will talk about the health and environmental benefits of cycling and that’s true, but for me, it’s just a fun thing to do. It sparks joy and makes you feel like a kid again. No other form of transportation has that effect.”