There’s a fiesta on my taste buds

Given that great Mexican food is difficult to find in Tokyo, it’s always a delightful surprise to come across a restaurant that serves up good-quality food from America’s southern neighbor.

Located near Nishi-Ogikubo Station, El Quixico is a small eatery situated above an Indian restaurant, and a partially-covered sign which reads “Mexican Food El Quixico” makes this place effortless to find. The interior is decorated wholly with an array of Latino-themed paraphernalia, including puppets, sombreros, and maracas. 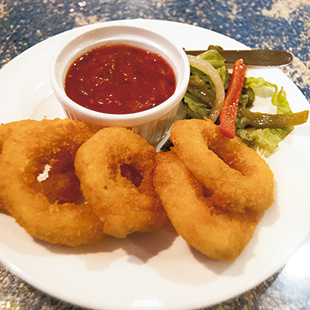 Everything on the menu is relatively inexpensive, with food priced from ¥300 to ¥3,200 and drinks from ¥300 to ¥900, making this an ideal place to go for those short on cash.

I started with the beer. The Negra Modelo (¥700), an import from Mexico, was the first thing that I ordered. Served with a lime poking out of the bottle, the brew was tasty and went down easily. Perhaps the best part about this beer was that it stayed carbonated even when the bottle was almost empty, never going flat.

Within five to 10 minutes of ordering, the fried calamari (¥500) arrived. Served with vegetables and dipping sauce, the squid was soft and juicy and the deep-fried outer layer crunchy. Ultimately, it was the delicious sauce that brought out the flavor in the calamari.

The chicken burrito (¥1,100) took a little longer to arrive, but it was well worth the wait. Bathed in a bright red sauce, covered in cheese, and topped off with some vegetables; this dish was an exquisite mess. Initially, when my fork first pierced the burrito, I was taken aback by how easy it was to slice through. The sauce had softened the burrito to the point where I felt as though I was driving the fork through a stick of butter stuffed with chicken, beans, and cheese. I was left stuffed and contented.

My only complaint about El Quixico was the absence of chips and salsa from their menu. Considering that this is a standard, served complimentarily in most Mexican restaurants, it was unusual that this one didn’t have it on offer. It would have been nice to munch on something while waiting for my food.

Aside from this, the establishment is a nice and quiet place for dining. Being the small and uncrowded place that it is, El Quixico is a secret gem waiting to be found.

The Hole In The Wall

Bright flavors and slow-cooked meat at this Nakameguro taco bar