Traditional Japanese embroidery techniques such as sashiko are more practical than artistic, but check out this new style of badass embroidery. A wave of Japanese embroiderers are attracting global attention for designs which range from the dark and weird through to comedic and cute.

Spurred in part due to the rise of photo and image-sharing apps such as Instagram and TikTok, which gave the art a global platform to speak for itself, there has been a recent wave of contemporary Japanese embroidery artists flexing their needle-and-thread talent. 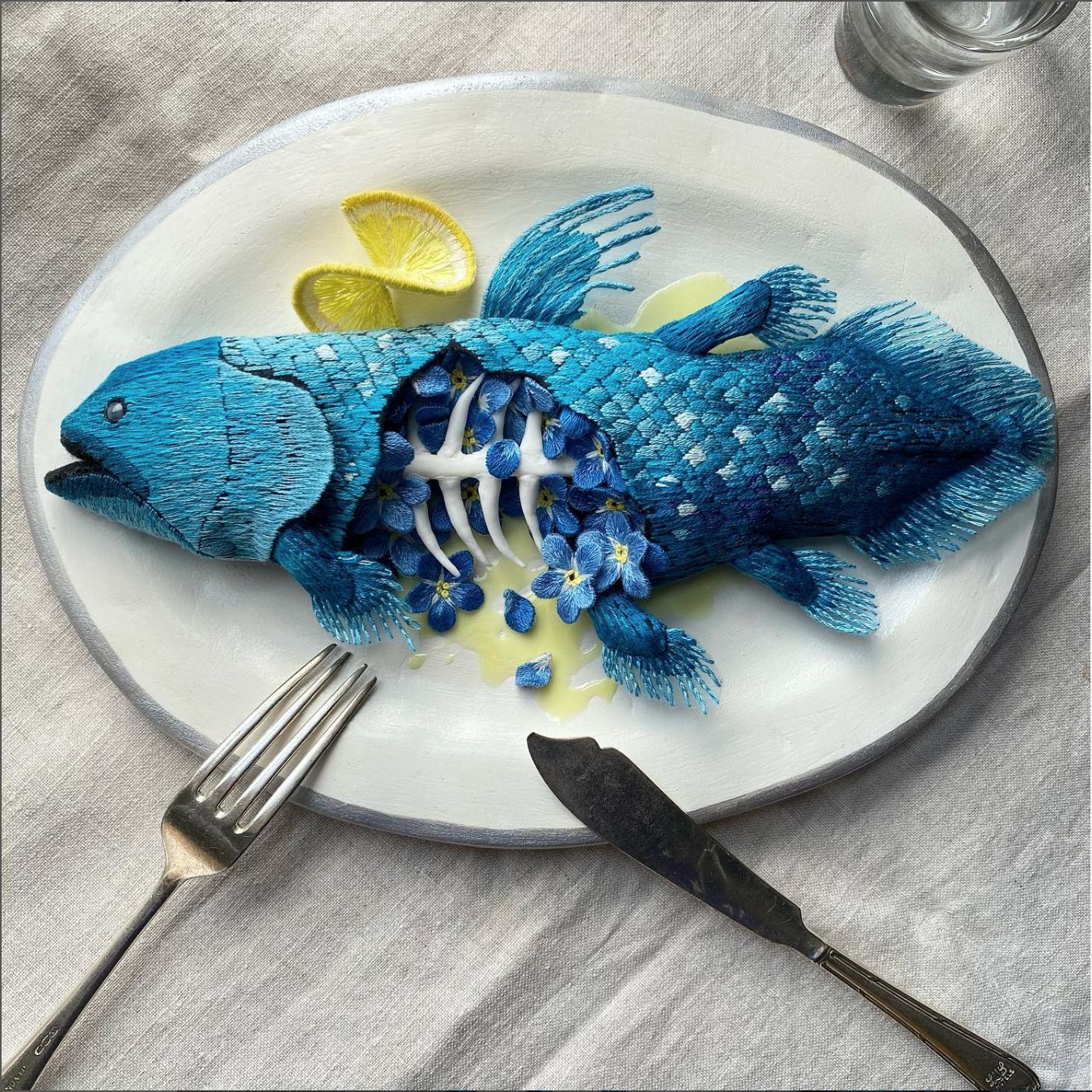 Take the eye-catching Genkakulemon A.K.A 幻覺レモン, who creates imaginative pieces using 3D embroidery and modeling clay. Newcomer Chika Mizusawa, who held her first exhibition in Tokyo less than one year ago, has seen followers flock to her Instagram page for her surreal embroidery models and details of the painstaking embroidery process. Genkakulemon’s most popular piece to date is a bright blue fish with the title ‘Coelacanth Lemon Butter Meunière.’ Complete with embroidered lemon slices and handmade clay fish bones.

In a prior post she shares the process behind the exquisite piece, showing various steps and where she went wrong. Doing this allows followers to appreciate the time and effort that goes into each piece. 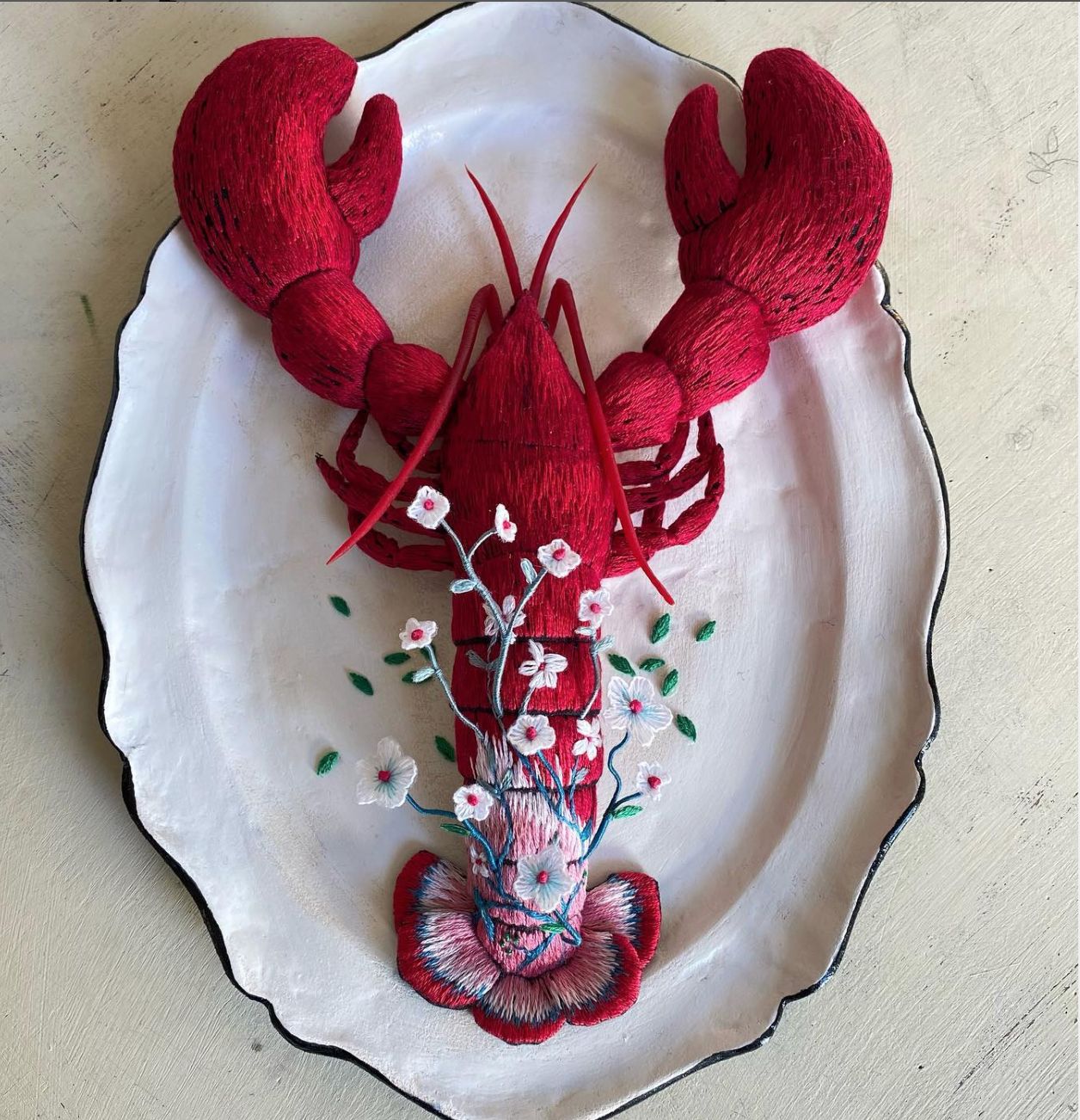 ‘The Flower-Growing Lobster Present’ by Genkakulemon

Other designs include ‘The Flower-Growing Lobster Present’ which features a bright red lobster – embroidered, of course – resplendent with delicate flowers crawling up its back. Alluding to Japan’s love of fish dishes, she displays it on a china plate.

Next up is the serial-memer, HANA. Featuring references from pop culture and Japan-specific topics, her embroidery comes with a smile. Her small, detailed works include Napoleon Dynamite, with his infamous ‘Vote for Pedro’ t-shirt and Salavdor Dali, resplendent with a 3D, twirly mustache. 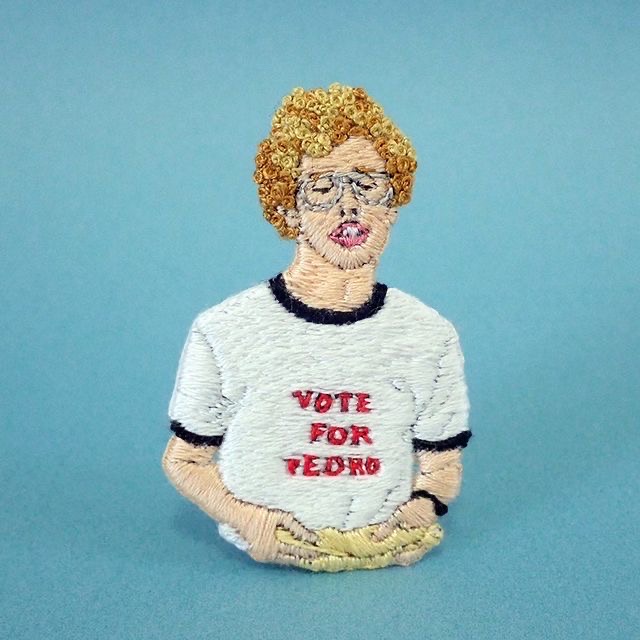 Vote for Pedro by HANA

Closer to home sees her recreate Taro Okamoto’s Tower of the Sun, and another brings a meme to life, that of ‘Uncle Reiwa.’ Uncle Reiwa is the now-Prime Minister Suga, who spurned a milliard of memes, thanks to his deadpan announcement of the start of the Reiwa era. 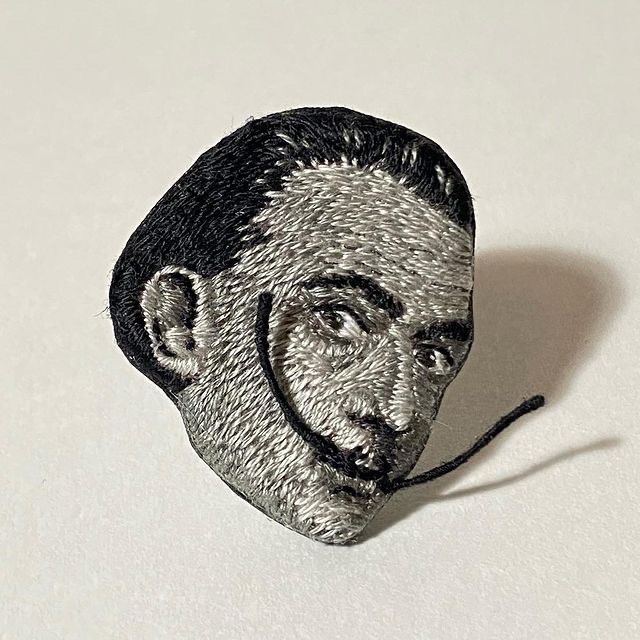 On the ‘kawaii’ side of things is ume.kaori, a professional embroiderer based in Saitama. Known for her kitsch designs featuring animals from rabbits to kittens and even otters, she regularly holds exhibitions and pop-ups around Tokyo.

Focussing on the 2D, Kaori’s brooch designs incorporate beads, pearls and gemstones with a twist. Opulence abounds as rabbits have jewelled bikinis, cats wear elaborate dresses with pearl necklaces and carry handbags. Elsewhere, otters hold gems in the place of the traditional shell. 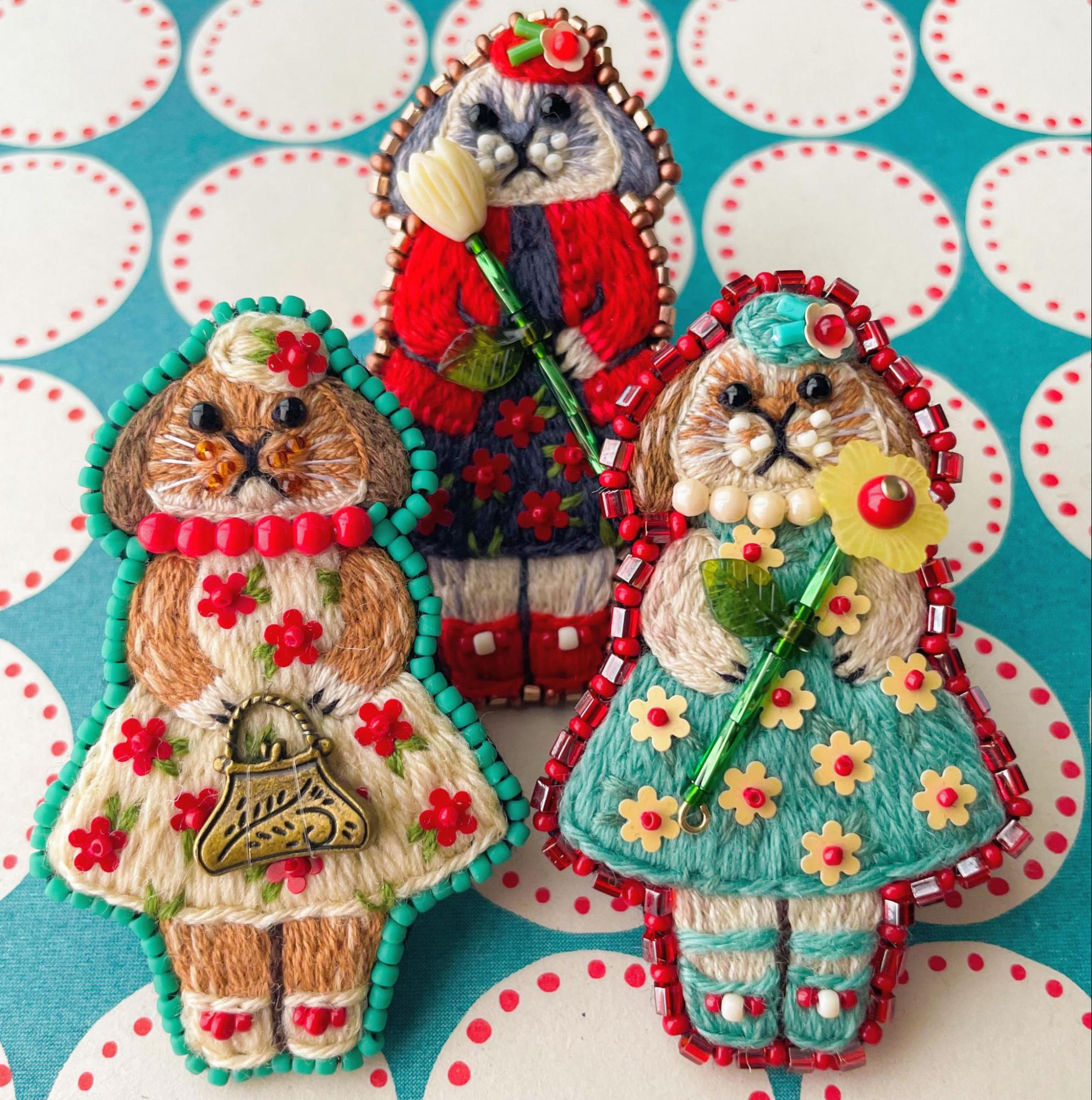 Another embroidery artist who incorporates materials into their designs is the artist and author, PieniSieni.

Noted on her blog as a ‘Bead and Felt embroidery Artist,’ she makes the felt flowers which she entwines into her designs, which focus on lifelike botanicals and insects. She is known for devising a method of doing 3D embroidery freehand, which she teaches as a lecturer in the Ikebukuro area of Tokyo. 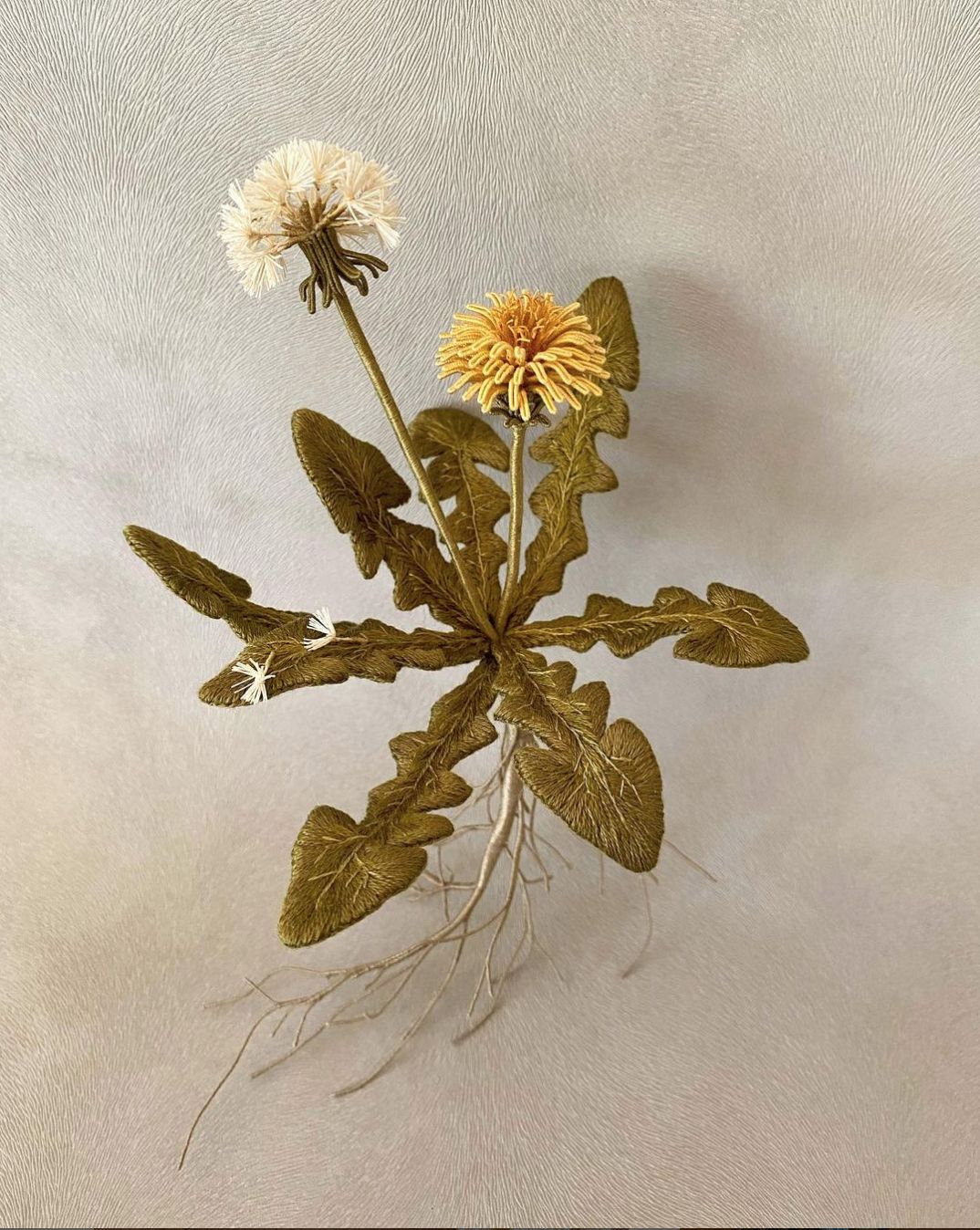 PieniSieni regularly holds exhibitions of her work, in which visitors can admire the life-like flowers, ranging from realistic dandelions with roots to bunches of flowers. Eager embroiderers worldwide can learn how to make the designs themselves, as her books have been translated into French and English.

Over in Portland USA, Sawako Ninomiya has held exhibitions with the aim to introduce Japanese embroidery to the world since 2017. Prior to her Portland experience, Ninomiya taught embroidery to disadvantaged communities in India. 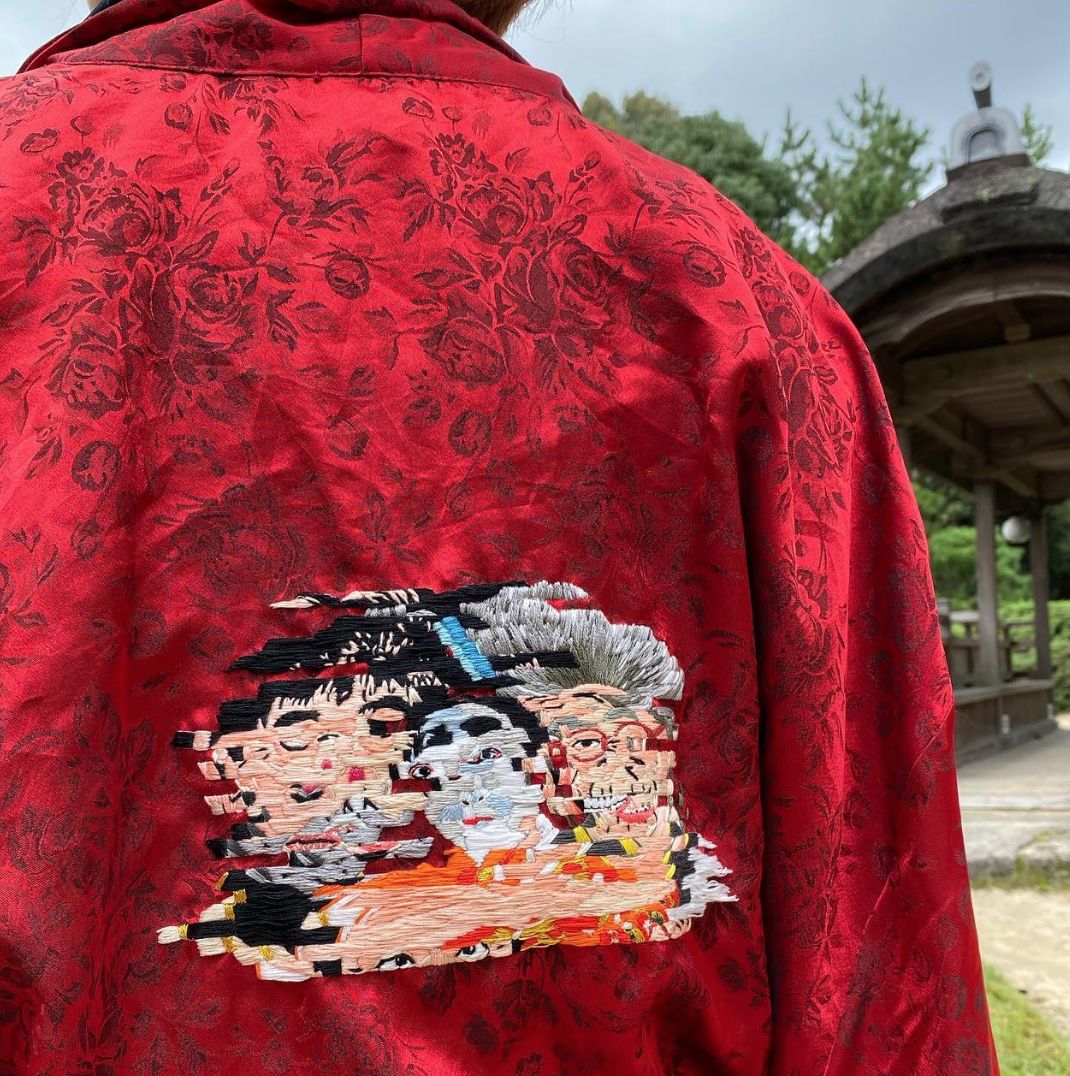 Now back in Japan, until 2020 Ninomiya ran the Tambourin Gallery in Tokyo, teaching embroidery and holding showings of her works. Nowadays, she works as a consultant and a fashion industry go-to for embroidery in Tokyo. Her designs have been worn by models including Serena Motola and appeared for brands such as APC France.

Her signature style is glitchy, often featuring pop culture figures and artists such as David Bowie and Yayoi Kusama, the latter appearing with two and a half eyes thanks to Ninomiya’s block glitch effect. Another notable work was her hefty replica of the world’s second-largest mountain, K2, which featured as much yarn as the mountain itself at 8,611 metres.

In a culture in which tradition is valued as much as contemporary designs, these artists are making their mark. Some incorporate flowers into their designs, others have more of a pop culture feel, all are original and exciting.