One man. One towel. One fan. A hysterical audience.

For as long as humans have socialized in groups, stories have been told. It is how we learn, share information, develop relationships and entertain ourselves. Whether it is a casual get-together among friends or a performance by a professional, the stories and storyteller remain with us long after the event is over.

At first glance, it is hard to imagine how rakugo, a classic form of Japanese comic storytelling that dates to the Edo period, could have withstood the test of time. In an age where video games, action movies and ever-present smart phones dominate our lives, how can a single, kimono-clad performer seated on a cushion on a bare stage compete? Even a stand-up comedian, who may not have many props, can strut across the stage to command an audience’s attention. A rakugoka, in contrast, remains seated, with only a hand-held fan and small towel to be used as props. Drop in to any rakugo performance, however, and you will find an audience laughing hysterically. 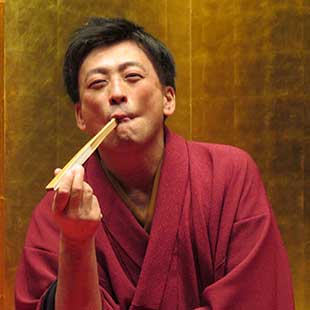 Kimochi-san is a performer who brings such stories to Japan’s English-speaking community. In a recent interview after a private performance in Yokohama, Kimochi-san said that foreign audiences can enjoy rakugo because, although the stories are ostensibly about Japan and Japanese experiences, they are really more about human relationships and day-to-day experiences and emotions that speak to the commonality in everyone. Rakugo’s classic stories date to the Edo period, but for the last 400 years, rakugoka have adapted them to suit their particular audiences. In addition to the traditional stories, Kimochi-san creates modern rakugo stories based on the news, movies and personal experiences.

Before he started rakugo, Kimochi-san fell in love with English as a young man. “I wasn’t that interested in rakugo,” Kimochi-san explained, “I just wanted to improve my English speaking and writing skills.” But there were few opportunities to do that in his native prefecture of Aichi. English rakugo provided him with a means of studying English on his own. The familiar traditional stories helped him in improving his comprehension and vocabulary. He then moved on to creating his own characters and stories. “Rakugo was like a big language lesson for me.”

But while practicing alone is one thing, performing in front of an audience and making them laugh is quite different. To perfect his performance, Kimochi-san turned to movies and drama workshops. Actors use movement, sometimes expansive, sometimes subtle, to bring life to their characters. The antics of Tom Cruise taught Kimochi-san how to use his body to keep the audience’s attention, and the depth of Tom Hanks’ acting helped the impact of facial expressions. “Every time I watch him, I am surprised at the power of his eyes,” he said.

These acting methods improved Kimochi-san’s ability to get his audience to visualize and empathize with his characters and scenes. In rakugo, the audience is expected to participate in the story by imagining the scene described by a rakugoka. By employing modern acting techniques, Kimochi-san can more easily draw an image that his audiences understand, thereby helping them imagine the scene he describes. Into that scene, he drops his punch lines, the catalysts that release the laughter.

Kimochi-san said rakugo has similarities with stand-up comedy. The performer builds the story, draws the audience in with gestures and facial expressions, performs characters and dialogues, and then hits the audience with the joke. Rakugo’s pacing is different, however, he said: “In stand-up comedy, there are many laughing points. I need to learn their methods because laughter can build upon laughter.” But in rakugo, the set up takes longer. There are more pauses and fewer punch lines.

Still, Kimochi-san said it is, in part, the slower pacing that makes rakugo exciting. The pauses give him opportunities to read the mood of the audience. The slower speed also enables him to touch the audience in an emotional way that stand-up, with its fast pace, doesn’t usually do. The combination of a steady stream of jokes, like in stand-up, and the management of rakugo’s pauses is an advantage, he said, “because it can help expand the laughter.” Or the tears. Some stories are tear-jerkers, he said, so be sure to bring some tissues.

On December 11, Kimochi-san will perform his domannaka yose (rakugo recital) in Yokohama at Kanack Hall. The performance begins at 7pm. Tickets are ¥2000 and must be purchased in advance. Ticket purchase and more information can be found at www.kimochi2010.com.