Often seen at festivals or Japanese pubs, chochin lanterns, traditionally made with a bamboo frame covered in paper, have been a source of light in Japan for over 500 years. They are said to have been introduced to Japan as a Buddhist ritual item from China in the Muromachi period.

Although up until the mid-Edo period, only the emperor and upper class were using chochin, as candles became mass-producible, these lanterns spread to commoners as well and different kinds of chochin began to be used by different kinds of people.

Those days chochin were used as flashlights or indoor lighting, much like modern neon signs. From Buddhist ritual supply to everyday lighting equipment, chochin have adjusted with the times and are now lit up with light bulbs or battery-powered lights and therefore have no safety issues.

Hara Koushu handle a variety of lanterns from Obon chochin used as Buddhist ritual items, lighting equipment and more. The company believes, however, that the ever-evolving portable chochin that was a trend back in the Edo period will be beloved by foreigners as well. Besides being collapsible, you can light up the lantern with battery-powered lights so you can display it anywhere or take it with you on the go. 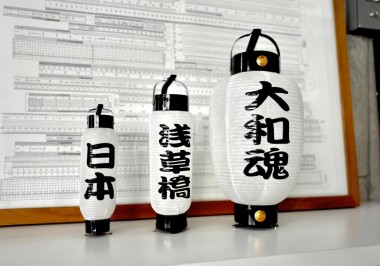 The biggest feature is that you can customize your chochin by sticking a single colored PVC sticker of a design of your choice. Although there is limited space to place your stickers, you are free to stick on the alphabet, hiragana, katakana or kanji. Unlike handwritten chochin, you can order these quickly for low prices so even those traveling with limited time can have their chochin made in minutes.

Hara Koushu offers a variety of sizes, even tiny ones which you can use as a hair accessory. You can start ordering from just one chochin, when you want, whenever you want and use it for all sorts of situations from festivals to parties. They can even create them using your company logo, etc. (requires image data), so customize however you want and use it as a party decoration and more. The time required to make these also depends on the amount, but whether as a party decoration, garland, or party favor, they will present a beautiful image of Japan.

Though they will require some time, Hara Koushu accept all kinds of requests whether it be genuine handwritten chochin, those using traditional washi paper, an original chochin printed with your own picture, or even oversized chochin, so feel free to contact them.