It’s winter in Tokyo and warm lights elegantly illuminate Kagurazaka, the tinkle of French music soundtracking the high-end neighborhood. Centered around a sloping shotengai (shopping street) lined with eateries and shops, this is a pocket of old Tokyo that revels in its long history.

The area is a still active hanamachi, or “flower town” — euphemistically referring to a district designated for geisha houses. In more recent years, Kagurazaka has also become Tokyo’s unofficial French quarter, with many businesses serving the sizable French community.

This solaced slice of Shinjuku Ward is served by both the Tokyo Metro Tozai Line and Toei Oedo Line. It’s the area’s strategic location close to Edo Castle’s Ushigome-mon gate that has shaped its story.

Although Edo Castle no longer exists, Kagurazaka retains its privileged position. Several of the geisha houses that arrived in the late 19th century are still in business, while nearby university campuses and publishing houses add a youthful, intellectual edge to the area.

Infused with traditional Japanese aesthetics, the significant French community arrived in the area due to the proximity of organizations such as l’Institut Franco-Japonais de Tokyo. Because of this, Kagurazaka boasts the biggest cluster of all things French and delicious — bakeries, restaurants, wine and cheese shops — in the capital. 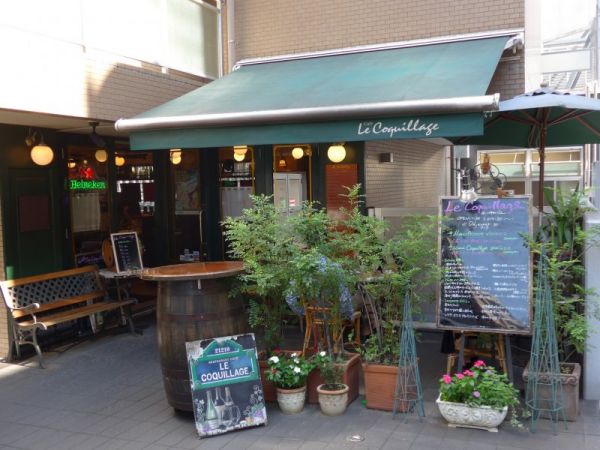 This enigmatic mix of cultures and history attracts day-trippers to the neighborhood in search of romantic ambience, good food and old-fashioned eateries. The main thoroughfare is pedestrianized in the evenings, Sundays and public holidays, and throngs with strolling couples and families.

Founded in the 1650s, Kagurazaka’s main road was established as a route connecting Edo Castle to the residence of high-ranking samurai, Sakai Tadakatsu. At this point in the Edo period the area was mainly a samurai quarter with a collection of temples and shrines. In 1791, Zenkoku-ji temple was relocated here, whose lively festival helped turn Kagurazaka into an entertainment district. The addition of a theatre bolstered its hedonistic reputation.

In the Meiji era business owners and government officials replaced high-ranking samurai and the area saw much development. Iidamachi train station opened nearby in 1895, helping to cement the entertainment district as one of Tokyo’s largest. Though still a playground for the elite, shops sprung up along the hill and a night market began. Naturally, these late-night antics attracted interesting characters, including prominent literary figures Ozaki Koyo and Natsume Souseki.

Luckily Kagurazaka was largely spared the destruction of the Great Kanto Earthquake in 1923. Ginza, however, took heavy damage and many of the businesses moved addresses to relatively undamaged Kagurazaka. It was dubbed “Ginza Yamate” (Uptown Ginza). It gradually developed a reputation for being a cultural district, especially for writers, and appeared in the novels of Fumiko Hayashi and Tsuseko Yada. 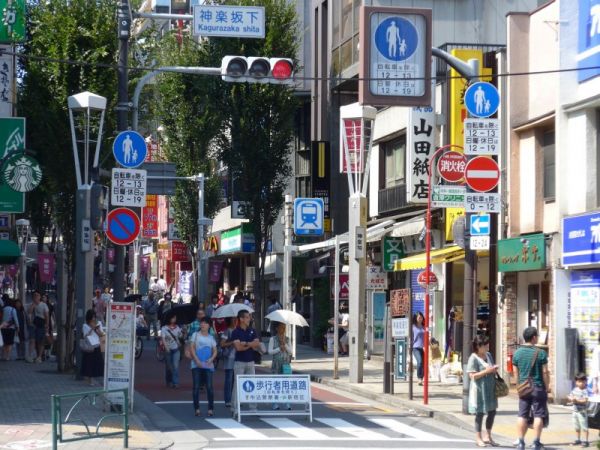 Disaster struck again less than 20 years later. The World War II air raids devastated swathes of Tokyo over the course of a few days, including Kagurazaka. The old, Edo-period buildings were ruined. Post-war reconstruction brought with it large urban development; nearby Shinjuku drew the crowds away from Kagurazaka, but the entertainment business survived, again having a resurgence in the 1950s and ‘60s.

The long and varied history of Kagurazaka has left a mark on its hilly streets. Start a trip here by tracing its Edo origins at the bottom of the hill (Sakashita) where remains of the 17th-century Edo Castle’s Ushigome-mon are located. From here, cross the Ushigome Bridge — retaining its historic style though rebuilt in 1996 — and head uphill into the glow of the Kagurazaka. The district is best visited in early evening, when it’s alive with dinner-goers and strung with lanterns. But don’t let the main street take all the attention: the winding back alleys buzz with excitement and call for exploration. 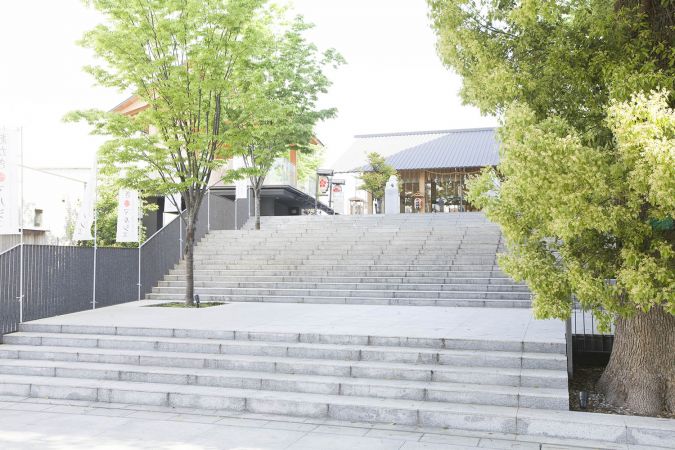 Kagurazaka is still a hanamachi. Currently there are five restaurants and around 25 geisha who reside in these small alleyways. Belonging to the Tokyo Kagurazaka Association, these exclusive dining establishments still feature entertainment with shamisen, dancing and conversation. Edged by classic black lacquered wooden walls, their atmosphere overflows into Kagurazaka’s small cobbled side streets.

One of the most well-known is Hyogo (Arsenal) Yokocho. Home to classy dining spots, this small street takes its name from a Sengoku-period weapons merchant who lived here. Along the stone steps of Atami-Yu Kaidan, also known as “Geisha Alley,” there’s a collection of hidden restaurants and small bars to peer into. Near here is the narrow Kenban Yokocho where the office for geisha and shamisen practice hall are still located. And then there’s Kakurenbo Yokocho, which translates to “Hide-and-Seek Alley” — a maze of passages and dead ends.

In the middle of the hill is the busy Zenkoku-ji temple. Originally built in 1595, the Nichiren Buddhist temple is part of the area’s identity; it was from here that the night market and festivals sprung up and attracted much revelry. At the top of the hill is the quiet sanctuary of Akagi Shrine. This newly refurbished, glass-fronted shrine also incorporates an apartment complex, cafe and shop, but still provides a space for nature and reflection in the middle of the city. From up here, it’s possible to glimpse glittering night views of Tokyo — particularly beautiful on a crisp winter evening — before heading back down into the warrens to find a warm spot for a cosy meal. 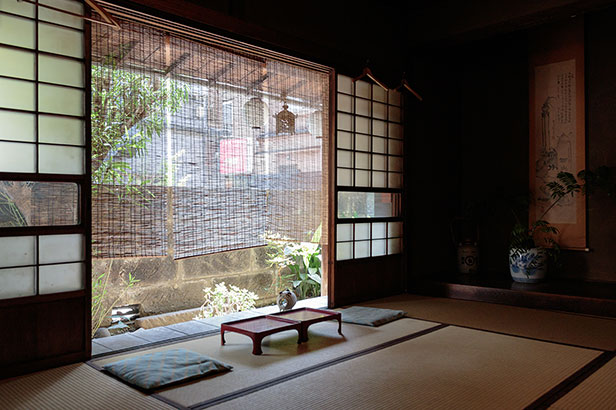 Several well-known ryotei (traditional restaurants) are tucked away in the back streets of Kagurazaka; these exclusive establishments serve refined multi-course kaiseki cuisine and can provide geisha entertainment. Happily the district’s gastronomic flair continues at many affordable eateries. One option is Kagurazaka Kado — a welcoming izakaya located inside a traditional wooden house, serving up a reasonably priced menu of washoku (Japanese cuisine). Those who love Japanese sweets should not miss out on Kinozen, a traditional establishment that serves up classics and seasonal specialties.

There is a long list of hotspots to hit up for European delights: Aux Merveilleux de Fred, an authentic patisserie with a chic cafe; Lugdunum Bouchon Lyonnais is a cosy restaurant cooking up French fare at modest prices; Wine & Cheese Bistro Bonheur boasts a fantastic value lunch menu (cheese fondue, anyone?), plus great cocktails in a lounge bar atmosphere come evening. It may not be Montmartre in Tokyo, but Kagurazaka’s combination of charm and tradition, cuisine and culture, give it a classy je-ne-sais-quoi coziness that lends itself to winter wandering.