“If our band could be described in one simple word, we would have achieved bigger shows because it’s easier to show fans who we are,” Helsinki Lambda Club’s frontman Kaoru Hashimoto admits with a laugh. “We could’ve even saved our manager’s time and effort for branding.”

On the week that Vampire Weekend headlined Fuji Rock Festival, Hashimoto tells Metropolis about his love of the renowned New York band at their label’s office in Shimokitazawa. “We’re going to play for the pre-party on Thursday and watch their performance the following day. I’m so hyped,” he beams.

Hashimoto’s respect for his favorite American band is unabashed, even in Helsinki Lambda Club’s music. “Mitsubishi Macchiato,” a song from their 2020 album Eleven plus two / Twelve plus one, was named after a potential album title that Vampire Weekend had in mind for their fourth album Father Of The Bride. The song tells a fictional story of a boy and girl going on a date to see their mutually favorite band, Vampire Weekend. In this song, Hashimoto’s love was finally conveyed by the band. 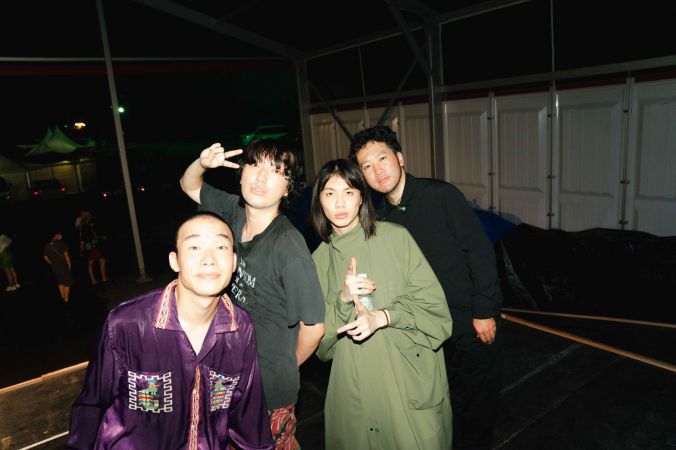 So, is Helsinki Lambda Club just another Japanese band copying their favorite western music? No. They know that there is a lot left to say as Japanese artists today. And so far, they’ve managed to achieve that, having released five studio albums since the band formed in 2013. One example is “Shrimp Salad Sandwich,” another track from their aforementioned album which addresses the political scandal of a former prime minister’s cherry blossom party. “It felt right to do at the time because it couldn’t be dismissed,” Hashimoto recalls. “Whether it’s just a catchy indie song to dance to or a gateway to dive into what’s going on in this country, I think it’s good to have multiple ways for fans to enjoy.”

And this July, the band released a new mini album, Hello, my darkness. On this album, they attempted to blend everything: virtue, vice, beauty, ugliness, wealth, and poverty. Where Japanese society demands order, the band finds beauty in chaos.

Ahead of their upcoming September tour, Metropolis sat down with Kaoru Hashimoto to talk about their new album, his current gripes and his philosophy toward music. 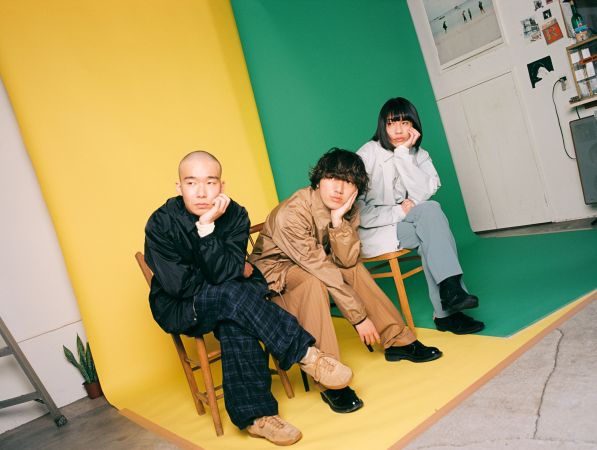 Metropolis: Could you tell us the theme for this album Hello, my darkness?

Kaoru Hashimoto: The previous album was full-length and touched on several different themes in the one album. Instead, we wanted to focus on only a few topics to make more simple stuff this time.

There’s always this feeling in me that music is not about singing what’s normal or right all the time. Death, for example, it’s heartbreaking if someone you loved passes away. But does mourning have to be the only reaction to grief? I feel a sense of discomfort about being expected to behave in certain ways in certain circumstances. Mexico’s Day of the Dead holiday, for example, is a joyful celebration rather than mourning. When I learned about that, it felt like someone finally understood me. Sometimes it feels like enjoying absurd situations or accepting flaws in myself could form the beauty of life and I thought that’s something I would want to sing about.

Similarly, another theme is questioning reality. What we think is real could be an illusion and our dreams might be real life. Who knows? This idea has been with me for a long time but I thought it’d be a good fit for this album. In any case, the themes are very different from the last album, so no wonder fans struggle to understand us [Laughs].

M : Two songs from the album are about donuts. Any reasons for this?

Kaoru Hashimoto: “I’m as real as a donut” is actually a quote from Quentin Tarantino’s movie Once Upon a Time in Hollywood. I really liked the movie and the scene particularly stood out to me. The lyrics of the song don’t make a lot of sense as I tried automatic writing where written words are produced without me consciously writing. However, I like how it turned out and I can understand the lyrics differently every time I sing. There is no right or wrong.

I’ve also known about the philosophical implications of holes in doughnuts, which is “Is a hole a real thing, or just a place where something isn’t.” The concept is fascinating to me and I thought this would relate to the theme of the album. 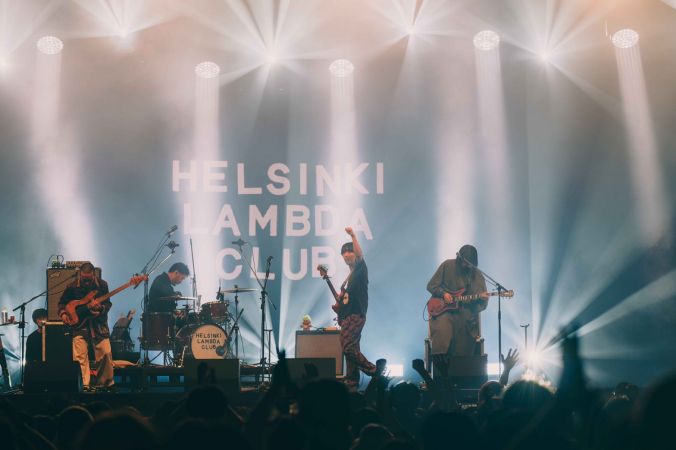 M: Regarding “Mystery Train,” when Metropolis spoke to rapper Wez Atlas, he said one of his missions is to promote subgenres of hip hop, rather than being a part of the huge trap hip hop culture in Japan. The collaboration of an indie rock band and a rapper came as a surprise and has made way for further interesting collaborations in the Japanese music scene. How did this come to happen?

KH: I’m glad our collaboration has been received that way. We were fans of Wez Atlas and wanted to work with him one day. He’s young, talented and even knows how to present himself on stage.

While his own lyrics are mainly English, he switches Japanese and English a lot for “Mystery Train,” which I think is a very smart approach in the current scene. More and more artists like him are joining the scene lately. Although we’re not J-POP artists churning out love songs, I hope to see songs like ours written more and consumed in the mainstream scene. Even if it’s not an easy format that everyone can understand, the crossover should have meaning. It feels like a lot of media is becoming increasingly predictable or easy to understand. Everyone‘s looking for the answer even before reflecting on their own thoughts. And in the end, there’s no room left for anyone to think about how they actually feel.

Rappers collaborating with each other or a rock band being invited to a music festival organized by another rock band. It’s all organized and predictable. “Mystery Train” is a counter to that movement and I hope each fan feels something and that feeling only belongs to you.

M: Khaosan road is a popular place in Thailand. How did you come to sing about the place?

KH: Khaosan road is a mecca for backpackers from all over the world. I’ve been there a few times and I really loved the city’s vibrant atmosphere. Also, it’s interesting to see the variety of lifestyles there. Rich tourists, young backpackers, or local people trying to rip you off, everyone is different. But it feels like there’s no such thing as hierarchy, I’ve never felt negative energy there. They are all living their life. I always walk around there feeling amazed at how things are and end up almost being ripped off [Laughs]. However, It seems like a beautiful thing to me. That’s where everyone’s life is. I couldn’t just be angry.

M: I heard you read a lot of books. Have you read anything recently?

KH: I used to read a lot of books but I’m not sure if I still read enough to say I love reading. Netflix is taking over my time at home and Donald Glover’s Atlanta is my current favorite. There are many angles to see this series and it’s always an eye-opening experience to me as I’m neither a white nor a black person. That makes me feel like I’m an outsider or minority. Not being a part of it could be my strength I guess. By observing things from a distance, I might be able to come up with new ideas that no one else could see yet. Atlanta is just an example but this could be applied to many other things in this world. Helsinki Lambda Club is not only copying the bands we love. By adding a twist as Japanese artists, we believe we can build our own style. 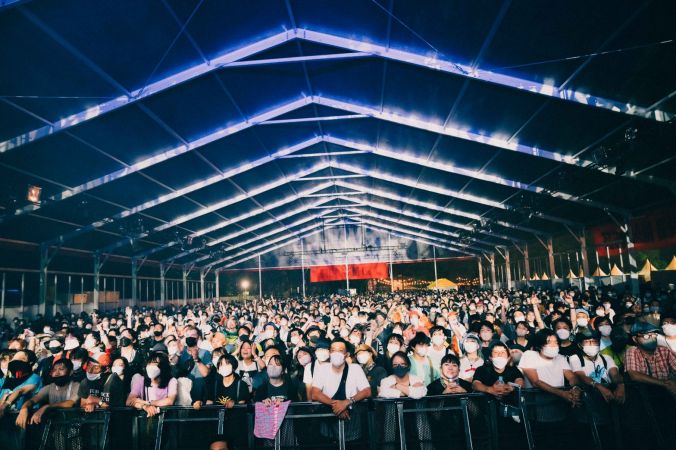 M: Any plans for the rest of the year?

KH: As I’m getting into my thirties, I genuinely hope the world becomes a better place for younger people. But sadly the world is still shitty. Personally, I think laughing away some of those things could be a way to deal with daily problems. That’s probably why I’m actively consuming various cultures and things as a way to develop new approaches.

Other than that, we already have ideas for new songs even though we just released an album. And the tour is starting soon. We’re stoked to perform for our fans across the country!