Recently, talk in the jazz world has been of a hopeful renaissance. Interest is up, a new generation is taking its place, and the war between jazz classicists and the avant-garde appears to have drawn to a truce. And if ever there were to be a face for the new, globalized vision of jazz, pint-sized Japanese piano virtuoso Hiromi would be a prime candidate.

For the Hamamatsu native, it’s perfectly natural for a century-old African-American music form to take up residence in the Far East.

“I always get asked why jazz is so big in Japan,” she says from Naples, Italy, where she’s on tour, a hint of frustration showing through the line. “I think it’s important everywhere. It’s a form of music that can reach so many different kinds of people.”

What is it about jazz that allows it to transcend borders? “Maybe it’s the improvisational part,” Hiromi muses. “Even the people who are playing don’t know what will happen on a given day. And most listeners enjoy the mystery tour. No one knows where it will end.”

A child prodigy who attended the renowned Berklee College of Music in Boston, Hiromi signed her first record deal in 2003—even before graduating. Her explosive virtuosity and ability to meld tradition with modernity—along with some creative hairstyles—have made her a pillar of the supper club and festival circuit.

“I never felt stage fright in my life,” Hiromi laughs. “I was always excited and loved performing. Even in my house, I practiced to perform and composed to perform. When I was little, I used to carry a flashlight to my piano room and would turn off all the lights so it looked like a concert hall. And I would call my mom and bow, and make a speech: ‘No flash photography, no video recording of any kind.’” 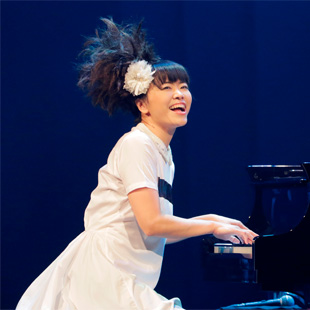 Hiromi is a banshee at the piano, commanding the respect of musicians twice her age—and weight. Her upcoming set at the flashy Tokyo Jazz Festival will again show off her trio project with two veterans, bassist Anthony Jackson and drummer Simon Philips. The unit has just released its fourth album, Spark.

“I wanted to write something about the idea that everything starts with a single spark, and the journey begins from there,” Hiromi explains. “The other songs evolved in relation to the title track. You get into a trance, and feel like you want to be taken away to a wonderland. Each song called up the next.”

Perhaps it’s her preternatural ability to channel her muse with such ease that’s made Hiromi a hit worldwide. “I always feel like each show is a once-in-a-lifetime experience,” she observes. “Even if I play the same songs, it can differ like night and day. I really enjoy the ride. It’s something I can’t control and I like to go with the flow. It’s like life. You don’t know what you’ll encounter every day. You always have to improvise. It’s an amazing experience to spend a precious hour or two together. I feel like I’m the captain of a boat and I have to give my passengers a great musical adventure.”

While Hiromi is serene about the bond she forms with her live audience, she’s more circumspect about the gulf that streaming has opened up between performers and musicians. “Streaming is a great discovery method, but when music for free happens out of greed, that’s when it hurts,” she says. “All these years music was only supported by respect from musicians and audience for each other. When respect is ruined, that’s the end of the music business.”

One place where respect for music seems to remain is Hiromi’s home country. “Musicians love coming to Japan. They all say Japan has the best hospitality,” she notes in a comment that also points to a cause for jazz’s popularity here. “That may also be why the greatest musicians want to come to Japan. And then they inspire the audience, and that helps to expand the fanbase for jazz in a virtuous circle.”