For many, mainly British, teenagers – their first foray into the world of alcohol is through cider. Strongbow, Merrydown, Old English – are names which many adults now shrink at the mention of due to outrageous mishaps in their youth (this writer included). An alcoholic drink traditionally made from apples (and more recently other fruits such as pears and strawberries) cider is extremely popular in European countries such as Britain, France and Spain. To most people in Japan, however, cider is a transparent soft drink very much in the same vein as American Cream Soda or Sprite. That’s where the confusion comes into play. Alcoholic cider is almost unknown in Japan and is usually only to be found in Irish or British pubs with the main contenders being brands like Magners, Strongbow or Addlestones.

Japanese brewers Kirin and Nikka (Asahi) have even introduced their own labels – Hard Cidre, which, while not perfect, are both a pleasant enough replacement for the real thing. The fact that these two brands have been making a kind of cider is healthy sign that cider is gaining traction in the far east – a point not lost on Lee Reeve – an avid cider fan and founder and editor of inCiderJapan – the nation’s first bilingual publication focusing on the fruity goodness of cider. Reeve, a long term expat and former writer and editor with Japan Beer Times sat down with Metropolis to talk cider, his magazine and the future of the alcoholic apple drink.

Interview with Lee Reeve of inCiderJapan 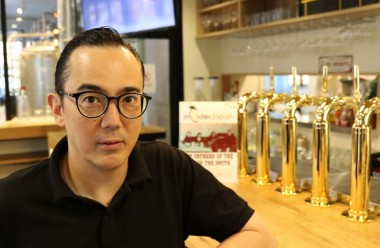 Metropolis: Tell me a bit about your background?
Lee Reeve: My first alcoholic drink was cider. That’s what got me started. But after I left the UK and got older I basically forgot about it. I did Babycham back in the day and Strongbow and then it filtered out my stream of consciousness and didn’t really think about it. It wasn’t until I got to Japan and the craft beer “thing” started that I found myself thinking about cider again.

I heard people murmuring about craft beer in Japan in 2007/8, and at the same time I ran into a guy who was about to start a craft beer magazine (Ry Beville) and he launched the magazine (Japan Beer Times). I came on later as a writer and eventually as editor. During that time we were helping out with events and spreading the word, it was a few years doing that and watching the industry grow. At that time I could count less than five places that had craft beer. Suddenly it was ten and then twenty and during those years the magazine grew from 10 pages to 24 – now it’s over 80.

That experience taught me that changing the nature of a particular drinking culture could be done. Eventually the saturation of craft beer popularity just got to the point that I said – that’s it. It’s on its own now.

M: Does anyone know how many craft beer bars there are in Tokyo now?
LR: I certainly don’t. I remember when people were talking about 20% yearly growth. Numbers like two new bars a day or week. It got a bit mental. So I left but all the while wondering if cider could have a similar success. I wasn’t really thinking about it though until I saw the resurgence of cider in the UK. And I thought that was interesting. Then in America people were talking about cider again. The revival was definitely down to what was happening in the UK with all the new cider pubs in places like London. This is about 2013/14, and that’s when I got wind that there were places in Nagano also making cider. So I visited and starting locating these ciders. At that time they weren’t really the ciders I was used to. To be honest, I wasn’t that inspired.

But then I reminded myself that what did it for Japanese craft beer was when the brewers started getting educated from people with more experience. In the beginning they were doing everything on their own but the beers weren’t that great and people complained. Then a few of them went off to America, England and Germany and their beers got better. The point is I thought that if I could somehow accelerate that same learning curve in Japan for cider, then maybe something great could come out of it. So I started writing about cider and searching out cider people; whatever I could, but it was all for nothing in the beginning.

Finally one day I was sitting down with a cider importer friend and basically counting how many ciders you could get in Japan – and the realisation was that there were plenty but absolutely no vehicle for anybody to know about them unless you knew already. Then it dawned on me that now was the right time, so I published the first edition of inCiderJapan in December of last year. The idea for the company actually came in 2015, and I finally incorporated in January of this year. The magazine is quarterly for now so the next one is due out in August. The goal is to get it bi-monthly within two years. It started out slow but the interest is there. Now I have cider people contacting me from the States, the UK, and Europe – everywhere – showing me that my timing might not be too bad.

M: Any interest from mainstream press in Japan about cider?
LR: There have been a few articles in Japanese magazines. And one or two books (one translated, the other new) published. There was one piece, which I was quite against when I first read it but now I quite like, about cocktail bars and how they were introducing Japanese ciders. I thought was just rubbish at first but then I realised cider needs any and all the entries it can get. And who knows? Maybe for Japanese that’s the entry.

But inCiderJapan is a bilingual magazine so we have both a Japanese and English speaking audience. And that’s important, necessary. And the timing feels good.

M: How many Japanese cider brewers are there?
LR: It’s a confusing number. I can think of at least 15 but there’s definitely more. What makes it confusing is that a lot of cider makers are actually apple growers that work in tandem with a local winery. So the actual brewing is done by less people than there are cider makers. So there are probably more than double that number of cider makers – in total.

M: How about cider bars?
LR: Not too many – yet – but there are two well-known dedicated ones. There’s one in Tokyo in Kanda (Eclipse first) and one in Yokohama (Full Monty). The one in Kanda focuses primarily on Spanish and Japanese ciders. In Yokohama they have a wide range of ciders from the UK and America. Kanda is mostly bottles but Yokohama has ciders on draft as well.

M: How hard is to import cider into Japan.
LR: It can be more difficult than craft beer at times, sometimes quite tough. Mostly it’s customs who haven’t had any experience of it so they don’t know what it is. With craft beer, it comes in, gets tested and takes a week, two weeks. But with cider it often gets stuck in customs for months with very little explanation why. That’s something we hope will change with the change in beer and alcohol laws.

M: Tell me more about your magazine and thoughts on cider in Japan.
LR: The mission of the magazine is to inform, educate and promote. Education really is key because the simple truth is there are still a lot of people who just don’t know what cider is.

Cider has so much potential. You’ve got a market of younger people who could be interested in drinking it because the older generation doesn’t. You have women, the health angle, the vegetarian aspect (apples), and it’s gluten-free too. You even have craft beer drinkers who want something different – something new.

When I started the company I did so knowing a magazine alone couldn’t effect all the change needed. So we also do events, promotion, and consultation. We’ll soon have a cider cocktail pop-up bar, for example, which will be a monthly event. We have another event with an Italian/Japanese fusion restaurant who is interested in doing cider pairings every other month. One of the keys to the success of cider is to create regular events where people don’t have to commit fully to experience the wonders of cider – and I’m all about giving them that experience.

I’m also about to start importing my own ciders. We’re in the process of getting the licenses and I’m already in negotiations with several companies about bringing their ciders into Japan. It’s an exciting time for cider, and I can’t wait to make Japan excited for it.