The only bilingual improv comedy group in the Kanto region, The Pirates of Tokyo Bay are a powerhouse of fast-paced improvised games and scenes alternating between the completely outrageous and the sincerely heartwarming. Audience members are treated to two laughter-packed hours every month at What the Dickens in Ebisu. 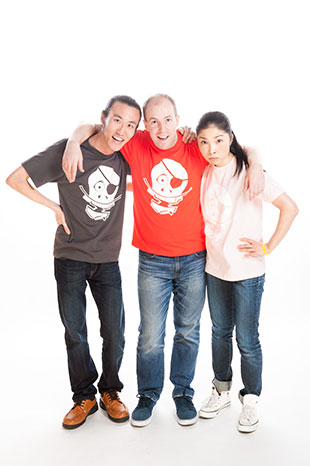 Mike Staffa and his crew
(Photo courtesy of POTB)

“My greatest motivation is really to see the audience smile,” says Mike Staffa, the Pirates captain who sailed the group north from Osaka four years ago. “I would like our audience members to come away from our shows ‘getting it’—meaning they will get the comedy and humor, regardless of the language used.”

The Pirates caters to both the Japanese- and English-speaking crowds, alternating between languages onstage, allowing them to connect with a wide range of audiences.

“We had a very busy 2014 with overseas tours to Singapore, Hong Kong and New York City, and next year is shaping up to be just as busy,” Staffa tells Metropolis.

Not only do the Pirates have a monthly bilingual comedy show, they’ll also restart their all-English show in Shibuya in January 2015 to alternate with their bimonthly all-Japanese shows.

“We also have plans for another round of improv shows set between our two Pirates groups, ‘Osaka vs. Tokyo,’ as well as expanding our corporate workshop offerings,” Staffa says.

The Pirates will be celebrating their fourth anniversary in a rare Roppongi performance this month.