On a characteristically sunny September morning in Hawaii, a striking 18-year-old girl strolled up to a small mansion overlooking the Pacific Ocean from its floor-to-ceiling windows and pool. On millions of sofas around the world, laptops planted on their knees, Netflix viewers watched as she wandered around the empty house, muttered to herself “私は,一番目?” (“Am I the first one?”) and eventually sat down at a six-person dining table and waited. As the other five houseguests trickled in and the action progressed at a bewilderingly slow pace, many of the laptop viewers flipped on English subtitles and started drawing invisible lines of interest or conflict between the cast of characters and mapping out practical roles for each of the three boys and girls. Lauren Tsai, simply but stylishly dressed, the youngest and prettiest of the girls and an aspiring model, seemed like the easiest one to place.

A year and a half later, in a high-ceilinged café in downtown Tokyo, Christmas music blaring and plates and cutlery jingling as the wait staff prepares to open in an hour, Tsai confesses, “I’m shy. I’m awkward. I’ll never be popular. I’m only just going to be behind the scenes doing art. I told myself this story my entire life.” This wasn’t the first or only time she amazed and confounded in an interview that wound through the topics of Japanese anime, high school trauma, Harry Potter, Jim Carrey and the possibility of an afterlife, to name a few. 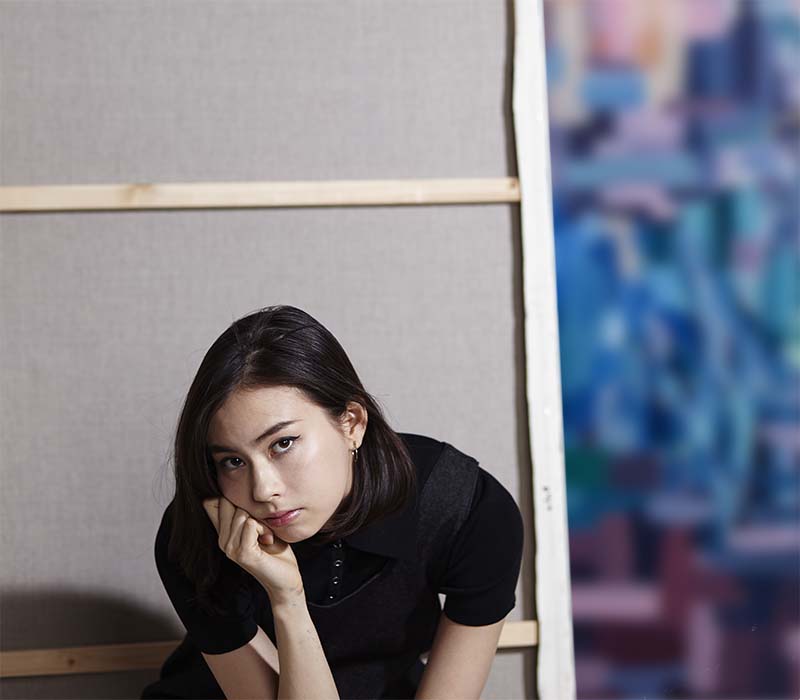 Tsai intently evades a particular definition and, of all the different hats she wears, would probably be keenest to eschew the title “reality TV show star.” It was her stint on Netflix’s Japanese reality show Terrace House: Aloha State, however, that propelled her into global focus over the past year. The unexpected international popularity of the show has fostered a host of articles from Buzzfeed to The New York Times Magazine, all with the same general drift to their headlines: “Netflix’s ‘Terrace House’ is Japan’s ‘Anti-Bachelor,’” “Netflix’s Terrace House Finds Meaning in Mundane Human Interactions” and “How a Japanese Reality Show About Nothing Became a Global Hit.”

At one point, Tsai provides her own similar description, while reflecting on the show’s success: “It became something that people were actually talking about like ‘Hey did you see that weird, really boring Japanese reality show that’s actually not kind of boring if you watch it?’ ” 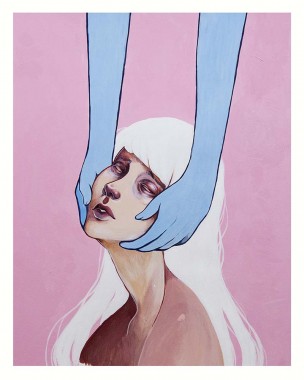 Probably one of the most memorable story arcs is the shy, endearing, brilliantly talented ukulele player Yusuke who falls in love with Tsai and asks her to a movie. In one episode, we follow Yusuke to his haircut appointment the day before, where he excitedly confesses to his barber that he’s preparing for his very first date and, in return, receives some wise advice about hand-holding. Then we join him back in the boy’s bunk-bed room at the house where he lays out two differently-colored shirts (he “got confused in the store” and couldn’t decide which one to buy) and new boots and asks for his roommates’ fashion input (which, to their credit, the other boys happily give). When Tsai declines to get dinner with Yusuke following their movie date, citing a prior family commitment, Yusuke upholds the dinner reservation he made in secret and pathetically consumes his catfish dinner alone. The scene absolutely wrenches at your heartstrings.

The real and yet unreal nature of the show opened its stars to a ton of exposure and criticism. To this day, the comments sections of interviews with Tsai invariably open with something like: “why u no give ukulele boy a chance?” (Howard, Hyperbae.com).

But, showing a maturity far beyond her 19 years, the up-and-coming “it girl” doesn’t mention the backlash and criticism much, seeming to take it in stride. Instead, she focuses on all of the love, fandom and encouragement that she’s received since the show’s airing, crediting nearly everything she’s been able to do since then to her exposure on Terrace House and its projection of celebritydom. And yet, she must be the perfect example of someone who contradicts their celebrity image.

Born in Massachusetts, Tsai moved with her family to Hawaii when she was seven. Although she describes the people in Hawaii as warm and friendly, she admits that she didn’t feel like she fit in with the people around her, and instead chose to retreat to the safety and seclusion of the indoors to draw.

“I was really awkward in middle school, honestly. I had these black braces, my hair was long and …I shower everyday but my hair looks greasy everyday for some reason … And I wore the same black jacket every day.” She goes on to explain, “It was out of fear. I was terrified of the judgment of my peers. I thought if I wore a different-colored shirt, like if I wore a pink shirt, people would notice. And honestly, no one cares, everyone’s thinking about themselves — it’s middle school.” At this point in her life, the only thing she felt confident in was drawing. 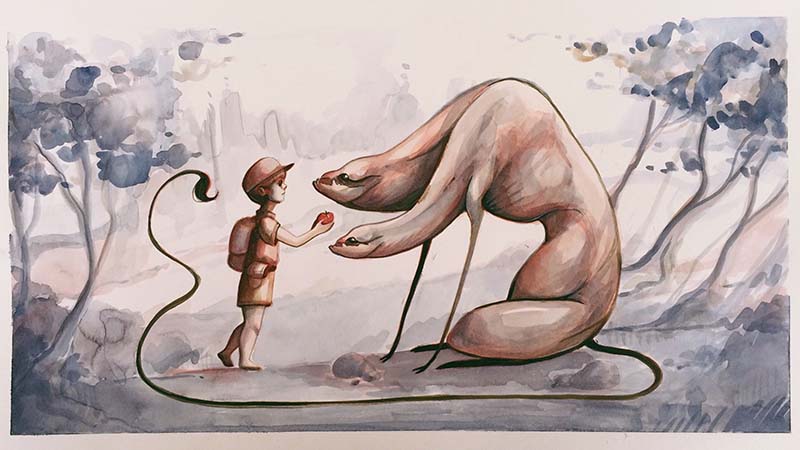 “But a personal-satisfaction confidence,” she clarifies. “I didn’t want to show my art to anyone because people thought it was weird. I loved to draw like weird, gorey wolves and dragons and anime-type stuff, which is super nerdy…And nowadays I think that’s great. If I saw a kid doing that I’d think that was cool because it shows they’re passionate about something.”

But it’s really only in the last couple years that she gained this perspective. Feeling increasingly isolated from the people around her, after middle school she decided to give up drawing entirely.

“I didn’t want to be that weird kid drawing anymore. I wanted to have friends, I wanted to feel connected to people.”

With that purpose in mind, she returned to her home state to attend boarding school her freshman year of high school. More than any other period of her life, this is a time that Tsai is reluctant to talk about, describing it enigmatically as a year of discovery, great things and hard things, but concluding with this: “That pain had to happen. I think all the pain and all the happiness we experience in life, it’s all connected.”

Back in Hawaii the following year and attending a small Buddhist high school, she seized on an opportunity to do a six-week exchange program in Hiroshima. Today, she’s been living in Japan continually for almost a year, and in many ways she’s like a young girl in that first, exciting, honeymoon phase of love: her face lights up when she talks about Japan. That exchange program sophomore year was when this love affair began in earnest.

“That’s where I really got immersed in the culture. There was something so strangely welcoming about the country … I don’t know, I just fell in love with everything.” And another passion came out of this six-week exchange, one especially unexpected for a shy, slightly awkward teenage girl: modelling. 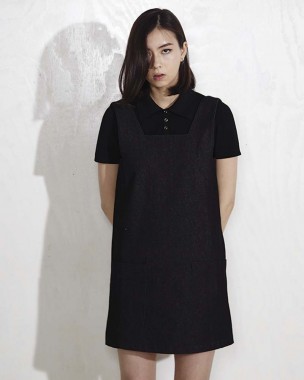 “I was always terrified of expressing myself through the way I looked. I always thought I was never going to model … I wasn’t necessarily that tall, and I didn’t have that like super alien, high-fashion face or super sexy look to me.” But riding on the encouragement of the classmates at her all-girls Hiroshima high school, she took some shots on her laptop’s Photobooth and applied to agencies in Japan. One responded and took her on. She would spend the next three summers in Tokyo trying to make it as a model in between years at her Hawaiian Buddhist high school.

More than anything else, Tsai can be seen as a creator. She speaks about modelling with a surprising degree of creative passion.

“I remember when I booked my first job. It was this really stupid catalog job where I was modelling for a kotatsu …. I was the model, but it could have been anyone. I was just sitting there, and I had to wear this vest and just turn my head and smile, like this — ” sweeping her face away from the tape recorder. “I remember trying so hard to get that smile perfect … and I felt so much energy … for the first time, I was the subject.”

Modelling gave her a new-found confidence, which helped during the terrifying situations that life threw at her, like standing in a bikini in front of a whole crowd of casting agents. But it also elicited a love of expression that she had been trying to smother since middle school.

At the beginning of her senior year of high school, her long-dormant passion for drawing came back suddenly and forcefully. “It hit me and I realized what I want to do has never changed. And I realized that it’s never going to change. I want to be an artist. I want to create things.”

In a feverish month, she put together a portfolio and sent it off to a bunch of art schools alongside applicants who had probably been carefully curating their college admission portfolios since freshman year. To her great surprise, every last one offered her a coveted space at their schools for the following year. “That’s when I realized, maybe I can draw. Maybe I’m actually not that bad at this.”

But looking over her various acceptance letters, something felt off again.

“I had been doing modelling in Japan and I didn’t want to give that up … I couldn’t say it’s a ‘dream’ necessarily, the way that art is for me … but it felt like there was a whole side of me out there to be found that I wouldn’t be able to find if I went to college and just dedicated myself to studying art completely.” She deferred, but, in truth, she knew it was really a rejection.

Back in Tokyo the summer after graduation and contemplating her choices, the ones behind her and the many more lying ahead, she came across an intriguing ad on Facebook one day, looking for participants in some unnamed Japanese reality show.

“I’m grateful for the way things have turned out,” she reflects. “I think everything we do matters. Things happen for a reason.” 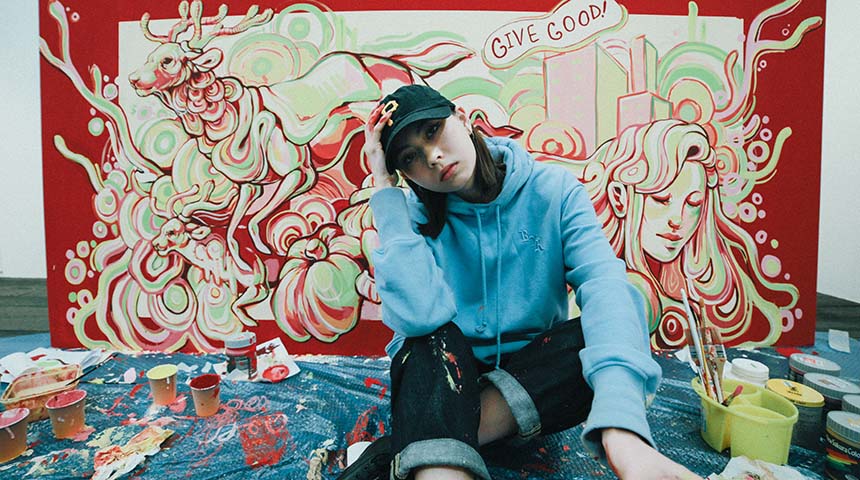 At 19 years old, just coming off a holiday art contract with Starbucks and inundated with more modelling requests than she has the time or energy to accept, it’s tempting to dismiss Tsai’s youthful “all things happen for a reason” philosophy as inductive reasoning — built on her own very exceptional career trajectory that was driven by equal parts talent and random, remarkable luck. But she doesn’t adopt this mantra because she finds it particularly profound or original or even as a way to defend her good fortune. It’s because she’s a storyteller.

Whether it’s drawing, painting, modelling, animating, journalling or (most recently) acting, telling stories is at the heart of everything she does.

“I believe in the power of entertainment, I really do. It can take you to places, make you feel things, make you become people. It lets you dream. If I could contribute to that world, that’s the life that I want to have. It’s a place of no limits. Creation can be anything we want it to be.”

Peek inside the Lauren Tsai sketchbook: 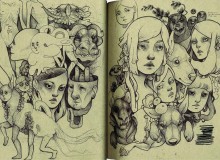 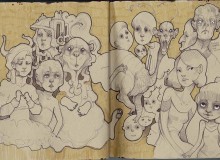 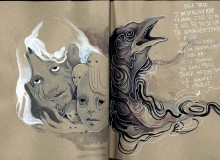 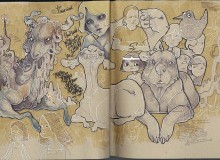 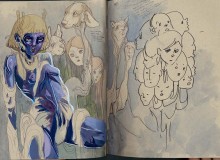 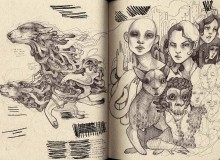 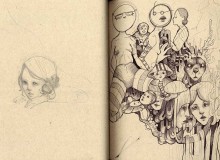 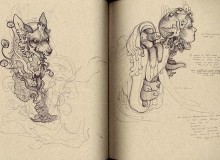 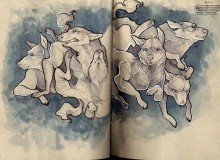 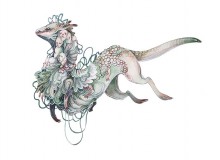 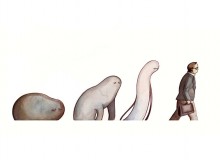 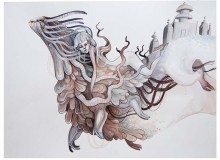 To a better place