Approximately 1550 km south of cold Tokyo, Okinawa is enjoying a relatively warm winter and is getting ready for its annual pink shower! Right after the New Year’s gatherings and other shinnenkai (beginning-of-year parties), Okinawans are ready for a celebration of Mother Nature called “Sakura matsuri.”

Blessed with a subtropical climate that attracts many visitors and new settlers, Okinawa is home to the first blossoms in Japan—a premise of the many festivals that will pave the seasons in the prefecture. It’s the perfect occasion for locals and visitors to enjoy walks in moss-green mountains and parks beautifully colored with bright pink touches.

In many parts of mainland Japan, cherry blossoms coincide with the beginning of the scholastic and fiscal years of April. Following a tradition of admiring ume (plum) tree blossoms that started in the eighth century, which grew into flower-viewing hanami parties organized by Shogun Hideyoshi Toyotomi, Japanese today await the cherry blossom season as a time to enjoy gathering with friends and colleagues. Beneath the branches of cherry trees, parties filled with seasonal foods and drinks dot the landscape as the somei-yoshino cherry tree flowers bloom in white or pale pink petals for the pleasure of all.

Down in the Ryukyu archipelago, the Okinawan sakura with its marvelous pink color stands as a dream marriage between its mainland cherry cousin and the deigo (Erythrina variegata), the crimson-colored official flower of Okinawan prefecture made famous by the popular song by The Boom’s “Shima Uta.”

Horticulturally speaking, the Okinawan sakura is a different variety from the somei-yoshino and other varieties found on mainland Japan. Called hikan zakura, or kanhi zakura, the Okinawan cherry is a variety primarily originating in Taiwan and southern China, thus its common name “Taiwan cherry.” With a bellflower shape, the Okinawa sakura blooms facing downward in tones of vermillion all the way to pale pink.

Another major difference between the cherry blossoms of Okinawa and the mainland is that the blooming stream occurs not south to north as is commonly announced through sakura zensen, literally “Cherry blossom front” forecasts by the Japan Meteorological Agency, but north to south. As the cold triggers the blossoms, the pink blooms are first observed in the northern Motobu Peninsula in mid-January and slowly descend along the main island of Okinawa to reach Okinawa City and then Naha City and the southern regions one or two weeks later.

While Okinawan people are not shy when it comes to celebrating, few parties are held under cherry blossoms. This can be explained simply by the prefecture’s limited public transport and the locations of the festivals. Having to drive to the sites with your own car doesn’t encourage the hanami parties that are so popular on the mainland, as driving and drinking are out of the question. As in the case of the most famous festival, cherry trees on Mt. Yaedake line a winding road up the mountainside; therefore a picnic wouldn’t be wise. This means sakura matsuri are true celebrations of nature rather than outdoor feasts. Cherry viewing in Okinawa is all about being there for a walk or a drive in pink-splattered nature, taking photos of the many variations offered to public eyes; a simple yet beautiful communion with nature. People will have plenty of chances to party year round.

Speaking of parties, Okinawa is so proud to be the first region of Japan to see cherry blossoms each year that the major local beer company, Orion, celebrates by putting its “Ichiban-Sakura” brand on sale as soon as November. Designed with crimson-pink cherry flowers, bottles and cans of the 100% malt beer color tables as nicely as cherry trees decorate the surroundings. Another original program related to the cherry blossoms is the election of Miss Sakura. Every year, the Nago Sakura Queen election is organized to decide who will represent the city for the coming year. The 41st selection of Nago Sakura Queen took place on November 29, 2014 and, from 11 participants, Kana Higa, Narumi Unten and Reiran Kudaka became Queens of Nago for one year.

Known for its warm weather and warm-hearted people, Okinawa for many symbolizes summer, diving and marine fun. But in January and February, it’s a warm and beautiful destination embellished further by cherry blossoms. If you have a weekend to spare, a journey to the Ryukyu Islands during the pink blooming season will show you another side of Okinawa that will definitely charm your heart and, most likely, taint it in bright pink!

A total of five festivals from north to south of Okinawa’s main island are held between mid-January to mid-February. And while the festivals are usually held on weekends, the pretty sakura pinks are always waiting during the season. 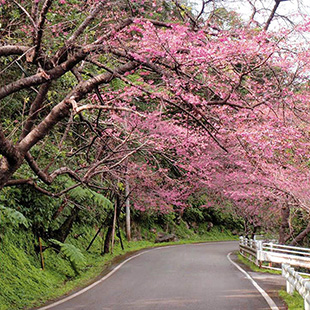 Mount Yaedake in northern Motobu Town is the second highest mountain on mainland Okinawa at 453.4m and home to one of the most famous spots to enjoy cherry blossom. With 7,000 trees, its sakura festival is one of the most praised events for nature and sakura aficionados. From the entrance on route 84 to the top, trees line the mountainside for approximately 4 km, allowing visitors to climb on foot or by car to the summit. Every weekend during the festival there are  stage performances and food stalls that give the area a true festival mood. Home to a magnificent wildness, the region also houses many cafés and art galleries where people can relax before the drive home. 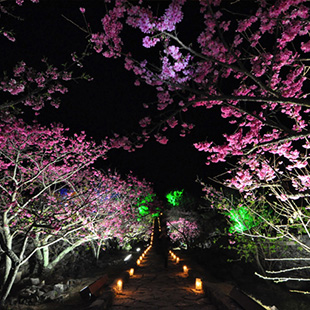 The majesty of a World Heritage site painted in pink. With a history dating back to the 13th century, Nakijin Gusuku (castle in Okinawan language) is on its own a site not to miss when touring Okinawa. And when January comes the castle remains color themselves in pink. Unique to this gusuku are the 753 stairs that lead to the castle’s main ward. There, before WWII, locals planted cherry trees on both sides of the stone path and this has become one of the trademarks of the castle. During the festival season, the castle site is lit from 6-9pm, offering a breathtaking view of the rosy fortress that’s not to be missed. 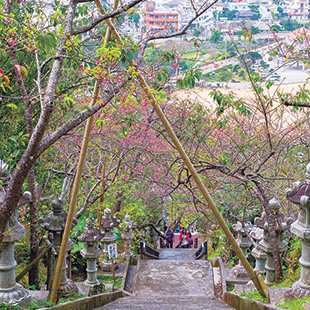 With food stalls and stage performances, this festival is typical of the many Okinawa hosts throughout the year. While the entire area boasts some 20,000 cherry trees, the leading attraction is the approximately 2km-long approach to Nangusuku (Nago Castle), which itself dates back to the 14th century. The dream promenade wrapped in brilliant pink leads to the summit and opens to a fantastic view of the emerald green East China Sea. 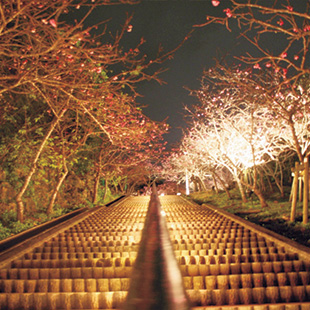 Located on the southeast coast of mainland Okinawa, Yaese Town organizes this event in Yaese Park, filled with approximately 500 cherry trees. Over the years the area has become famous for cherry blossom viewing. On this festive day, displays of local products and performing arts stages are organized together with the unique Winter Giant Tug of War. Light-ups are scheduled from January 23 to the actual festival day, 6-9pm. 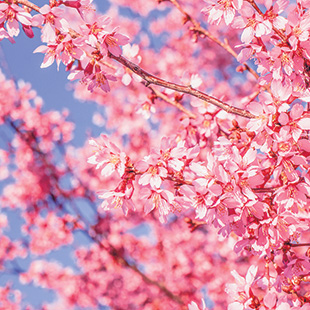 Once a year, the 400+ cherry trees of Yogi Park in Naha City welcome this horticulture and entertainment event. During the festival, gardening consultation and sales, popular song stages and other performing arts can be enjoyed by all generations under the pretty pink flowers.

Other sakura festivals throughout Okinawa prefecture

Depending on the year, timing of the sakura blooming season may change. We suggest you plan in advance by contacting the respective organizers in order not to miss the feast! For tourist information in English about Okinawa and its various many festivals, contact the “Multilingual Call Center” at 0570-077201 or 098-851-7286.  From outside Japan call: +81-98-851-7286 between 9am and 9pm (up to March 31, 2015).