I always wanted to be a chef. I knew that, through food, I wanted to express and share feelings, but I never thought that would be through tacos. I was studying culinary arts and working in a Michelin-starred restaurant in Canada in hopes to become a French culinary expert when I met my now-wife. After being together for a long time we decided to move to Mexico and live there, however, Mexico is not the easiest place to live if you’re not from there and my wife was having trouble adapting to this chaotic environment, which ultimately led to us moving to Tokyo.

Coming to Japan in itself was a challenge, there are so many new obstacles that arise, the obvious one, the language barrier, but also the bureaucratic obstacles, and adapting to a different friendship culture. In Mexico, making friends is one of the easiest things to do, people from the get-go will talk to each other as if they’ve known each other for ages, but in Japan people tend to take it a little slower, and actually get to know each other before opening up. At first, I was having a hard time adjusting to this type of environment but as I got the hang of it and understood it well, I came to appreciate this new way of thinking. 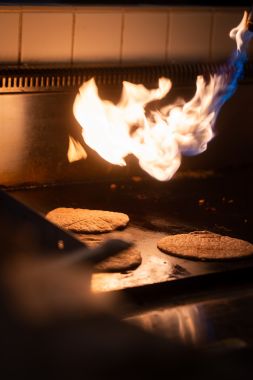 When making friends in Japan, the first thing people ask you is “Where are you from?” That question is usually followed by “Where is the best restaurant where I can eat authentic Mexican food?” As a chef and as a Mexican, I can’t reply with an “I don’t know,” but I truly didn’t know, so instead of recommending a place I started inviting people over to my house to try Mexican food. It started off as a small thing, and only close friends would come. I would make my Japanese friends help me with the tortillas and they really enjoyed being a part of the culture. Little by little, the “taquizas” or taco gatherings went from once a month to once every two weeks. This was one indicator that maybe I should be making Mexican food. However, the biggest indicator that I had was that my Japanese friends started bringing their friends over without announcing anything, they would show up and tell me that they had to bring them as they really wanted them to try my food. In a culture of so much respect and consideration, bringing someone unannounced made me really happy, and I took it as a sign that I should be focusing on making tacos.

I started investigating where I could source my ingredients, everything seemed too expensive and I really needed hands-on experience in restaurants to learn more about the Mexican culinary world of Japan. I spent the next three years in three different Mexican restaurants where I slowly learned more about importing and exporting and from where I could source my ingredients. 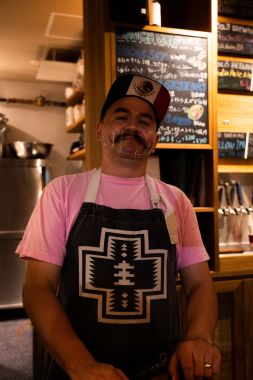 After gaining some contacts and feeling more confident in my abilities, I decided to quit my job at the restaurant and open my own. I began crafting a business plan, however, as time went on I began getting queasy about my personal finances, so I decided to take up a part-time job at The OL, Oslo Brewery. After some time and many conversations, the opportunity to place a taco shop like the ones that exist in Mexico City finally arose.

This became the origin of La Cabina, or The Cabin. La Cabina became the only stable food at OL, and as the news of it spread, so did the community surrounding it.  More and more chefs from around the city came to see what was happening and thus launched La Cabina into popularity. So much so that La Cabina appeared on Netflix’s “The Taco Chronicles.”

After many years of hard work and careful planning, La Cabina and OL fused together to create OL La Cabina, a place where beers and tacos create the perfect marriage. And if you’re not into beer, you can also get a tasty cup of joe from Fuglen roastery.

La Cabina brings traditional Mexican food to Japan without being fusion or by being pretentious. The whole purpose of why La Cabina exists is to have people experience the taste of the cabin carts that serve food all over Mexico. They are inexpensive places that are meant to create a warm, safe environment for everyone and bring people together through great, inexpensive food.

If you were to ask for the chef’s recommendations then I’d definitely have to say the carnitas taco, the al pastor taco and the fish taco.