“Flowers, birds, grasses, and insects each have their own innate spirit. Only after one has actually determined the true nature of this spirit through observation should painting begin.” — Itō Jakuchū 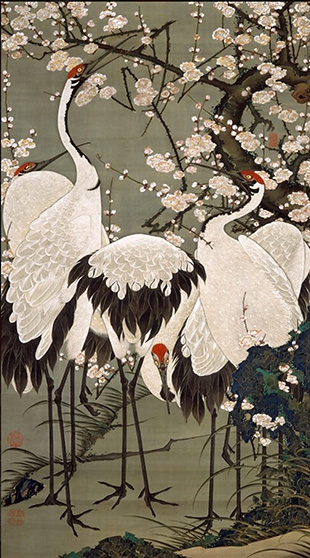 Sublime. Serene. Intense. Impenetrable. Enigmatic. No other words by artists, writers, educators, historians and monks have been more explicit to describe one of Japan’s most prolific painters of the mid-Edo Period: Itō Jakuchū. Best admired for his “The Sakyamuni Triad” (three scroll paintings) and “Pictures of the Colorful Realm of Living Beings” (30 scroll paintings), which he dedicated to Shokoku-ji Temple in Kyoto, Jakuchū embodies the realm of nature, existence and beauty in dreamlike compositions, yet which remind us that they are as real as the spectrum of colors and lines that fill them.

The scroll paintings are exhibited for the first time in Japan at the Tokyo Metropolitan Art Museum in the exhibition The 300th Anniversary of his Birth: Jakuchu, which runs until the 14th of May.

Jakuchū is widely known for his delicate delivery of brushstrokes and color effects, bringing birds, animals, flowers and trees to life. In the scroll “Colorful Realm of Living Beings: Flock of Fowl” (ca. 1761-1765), for example, the group of 12 roosters and one hen are laid out asymmetrically with the careful balance of black, brown, white, and red pigments that do not tire the eyes. As with other depictions of animal subjects, he craftily positions the chickens in various directions, illustrating extended or short necks that either stoop, curve upward or glance to the sides. The application of patterns on the chickens is equally magnificent, encompassing a rich tapestry of joyful textures.

In “Golden Pheasants in Snow” (ca. 1761-1765), we feel a distinct impression of dark melancholy by the overall somber bluenesss of the background, struggling effortlessly to pull out the pair of pheasants to the white light of snow, at the same time, rendering a touch of sweetness by the pink camellias sitting anxiously under the birds. This creative balance of contradiction in emotions, perspective and impression surrounds Jakuchū’s works and fixates our eyes and senses on the silk scrolls, to view nature in deeper dimensions. 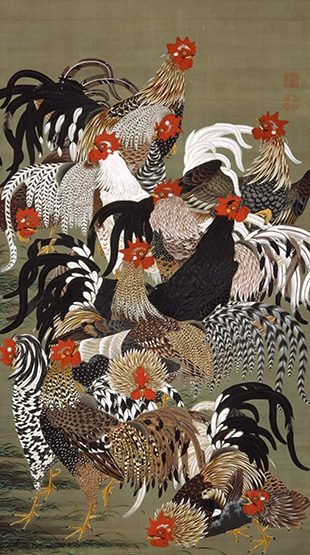 Jakuchū’s urge to pursue the art universe would not have been realized had he stayed on to assist his family business of shop groceries in Kyoto. He retired from the commercial business and decided to train in Zen painting. His loyal friendship with Daiten Kenjō, a Rinzai monk, aided him to access numerous temples and shrines and study vast collections of Chinese and Japanese paintings. It has been said that Daiten coined the name “Jakuchū”—from the Tao Te Ching, to mean “like the void”—which pertains to the Buddhist concept of nothingness. Jakuchū’s works are generally conceptions from inspirations in observing nature at close detail, or studying pictures intricately.

An observer had written that Jakuchū’s works do not evoke death. Cold and grey winters raise the end of hope from the ground by the bright, white snow-laden branches, and where in some secret corner, there will always be a bright pink, red, or orange flora of change. Similarly, Jakuchū’s colorful assembly of flowers are said to intertwine with such implicit intimacy as though the smooth petals touch with arduousness. This genius juxtaposition of nature’s flatness vis-a-vis human dynamism is Jakuchū’s most appealing technique that truly envelops the beauty of his paintings and woodblock prints with irresistible fascination.

The 300th Anniversary of his Birth: Jakuchu. Until May 14. Tokyo Metropolitan Art Museum, 8-36 Ueno-koen, Taito-ku. www.tobikan.jp/en/exhibition/h28_jakuchu.html