Disclaimer: This story will discuss heavy topics like depression, self-harm, suicide and more. Please stop reading if any of these themes may be potentially triggering to you.

Do you love yourself ?

On the surface, this may appear to be a simple yes or no question. However, digging a little deeper—by asking why—can often reveal the very core of an individual. For 27-year-old, Fukuoka-born creative Juri Billy, self-love represents her journey from the dark void of depression to a beacon of psychedelic expressionism. Drawing inspiration from psychobilly culture and Bettie Page, Billy’s entry into the creative world came via pin-up modeling. She has now ventured into styling and photography, while delving into Japan’s more peculiar sides. From being strung up by bondage to shaving off her eyebrows, being reserved is not what Billy is about.

Usually rocking some type of floral print, fringe, or a mishmash of textures and colors, one might think Billy hopped straight out of a Delorean with Doc Brown. With long dark hair that flows down past her waist, it’s an understatement to say that she stands out among the crowds of Tokyo. “I honestly didn’t grow up knowing what normal is. I would have liked to, at some point, behave and dress up like normal,” says Billy. “I don’t know the definition of normal. Maybe I can recognize normal, but I don’t know how to adopt it.

As a kid, I just did what I liked without putting much thought into it. Back then, I didn’t just think I was a boy; I was a boy in my mind. From the clothes and hair to even playing sports, I was even stronger than a lot of the boys. It wasn’t until middle school that I started to change. I was forced to wear the girl’s uniform and started having crushes on boys.” Like many others growing up outside Japan’s major cities, Billy’s upbringing was the typical inaka (rural) life; everyone knows everyone, opportunities are limited and time is usually spent in a world of one’s own. “My junior high school only had two classes for my age group,” says Billy, laying her hair across her lap and petting it as if it was a cat. “At the time, I enjoyed knowing everyone and being close to my friends, but thinking back on it now, school actually sucked. “With not much to experience and the internet not being so popular yet, everyone was influenced by what was either on television or what the popular kids liked. There was no chance to be or express yourself.”

For most Japanese people, junior high school is often viewed as either the golden era or the turning point in one’s life. It’s often referred to by people as the time you “truly become Japanese.” As her elder sister was accepted into one of the top schools in Fukuoka thanks to her academic and extracurricular achievements, Billy’s time to step up quickly approached. “I was super focused. I was studying hard and playing tennis after school,” says Billy. “There weren’t many options for high schools, so you had to stand out to make it into the good ones. I thought that doing my best to be perfect was the only way to do that, because it was the only thing I saw. It was the only world I knew. “During exam week of my second year, I woke up and physically could not get out of bed. As it was flu season, my family and I thought I was sick, but it continued day after day.”

According to Billy, she didn’t initially understand what brought on this feeling, but eventually, she realized that not going to school was a way for her to avoid what she disliked about it—inept teachers and witnessing constant bullying. “My family was so worried. At first, they tried to encourage me, but it didn’t work. My dad even made me get dressed for school one day, but I kept saying no. 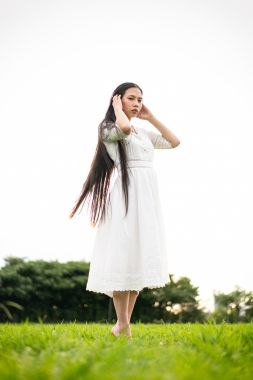 Eventually, they gave up on pushing me to go. “For about one year, I was a complete hikikomori (social recluse),” she says. Hikikomori is a condition in which individuals do not leave their dwelling, and isolate themselves away from society and family for an extended period of time. A 2015 survey conducted by the Japanese Cabinet Office estimated that over 541,000 hikikomori aged between 15 to 39 exist in Japan. “It was weird, though. I felt like I found my life. I enjoyed not going to school every day. I would wake up, jump on the internet and browse WeHeartIt all day, which led me to discover psychobilly.

“Anywhere in Japan at the time, but especially in the countryside, depression as a medical disorder wasn’t really acknowledged. My family was confused, and it was hard on them—they thought the best thing to do was be tough on me until I got through it, and at some point, they just wouldn’t talk to me. “I remember telling myself no one needs me; they would be happier if I didn’t exist; I should just die. It wasn’t until I finished high school and had the thought of traveling overseas that things started to feel better.

I wanted to learn English, so I planned it all out and joined a study abroad program in Australia. “In Japan, I couldn’t talk to my family or friends about what I was going through. I never thought I would be able to make as many friends and open up about sensitive things about myself as I could in Australia. It’s also where I got into modeling.”

After a close friend asked Billy to model with another girl in a revealing latex dress, requests from pin-up and boudoir photographers snowballed in. “I didn’t intend to get into this kind of modeling, or even modeling at all,” she says. “Of course, at first, I was shy and sometimes uncomfortable, but I loved how much creativity and art are involved. Not many people know, but I usually do all the styling for my shoots.” Billy may have found her calling in Australia, but other aspects of life didn’t go as smoothly as expected, and she once again found herself struggling with her mental health.

“From bad relationships, language barriers and being unable to find a place to live, I had a tough time,” says Billy. “At some points, I remember thinking it couldn’t get much worse than this. To this day, I don’t I’ve learned to accept it and realize I don’t have to blame myself. think I have experienced times as tough as I did in Australia, but I can say it all made me tougher.”

“It wasn’t until returning to Japan that I realized I had become friendlier and more comfortable with my body. I would say I’m happier with myself now than ever before. Modeling definitely helped. Having people compliment you on how you look and appreciating something you see as a flaw makes you feel good. So I’m appreciative of what I have. I’m also more aware of myself and my thoughts now.” According to Billy, one of the most significant factors that helped her day-today was consciously avoiding comments of self-hate. “Every once in a while, I catch myself about to do it, but it used to be every day, all day; I’m ugly, I’m stupid, why is my life like this? When bad things happen, it can be useless to try to find a meaning of why it happened. It gets you stuck.

Just as her now-spirited personality reflects her positive mental outlook, Billy actively chooses to dress in striking styles and colors, striving to position her appearance and mind for emotional stability. “Even if I do go back to that dark place, I think I would handle it better,” says Billy. “Sometimes, even now, I still have my dark times, but I’ve learned to use them for inspiration to keep moving forward. “I now know what it feels like to have the worst emotions a person can experience, and because of that marker in my life, I know that I am now happy. That’s the beauty of self-love. It may be nice to have someone who loves you more than you love yourself, but I think it’s way more valuable to love yourself more than anyone else in the world. I’m still working on that part, though.”

If you or someone you know is in crisis and needs help, resources are available. In case of an emergency in Japan, please call 119 for immediate assistance. TELL Lifeline is a free and anonymous English-language counselling available at 03-5774-0992.