A new Japanese film about eroticism, romance and photography

Director Hitoshi Yazaki has built an international reputation with powerful but sometimes weepy slice-of-life works, including March Comes in Like a Lion (1991, screened at the Berlin International Film Festival) and Strawberry Shortcakes (2006). He’s also known for his attraction to sexually charged work, as with his 2011 drama Love and Treachery. It doesn’t come as a shock that he’s chosen to base a feature on the work and life of French painter, poet and photographer Henri Maccheroni. Maccheroni is best known for his photo exhibition from 1969 – 1974 called “2000 Photos of the Sex of a Woman,” which was just that. Somewhat scandalous at the time, and still unable to be exhibited in Japan, the explicit photos of a woman’s vagina were an early example of art which celebrated that part of the body. A certain brand of feminism ran with the idea, such as Judy Chicago and the painting “The Dinner Party” (1979), as well as the stage play The Vagina Monologues, and it is now a genre of its own. 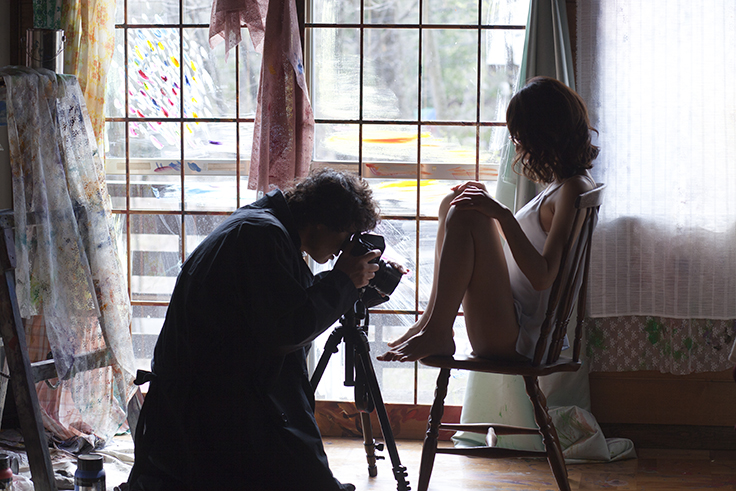 Yazaki uses the book Eizo Yori by Inuhiko Yomota (1984) as a base and draws inspiration from the real life of Maccheroni, whose lover becomes the subject of his photos. Still Life of Memories debuted at the prestigious Yubari International Film Fest and is now getting released at a single theater (K’s Cinema) in Tokyo, with additional releases around Japan.

Rei (Natsuko Haru) is the successful and celebrated curator of the Yamanashi Prefectural Photography Museum. During a trip to Tokyo she happens upon the work of photographer Haruma (Masanobu Ando) at a gallery and becomes obsessed with the photos she sees there. Rei contacts Haruma and arranges for him to take images of her genitals in marathon photo shoot sessions. Naturally the two slide into a sexual relationship but Haruma has the pregnant Natsuki (Rima Matsuda) waiting for him. When Natsuki figures out what’s going on she injects herself into the scenario, complicating things further.

While the subject matter would seem to suggest a lurid tale, Yazaki’s deft direction steers it in a more evocative direction. The photo work is portrayed as poetic and the emotional entanglements show the real world reverberations of tackling this subject matter. Still, the focus here is firmly on a man shooting a woman’s vagina. Is it challenging, edgy art or exploitation on the verge of pornography?