The Boys of Sumo

Stepping into the stables

Beyond breaking the bank for a ringside seat at a sumo match, or spying on a sumo wrestler at a random train station, it may seem impossible to get up close and personal to the action. Then again, few people are aware of the option to visit one of the roughly 45 sumo beya (stables) in Tokyo’s Ryogoku district, where the wrestlers reside. This is where they eat, sleep, and conduct asagaiko (morning practice), often in front of interested parties sitting close enough to see sweat fly.

Both Japanese and foreigners are encouraged to visit the beyas, requiring neither guided tours—it’s free!—nor advanced language skills. However, arranging a visit comes with a bit of finagling, and it’s essential to call the beya ahead of time to get permission, usually within a week of your desired visit. 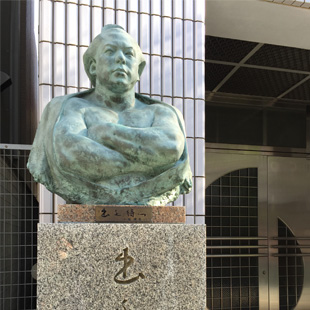 Upon turning up, you are required to show respect in whatever form the beya conveys: “No talking,” “Dress appropriately and no bare feet,” “No eating or drinking” … and, “No flash photography.” A list is dictated to you, or simply assumed by trial and error. Rules and protocol for visiting a beya are available online, but it’s rare to find a personal account of the experience—especially from a non-Japanese point of view.

Though I have seen sumo in the traditional sense, I was mostly curious to see the wrestlers in their natural environment. So, as punishment for not doing her homework, I coerced one of my Japanese students to call around my behalf. Out of my list, only Kokonoe-beya, a stable run by a former grand champion, housing a few white belt champions, agreed to host me and my friends. “Show up between 7 to 8am on Saturday,” my student relayed. But before I could ask any questions about rules or even supply my name, the beya had hung up on her. This was going to be interesting. 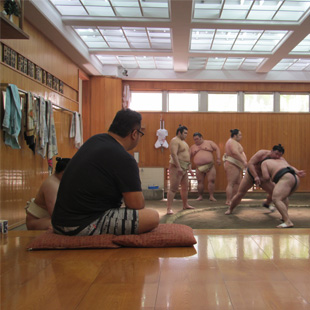 On Saturday morning, we wandered down a residential area of Ryogoku. The beya is rather disguised, located in a nondescript building with a white exterior. My friend had arrived before me, texting, “I hear skin,” referring to the sounds of wet slaps audible upon approaching the beya. I didn’t know what to do. Ring the doorbell? After a few minutes, the door opened, and a short, confused man—most likely an apprentice—stepped out. I stumbled in Japanese, trying to explain that I called ahead to watch the practice. A quick nod and we were granted access, sent toward a pair of sliding doors, and given one simple rule: “no talking.”

Once more unsure of our next move, we entered into a large room. On our side there was a shiny wooden stage area, and on the other side, a dirt floor ringed with a loose rope. As we stumbled in, we immediately garnered the attention of the 10 sumo wrestlers present—mid-stretch—on the dirt side. A few smiled shyly. Most just carried on. And then we learned the other rules as we repeatedly breached unknown etiquette. Seeing cushions already available, sitting at the front of the stage, we made our way to sit. One nearby sumo wrestler grunted “no,” gesturing toward the stack of square cushions in the back. We quickly grabbed them and sat in a line off to the side. Having also neglected to close the sliding door, the same wrestler scowled and motioned for us to close it. Clearly, we were idiots. 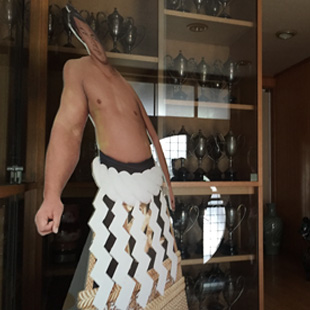 Once our shame had settled, the actual practice was quite fun to watch. The majority of the wrestlers spent their session practicing shiko, stamping their feet and slapping their thighs in a squat to improve lower body strength. One wrestler performed teppo, pushing his hands and alternating hip and leg forward—a practice designed to help topple opponents. A good portion of the practice, however, was dedicated to the unranked wrestlers, who continuously fought a handful of other wrestlers. After each bout, the stable master—whom those front cushions were actually for—offered suggestions for improvement.

For me, the best part of this experience was immersing myself in the intimate setting and watching the personalities of various sumo emerge every once in a while. Even the scowling sumo managed to joke with a fellow wrestler at one point.

We stayed for a little over an hour, but decided to leave once our backs were aching and stomachs growling. Several wrestlers lightly bowed, and we did the same, regrouping outside in a fit of giggles.