Once part of a 100km-long network of tram tracks that crisscrossed the capital, the Tokyo Sakura line is all that remains of Tokyo’s sole public streetcar network. Long timers will recall the line as the Toden Arakawa; 12km of track slow-crawling across northern Tokyo inviting passengers to sidestep big brand sightseeing for a more intimate look into backyard Tokyo.

Minowabashi, in the north-east, is the official start of the line’s 30 stations and home to Joyful Minowa Shotengai. This 400m-long all-weather covered enclave of retro restaurants, snack bars and shopping existed before the coming of neon and extends all the way to the next station of Arakawa-Itchumae.

Moving on, Arakawa Park with its cherry blossoms and public sculptures is only a short stroll from Arakawa-kuyakusho Mae Station, but it’s the next stop that’s likely to appeal. Arakawa-nichome offers direct access to Arakawa Nature Park, listed as one of Tokyo’s top 100 views, and a small museum dedicated to famed author, the late Akira Yoshimura.

The track now starts heading north-west and there’s a subtle wiff of world culture at sibling stations Machiya-ekimae and Machiya-nichome. Meiji-period dragon artwork features at Hakusenken temple, while out of left-field is Africa-ya, a fabrics store with Senegalese designs. Phantom, a personable cafe, is run by an unabashed Elvis Presley fan. 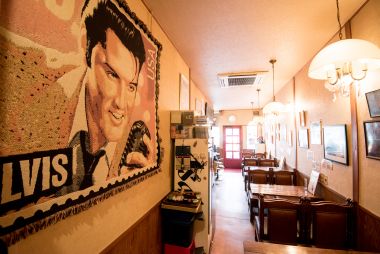 Image courtesy of The Tokyo Chamber of Commerce and Industry

The daring may be tempted to try Daimon-yu, a local sento (public bathhouse) near Higashiogu-sanchome Station, but at next stop Kumanomae, it’s sweet tooth time. Here, the gorgeously red-roofed La Maison du Ange serves up popular chiffon cakes, while Patisserie woo-roo-goo (yes, that’s its name) is blessed with plenty of baked confectionery.

The rattle of the tram arriving at Miyanomae Station signals Asahiya, a comfortable soba noodle bar while, a few steps along, hole-in-the-wall SK Garage, offers cheap Thai-inspired Gapao rice and peanut sauce tacos. Across the tracks sits Oguhachiman shrine whose mysterious origin is given weight with a pillar still standing from the late 14th century.

Quiet Odai Station serves up freshwater eel at Unagi Arakawa, while the hidden Kumo ramen bar is identified only by a single outdoor lantern. Nice local bites, for sure, though Arakawa Amusement Park with its retro Ferris wheel and Sumida River views is a strong temptation for families hopping off at Arakawayuenchi-mae Station.

Arakawashako-mae Station’s claim to fame is Toden Omoide Hiroba, a memorial square showcasing trams from the golden age of Tokyo’s streetcar network. A weekend-only spot, this flashback contrasts with the next stop, Kajiwara. Here, Japanophiles can bask in the glow of traditional Japanese vaudeville at the Kajiwara Irohatei theater. 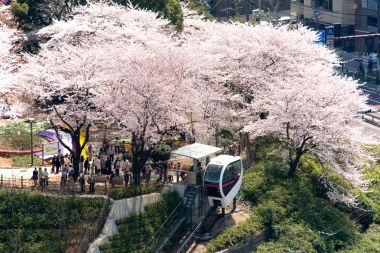 Hedging south, the track leads to Kogyobyo, a cozy Italian restaurant a short stroll from quiet Takinogawa-itchome, while next at Nishigahara-yonchome Station lies the sweet taste of backstreet history. Tosaya, a Japanese confectionery store, was established back in 1938, while Kajinoen is even older, having started its sweet journey in 1914.

Among the temples dotting the area around Shin-koshinzuka Station, 16th-century Honmyo-ji temple and its spectacular koraimon (Korean gate) is a standout. The temple serves as the resting place for Toyama Kagemoto,  a 19th century magistrate with the common touch. His grave honors the man credited for saving Japanese theater.

A trip to Koshinzuka Station is a trip to Sugamo Jizo-dori Shotengai. Nicknamed ‘Granny’s Harajuku,’ this shopping street features not only 800m worth of traditional crafts, restaurants and clothing but also Kogan-ji temple, where a rub of the Togenuki Jizo statue is reputed to be able to cure illnesses. 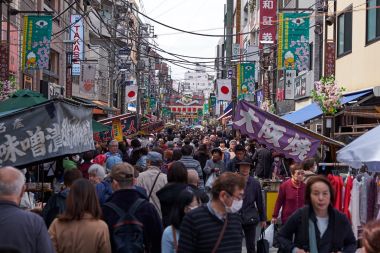 Trackwatching locals at Sugamoshinden Station savor the cheese cream teas and coffees of Cafe Saison, while a short stroll away are modern performing arts centers Otsuka Greco and Yorozu Theater. Otsukaekimae Station has plenty of shopping, but a burst of ramen bars like Ramen Kousagi and Hope-ken Hompo suggests noodles may be the way to go.

Lining the tracks from Mukohara Station, residential pride is on full display with Otsuka Rose Street with hundreds of meters of locally-maintained garden beds. During the Otsuka Rose Festival in May, the fairytale feeling wafting through the air here means a photo stop followed by some great coffee & conversation at Fukumame cafe.

Kishimojin at Kishibojimmae Station is a standout. A go-to spot for expecting mothers, the temple features centuries-old gingko trees and a three-day festival in October. Anime fans can then head to Gakushuinshita station and gush with memory at atmospheric Nozokizaka hill, featured in the hit film, Saekano: How to Raise a Boring Girlfriend. 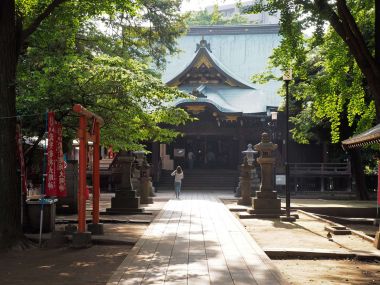 The track then makes its final stretch east towards Omokagebashi where the beautiful Kansen-en Park and cherry blossoms lining Kanda River make the station gorgeous in spring. These blossoms then follow the tram to the final stop, Waseda. Signaling the return of contemporary Tokyo, plenty of university town atmosphere and the lovely Okuma Garden make for an easy end to the Tokyo Sakura line and a day of backyard discovery.

The Tokyo Sakura line can be reached via transfer stations such as the Metro Hibiya line at Minowabashi or the JR Yamanote line at Ojiekimae. A single trip is ¥160 but the Toden 1 Day Pass at ¥400 is recommended.