Born and raised in his father’s Buddhist temple in Tokyo, Kodo Nishimura enjoyed playing the role of the “fairy godmother” from a young age, often teaching his fellow classmates in kindergarten how to dress like Disney princesses.

“I couldn’t take people not knowing how to express themselves,” Nishimura says, this spirit continuing throughout elementary school.

However, as he entered high school, he noticed gender beginning to play a stronger role in social dynamics and soon began to feel isolated. He describes his high school years as living in an “age of darkness” before he was able to move to the United States to study at the Parsons School of Design in New York.

While living and studying in the States, he felt free to begin experimenting with makeup, jewelry and high heels. During his third year of study, he took on an internship as an assistant makeup artist at Miss Universe, paving the way for him to soon join the Miss Universe, Miss USA and NY Fashion Week makeup teams. After graduation, he decided to return to Japan to study Buddhism in order to confront the anxieties he had regarding his roots, becoming officially ordained as a Buddhist Monk in 2015. 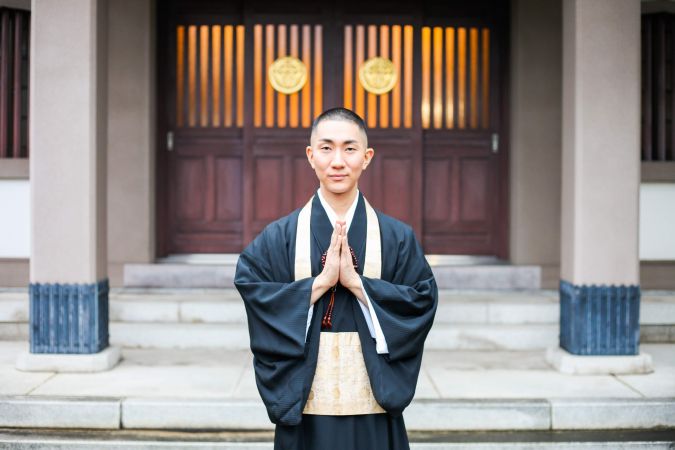 Since then, Nishimura has garnered worldwide attention in popular media, with his lectures on Buddhism, makeup and LGBTQ rights being featured on major outlets such as CNN and BBC. Self-described as “gender gifted,” Nishimura now uses his platform to add his unique voice and perspective to conversations surrounding spirituality and LGBTQ rights, and Watkins Publishing is releasing the English language version of his first book “This Monk Wears Heels” worldwide this month. Part autobiography and part intro to Buddhism, the work feels like an open and candid conversation with a close friend. It also features self-care tools and activities that Nishimura has found helpful in his life, with the hope that others will be able to utilize them to best express their true selves.

It was evident when chatting with Metropolis at his family temple that Nishimura clearly has a strong sense of individualism and purpose. When asked why he felt it was important to write his book, his eyes shone. “Because there is no one else like me. I want to encourage people to be their authentic selves.”

Regarding Governor Koike’s decision to take steps towards recognition of same-sex partnerships in fiscal 2022, Nishimura points out that, while he sees it as a positive step in the right direction, he doesn’t feel that it will make a considerable difference to the freedom of young LGBTQ people in the short term:

“Even if same-sex partnerships are allowed where they live, what I’ve heard from many people is that they still don’t want to show that they’re part of the [LGBTQ] community. Even in schools or within their families, I really feel that society isn’t ready or educated enough for people to feel comfortable coming out.”

By prompting conversations around LGBTQ rights, Nishimura says that he plans to change the discourse, helping young LGBTQ people feel comfortable to freely express themselves.

In Buddhism, everyone is equal

Nishimura sees the media as an important tool in helping to shift societal perspectives. While he would typically split his time between his family’s temple in Tokyo and his work in the U.S, Nishimura has spent the last three years in Japan due to the pandemic, using this time to maintain as much visibility as possible in Japanese media. While there has been a proliferation of positive LGBTQ representations in western media in recent years, Nishimura says that not much has changed in Japan since he was growing up in the 90s, with most depictions of LGBTQ people in popular media either caricatured at best or, at worst, perverted. Nishimura hopes that his position as a religious leader and the backing of the Japan Buddhist Federation, will allow him to convince older generations that if being homosexual is accepted in Buddhist society, there is no reason it shouldn’t be accepted in general society as well.

In addition to public education, Nishimura believes personal education and experience are essential to helping young LGBTQ people gain pride and confidence in their sexuality. In his book, Nishimura lists research, travel and meeting people as key steps in his personal growth, ultimately giving him the confidence needed to come out to his parents at the age of 24.

“I think it’s really important, because we don’t really see LGBTQ people thriving [in Japan]. Even today, you only see out and proud people on Netflix or YouTube, but when I went to Los Angeles, New York and Barcelona, I could really feel the joy of being out. That real experience is so impactful, it’s like listening to a CD versus actually going to the concert,” Nishimura shares. 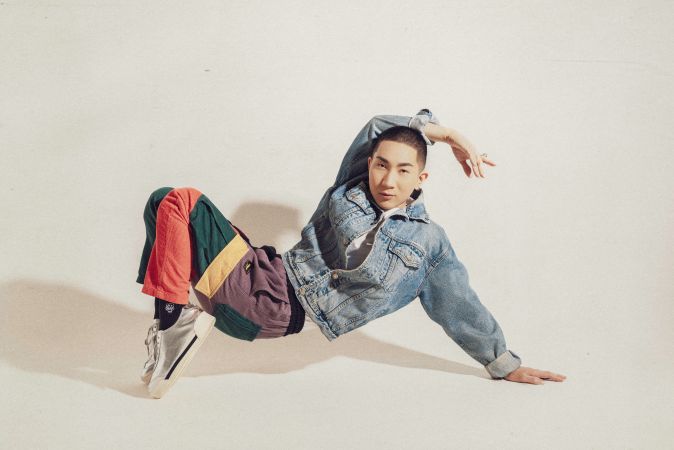 Nishimura feels that there’s also still a palpable lack of hope among the Japanese community that societal attitudes will change any time soon; however, he doesn’t want this notion to affect the confidence of young LGBTQ to take pride in themselves and affect change in their communities. “If you go to a Pride Parade in New York, you see that people are hopeful; they believe that they can and they are changing history. They are the people who changed me. To be complimented in person, interact and talk about your concerns and be comforted firsthand, I felt like I could do it. That’s why I’m able to be out and proud.”

When asked about his choice to leave his out-and-proud lifestyle in New York to return to Japan to study Buddhism, Nishimura admits that it wasn’t the easiest choice, but the right one.

“I think if I hadn’t made that choice, I wouldn’t know how to confront my fears or issues and that would stop me from being a strong person. I knew that I needed to face something that I was avoiding. I knew that I needed to have some obstacles and challenges in my life to be mentally mature. So the good thing was that I returned to Japan to do my Buddhist training and that really changed my perspective. I assumed that it was something not so significant, but it was more than what I expected it to be.”

During his Buddhist training, Nishimura faced some doubts as to whether it was right, or even possible for him to become a monk as an out-and-proud homosexual. Not wanting to invite negative criticism to the community in which he was raised, he made the decision to consult with one of the monk masters in the temple where he was training.

Nishimura was reassured by his teacher’s response, learning that Buddhism treats everyone as equal and, as long as he would use his position as a monk to spread Buddhism’s message of inclusivity and equality, he could feel free to express himself openly. In the same way that Buddhist teachers and doctors choose clothes according to their jobs, Nishimura could confidently wear makeup and heels in his work as a makeup artist and LGBTQ rights activist.

“I learned that there are things that I wasn’t comfortable talking about like my sexual desire and my privilege, but I felt that I need to be transparent in order to touch people’s hearts.”

Speaking about what he hopes people will take away from the book, Nishimura’s fairy godmother personality continues to shine through in his 30s. “I think the main takeaway would be that we don’t have to live according to what people expect. If a monk is wearing heels and being celebrated, you can do what you want and you can still be celebrated. I want to give that hope to people out there.”

Kodo Nishimura’s “This Monk Wears Heels: Be Who You Are” is available from February 8, 2022 at watkinspublishing.com and at all good book retailers