When nothing else is open along the Naka-meguro River

At night, the restaurants and bars in Naka-meguro heave with happy crowds, and lights glitter through the trees that flank its Amsterdam-esque canal.

In the morning? A totally different story. Walking along the Meguro River around 8:30am, the morning sun hovers low enough to roast you from behind. Everyone does their own thing: cycling to work, taking dogs for walks, going jogging. And nothing is open.

My mission to find a plentiful breakfast spread was unsuccessful. There was no smell of bacon in the air, none of the chatter that comes from a busy cafe, and not a sign of a menu that leaves you deciding between sweet or savory. Most shops and cafes along the river only open at 11am.

It took 15 minutes of walking from Naka-meguro station along the Meguro River to eventually spot a glowing Edison light bulb: the sign of a cafe that’s open, and probably trendy. This was The Workers Coffee / Bar. 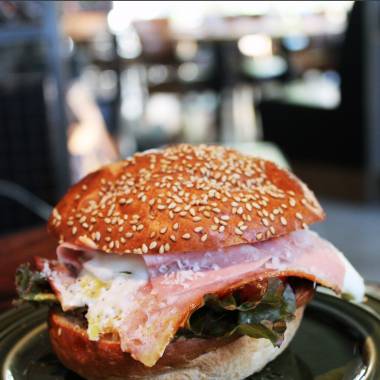 More a coffee shop than a café, the only breakfast options were granola with yogurt, or a breakfast burger. We ordered both, as well as a cupcake winking at me with its flecked gold sprinkles from the cake stand. The coffee was superb and the milk was textured like silk. But it came in a cardboard cup, which annoyed me because we were clearly not here to take away. Everyone else had porcelain.

The granola had a deep caramel taste, and contained whole almonds, pumpkin seeds, and chopped dates. It was too sweet to be considered a healthy granola, but the natural yogurt and tart fruits helped balance it out. It was the first time I’d eaten fresh strawberries and grapes in a while, for fear of breaking the bank buying them at the supermarket. 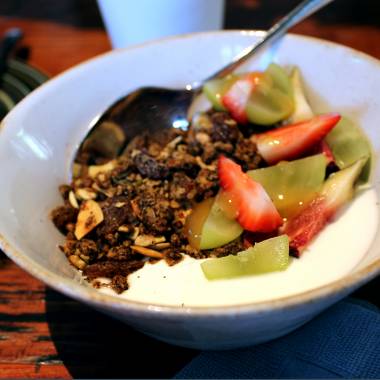 With a second coffee, we polished off the cupcake, which had a smooth whipped pistachio icing, and a heavenly vanilla torso. Later on I saw them top up the cake stand with pumpkin pie, carrot cake, and something that looked like a cream roll.

The Workers Coffee / Bar is a small but airy space, with large windows set into a concrete facade. There is a ledge to sit at against the window, as well as a communal table. Most seats were taken, yet we felt like we should whisper our conversation. It was very quiet, with most people on their laptops using the free wifi.

It was not the humming brunch atmosphere I was in the mood for, but a nice spot for an early morning coffee to quietly mull over what’s on for the day ahead. Sunshine hits the outdoor seats at The Workers later in the day, plus the attached Stall Restaurant appears to have decent lunch sets. It’s probably worth checking out when the rest of Naka-meguro also wakes up.