The presence of American armed forces on these shores has been a divisive and controversial issue for the entirety of the post-war period in Japan. Long before there were student demonstrations in the US there were massive left-wing protests by Japanese students and activists, the occupation of buildings and government shutdowns over the US-Japan defense agreement (known as Anpo). This movement, which saw its apex in 1960, when a new treaty was signed, has been glossed over in Japanese school textbooks and is now largely unknown to a large part of the population. But the problem of American bases in Japan remains. Daisuke Miyazaki’s second feature, Yamato (California), addresses the issue by setting his story in a town near the naval air base in Atsugi.

Reminiscent of Shohei Imamura’s Pigs and Battleships (1961), which also uses characters living near an American base to tell its story, Miyazaki focuses on Sakura (Hanae Kan), a high school dropout and wannabe rapper. She spends her days listening to beats, writing lyrics and staring drunkenly at the fence of the base, which she refers to as California (i.e. American territory). The teenager is unable to perform, however, due to crushing stage fright. Sakura lives in a small apartment with her working single mother Kiko (Reiko Kataoka), who’s dating an American soldier, and her otaku brother Kenzo (Haruka Uchimura). A pathetic, flimsy curtain divides the living space of Sakura and Kenzo so she is constantly wandering the streets, shopping malls and discount stores, as she’s not old enough to attend hip-hop shows. Sakura is abrasive and continually pushing forward her Japanese roots, despite the fact she yearns to have success with a very American musical style. 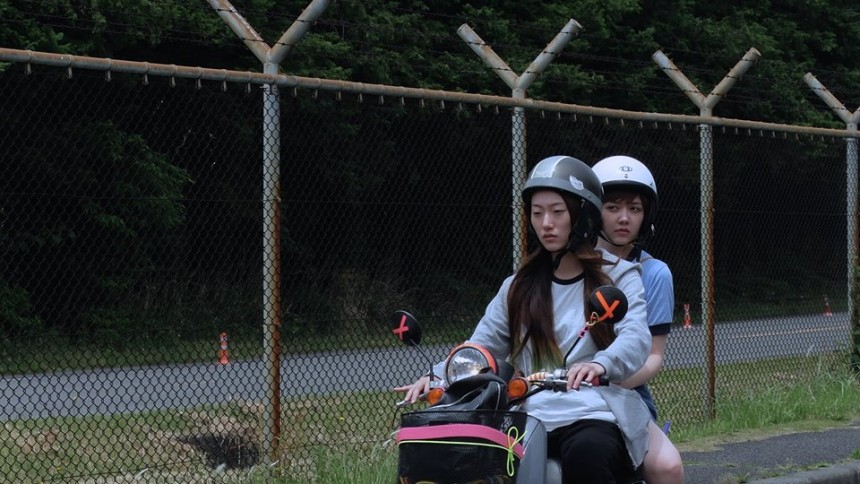 Sakura’s world is flipped upside down by the arrival of Rei (Nina Endo) from the US, the similarly-aged daughter of the GI her mother is dating. At first reticent, Sakura slowly bonds with the teenager and discovers her chirpy, respectful attitude hides an experienced and rebellious underbelly. As the two develop a connection Sakura’s life seems more bearable, although the omnipresent American base remains.

Miyazaki’s filmmaking, both in theme and execution, subtly brings to the fore the contradictions in modern Japanese identity and the challenges faced therein. Sakura prizes her Japanese roots but practices American musical forms; Japanese temples exist alongside shopping centers; Japanese nationalists scream to deport immigrants but the fiercely proud Sakura knows this is not the Japan that represents her. Some of Miyazaki’s shots refer to the legendary (and ‘traditional’) director Yasujiro Ozu, particularly a low, static shot of characters sitting on tatami, which Ozu employed in Tokyo Story. But Miyazaki also employs more Nuberu Bagu (New Wave) techniques, creating a less claustrophobic atmosphere with open fields and large distances between characters. And this brings us back to Imamura, a New Wave director who used Pigs and Battleships to show how Japanese dealt psychologically and economically with a foreign power on their soil. Miyazaki addresses the same question, and its answer must contend with contemporary Japanese identity. (119 min.)