Despite the oft-repeated myth, Coca-Cola did not in fact invent the modern image of a fat, jolly, red-and-white-clad Santa Claus. Kind of a moot point though, now that the soft drink has become virtually synonymous with Christmas. For many people, the holiday season just wouldn’t be complete without commercials featuring the now iconic Cola trucks delivering their black syrupy drink to every corner of the globe in time for Jesus’ birthday. Well, almost every corner.

Despite Coca-Cola being one of the biggest beverage manufacturers in Japan, they never managed to make December 25 a part of their corporate identity over here. That’s less inspiring than it sounds like because Christmas in Japan is still connected with a fast food brand that’s bad for your health. But instead of Coke, it’s KFC. 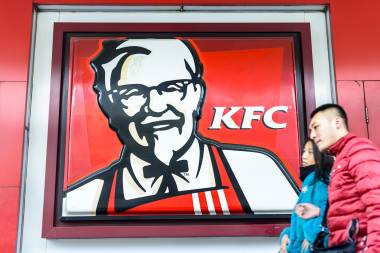 That’s right—every Christmas in Japan, millions of people sit down to a holiday dinner of fast food chicken that comes in a cardboard bucket. The demand for Christmas KFC is so high in Japan that it must be pre-ordered months in advance; in some parts of the country, family packs have to be reserved in November or even October. How did this happen? Is it because Colonel Sanders is an overweight old man with white facial hair, and that reminds people of Santa Claus? Or does it have something to do with the recipe of KFC chicken? After all, if you add “grease” to KFC’s 11 herbs and spices, you get 12, as in the Twelve Days of Christmas. Is that how the tradition got started?

There are two likely explanations for Japan’s Christmas obsession with KFC. It’s possible that, many years ago, American expats living in Japan were looking for turkey for a traditional Christmas dinner, but not being able to find any (as they are rarely sold in Japan) decided to settle for chicken. But then, after realizing that the country also lacks Western-style ovens, they instead mobbed their local KFCs come Christmas time, and were eventually emulated by the locals. Japan does have a long tradition of taking cultural cues from the United States, so this theory definitely has some merit.

However, the much simpler answer is that the end of the year is a time for splurging and treating yourself for pretty much everyone around the globe. As it so happens, meat is notoriously expensive in Japan, as you would expect from a country that gave us Kobe beef, the most expensive meat in the world. Therefore, it stands to reason that Christmas time would be when many Japanese people spend a little more on tasty animal flesh—within reason of course. Seeing as chicken is one of the more affordable kinds of meat in Japan, naturally most families would choose to stuff themselves with feathered dinosaur descendants year after year, thus creating this modern Japanese tradition. 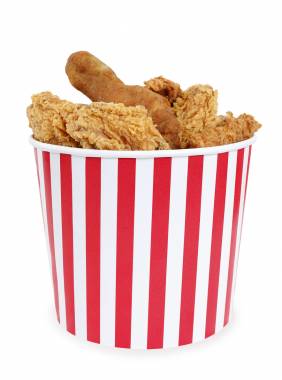 You also have to consider the fact that Christmas is not a public holiday in Japan, and it is anything but sacred over here. For many people, it’s really no different than, let’s say, Valentine’s Day. In fact, a lot of young Japanese people have co-opted the holiday for themselves, turning it into a kind of unofficial sequel to February 14th, only with cake and chicken instead of chocolate. KFC is fully aware of it, too, which is why their Japanese restaurants also serve cake during Christmas time, becoming the full-service stop for all of your Christmas needs. And why not? Without the religious aspect, December 25 is just another day in Japan, so why not celebrate it with animal fat in the shape of a drumstick?

The KFC (Kentucky Fried Christmas) Phenomenon has been such a hit in Japan that convenience stores are now trying to get in on that juicy racket. Most huge chains like Lawson or Family Mart now offer their own Christmas family packs of deep-fried chicken in an attempt to make a dent in KFC’s monopoly. Will they succeed? It doesn’t seem likely, but then again, neither does the idea of an American fast food chain becoming synonymous with Christmas in an East Asian island nation. When you think of it like that, I suppose anything is possible.