Where the world of URL meets IRL

As I waited for a kabuki performance to start, I watched a packed arena applaud a man who appeared on the venue’s big screen, dressed up as the defunct soda marketing character Pepsiman.

It was one of many surreal moments on April 29th and 30th at the 2017 Niconico Chokaigi, an annual event occupying the hangar-sized halls of Chiba’s Makuhari Messe. The event, now in its sixth installment, celebrates the culture and users of Niconico, a Japanese video sharing site once known as Nico Nico Douga. The Chokai offered a chance to bridge URL to IRL, giving the many quirky users a physical space to shine. Dozens of booths were also taken out by major companies, itching to reach younger, web-savvy types.

The 2017 edition met all the same criteria with users manning booths and stages, and biggie-sized corporations taking up space, handing out swag to anyone who wanted it. The jokes and memes popular on the site manifest themselves in the real world. Pop culture touch points, which are big with their community, such as the smartphone-game-turned-anime Kemono Friends, and Freeza from Dragonball Z, were popular among those cosplaying (a substantial percentage of attendees). Attractions displayed a wonky bend, highlighted by a kabuki performance starring Vocaloid avatar, Hatsune Miku, who is Niconico’s biggest name. But the attractions also stretched to include drone games and fan-made VR games. A record of over 154,000 people visited the event over the course of two days while over five million checked into livestreams airing on Niconico. 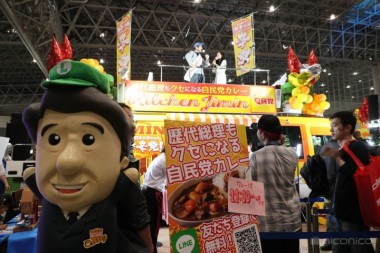 What Niconico Chokaigi 2017 did well was capture the freedom and fun the internet allows for, highlighting individual creativity. Niconico has always run parallel to mainstream Japanese pop culture. It sometimes crosses paths but often exists in its own world with its own stars and language. That landscape was on display at Makuhari Messe. Gamers competed against one another in Pokemon on big stages, while steps away Niconico-born music groups such as ROOT FIVE performed to glow-stick-holding crowds. Booths sold shirts featuring site-specific jokes, and every event streamed online saw Niconico’s trademark comment system displayed on screens next to the stages, with words zooming by the video itself.

What Niconico has always prioritized is creativity and unpredictability. This is something that travels over to the corporate entities that set up shop at Chokaigi 2017. Considering the youthful bend that Niconico users have, companies such as McDonald’s and Suzuki are eager to show their hipness. Even local towns and train lines appeal to the online masses, boosting tourism to their areas. This year’s event was especially rife with traditional Japanese institutions — a sumo ring took up a lot of space in one hall, whilst Shogi and Go had a strong presence too. This is a space where seemingly out-of-fashion things can show they, too, deserve attention in a digital world.

This also spilled over to politics. Japan’s major political parties have been staples at the Niconico Chokaigi for a few years now, Shinzo Abe even appearing at one a while back. Yet with no election in the foreseeable future, at this year’s event these organizations simply reminded people that they existed rather than pressing any urgent issues. It could get strange, from cosplayers standing on political vans and giving speeches to the Liberal Democratic Party offering a free bowl of spicy curry after you took a “pledge”. Similarly, Japan’s Self-Defense Forces had an area where attendees could try on uniforms and snap photos, while the U.S. military offered punters the chance to take photos with camo-clad soldiers. It felt like a Disneyland photo-op totally cut off from real geopolitical issues in Asia… which is probably what they wanted.

Yet that odd feeling is what makes Chokaigi a pop culture highlight in Japan. There were hints that this was changing. Corporations seemingly had more space than users this time around. The music stage also offered slots to mainstream acts and performers who are well known but have little connection to Niconico such as Yuzu. Still, the freewheeling spirit of the video site came through in late April, reminding us that in a rapidly commercializing web, Niconico still values creativity and weirdness. There are basically ads at the Chokaigi for Oreo McFlurries and Attack On Titan. But, whereas a YouTuber would politely tell you about the authenticity of the brand, Niconico at least demands companies get on their level. 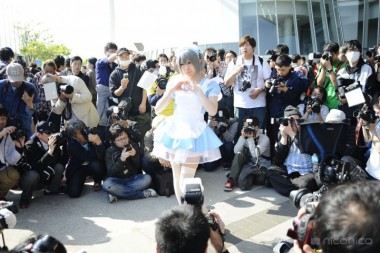 No event at Chokaigi 2017 did this better than the visually stunning kabuki performance, with the hologram of Hatsune Mikue, and the real actor, Shido Nakamura II. This was the second such show at Chokaigi. It started last year, and won kabuki awards. But, the performance wasn’t merely another chance to celebrate traditional Japanese culture. It was also both entertaining and a little bit odd. Fittingly, the climax found Miku herself calling on users watching at home to send her comments, to give her power. They obliged, adding yet another head-spinning twist to an event which always delivers them.