Taking place in Shibuya on May 12, After Hours Festival features a diverse range of artists who come together to perform with the festival’s goal of gathering performers who do not wish to compromise their artistic visions. The festival features international artists like Explosions in the Sky (US), The Redneck Manifesto (Ireland), Svalbard (UK) and Aiming for Enrike (Norway), as well as some big Japanese names like MONO, Boris, toe, envy and downy.

Metropolis spoke to Tobias and Simen of Aiming for Enrike — a two-piece band from Norway who describe their music as “a universe filled with jazz, noise, post-punk & funk” — for their thoughts on After Hours Festival, touring in Japan and their plan to release a new single each month throughout 2019.

Metropolis: This looks like it will be your third tour in Japan. What keeps bringing you back here? Is there any reason why you pick Japan more frequently than say North America?

Aiming for Enrike: There are a couple of reasons. Reason number one is that we get invited more often to Japan than to for instance North America. The other and more important reason is that going to Japan, especially with this band, has always been a dream of ours. The previous tours have been utterly fantastic, so that’s why we are going to come back to Japan as often as we can. So far it’s been a yearly event.

M: This will be your first time playing After Hours Festival. Which bands are you most excited to share the stage with?

AFE: envy, MONO, Boris and toe are bands that we have known of and listened to for many years. skillkills blew our minds the last time we were in Tokyo.

M: Regarding After Hours, the festival’s website states that it has an ideology “to create a space for artists who do not wish to compromise their artistic visions, nor accommodate any authority to gather, and ‘stand against things that ruin art.’” How does your band and its music fit into the event’s theme?

AFE: We surely don’t compromise when we make music. Our main goal is to make something that we both like and that’s it. Lucky for us there are festivals like After Hours where we fit in because of an open minded audience. 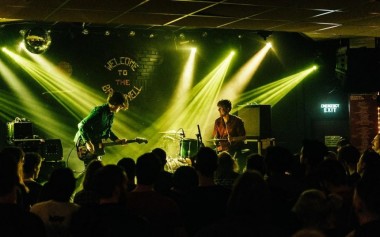 M: Are you guys fans of Japanese music? If so, how did your interest in the music start?

Aside from the bands at After Hours Festival, we like bands like Boredoms, Merzbow, Hanatarash, Hijokaidan, Nengu, Mass Of The Fermenting Dregs, qujaku and of course The Gerogerigegege. I guess it started when we discovered the craziness of the Japanese noise scene and how different it seemed to be from everything else.

AFE: Yes they are taken from “Kafka on the Shore,” “1Q84” and “The Wind-Up Bird Chronicle.” He is easily one of my favorite authors. When we made the album Segway Nation I was reading a lot of Murakami books.

M: Do you have any special process for selecting names for instrumental songs?

AFE: Not really. Sometimes we come up with a name that in some way describes the music. For instance “Nibblonian Car” sounds a little bit like Nibbler’s car alarm in “Futurama.” Other times we name our songs something that references something we like or care about that doesn’t necessarily have anything to do with the song.

Another example is the song “Social Window”. Dawa from Flake Records (who has been doing an absolutely wonderful job with us by the way) told Tobias on our first Japan tour that his social window was open and pointed to his fly. We thought that was funny so we named a song after it.

M: Your latest singles seem to be less erratic and noisy and more “danceable” (as your music is described on your website) than your previous albums, is this move towards “danceability” a conscious effort?

AFE (Simen): We have just been into making danceable music lately. We have always had one or two danceable tracks on our albums, like “Billion Year Contract” and “Social Window” and this time, more or less, the whole album is going to be that way with a bit of a sci-fi vibe.

AFE (Tobias): It’s definitely a conscious effort. I guess the music evolves with what music we are listening to at the moment. I really like a lot of spacey/electronic music like Jon Hopkins, Burial, Rival Consoles, Four Tet, but also stuff like Todd Terje, Louis Cole which has got a more human feel to it. The thing we are doing now feels more outside of a box than our previous stuff. Especially the shows, which are more dance/club oriented than the recorded music. This is a sort of concept that’s being developed over the years, and I guess we still have a way to go. 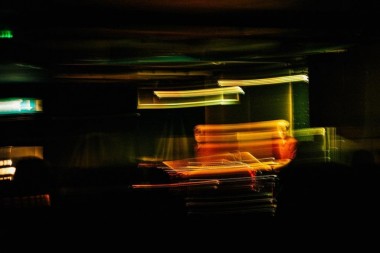 M: When you went into this writing process, did you intend to make an album with sci-fi vibes, or did the sound come naturally through experimentation?

AFE: I guess its a combination. We play a lot in our practice room so there is experimentation. At the same time we talk a lot about what we want to do. And the sci-fi vibes are definitely a thing that popped up after making maybe the first half of the album. It then became some sort of theme. We really like the vibes on “Stranger Things,” Interstellar, Blade Runner and stuff like that, so it’s cool to bring that into our universe.

M: Speaking of new singles, your website says “new singles every month in 2019”, can we still expect to hear 10 more singles this year?

AFE: Yes you can. We work a lot on all of our songs and think it’s a shame when some of them don’t get the attention we think they deserve, so this time we are giving every song a chance. We are really happy with the artwork we got for the singles and album. It’s made by Ben Giles from the UK. Releasing songs with an original artwork gives the song its own life, even though it fits into a bigger picture. 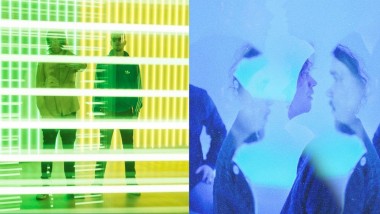 M: Are you making the singles as you go, or are they already finished and being released over the course of the year?

AFE: We recorded the album in two different sessions. We had six months between the two recording-sessions, so we had enough time to compose new music. In these months Simen mixed the music we recorded, so we got a clear picture of what direction we where going, and what we wanted more of. We spent the time making new ideas and figuring out what would complement the stuff we had already recorded.

AFE (Simen): Our friend Nils Jørgen Nilsen from the Norwegian bands Honningbarna and Sløtface is without a doubt one of the most energetic dancers I know. I had the idea of making a video where he’s kind of a DJ-character mixed with Flat Eric from the Mr. Oizo video. He said yes right away and we improvised it and filmed it in our rehearsal space with my phone. I edited it myself and kept laughing through the whole process and I think it turned out great.