Last night, Metropolis had the chance to attend the annual Belgian Beer Weekend. Held in eight cities across Japan, the event made its way to Hibiya Park for the first time ever. Here’s a preview of what it was like.

Like most office workers in attendance I stopped by the festival on the way back from a long day at work. By the time I got to Hibiya Station, I could already tell where I was, judging by the distant thumps of European disco music drifting from outside. Once I got into the actual event, it seemed like the air was brimming with excitement. 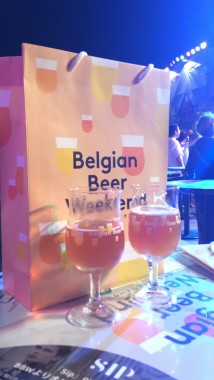 The venue itself was surprisingly lively for a Thursday night, bustling with young adults, couples, tired office workers and families. The park was surrounded by rows and rows of beer stalls, which was a little overwhelming to a complete beer novice. However, for those who have a discerning eye, you’ll see that the stalls are organized based on the 11 flavor categories available at the event. Once you get your drinks, I recommend heading to the stage area where if you’re lucky, you’ll get a good view of the stage and the slightly inebriated attendees swaying to the music.

The Belgian Beer Weekend enters its 9th year this summer and has spread all over Japan to cities like Osaka and Nagoya. According to Jan de Bock, the event’s organiser, the group aims to create a European-style matsuri (festival) in order to bring people together over authentic Belgian beer. As Bock puts it, “Belgian beer is a cultural heritage and lifestyle.” The event showcases around 110 types of beer, all of which are imported and selected by Belgian producers. Perhaps that explains why I found my 10% beer slightly bitter yet very smooth, fruity and drinkable. According to Bock, this “fruitiness” is a result of brewing with orange peels, giving even the most bitter of beers a pleasant undertone.

Whether you’re a beer drinker or not, you’ll find there’s something for everyone. Head to the Belgian Beer Weekend for great street food (e.g. Belgian fries), disco music (although much of the time this consisted of stylised cowbells…), and of course, authentic one-of-a-kind beer.

Fresh beer in the fresh air at a Danish craft bar