Stepping up to take the decisive penalty kick at the 2011 World Cup, Saki Kumagai barely had anything left to give. A gruelling 120-minute encounter with the U.S. had taken its toll on all the players. The topsy-turvy game in Frankfurt finished 2-2 after extra-time and now everything came down to the dreaded shootout.

With Carli Lloyd blazing over and goalkeeper, Ayumi Kaihori saving two of America’s penalties, it was up to 20-year-old defender, Kumagai. If she could muster enough energy to strike the ball past Hope Solo from twelve yards, Japan would be the first-ever world champions from Asia, a monumental feat for a side who’d failed to get past the first round at the previous two tournaments.

“Walking toward the penalty area, I was dead on my feet,” Kumagai tells Metropolis. “You don’t want to be the one to miss such an important spot kick. At the same time, it was exciting to be in that situation in the final. I hit it the best I could, and to see the ball go in was a wonderful feeling. It was even better when I turned around to see the smiling faces of my teammates. I immediately ran towards our keeper to celebrate.”

Eight years on from that triumph and Kumagai is now the captain and most important player for her country. An inspirational figure with more than 100 caps to her name, she’s equally adept playing at centre-half or in a defensive midfield role as she does for club side, Lyon. Since making her debut for the national team as a 17-year-old in 2008, she’s played in two World Cup finals, an Olympic final and last year lifted the Asian Cup in Jordan. 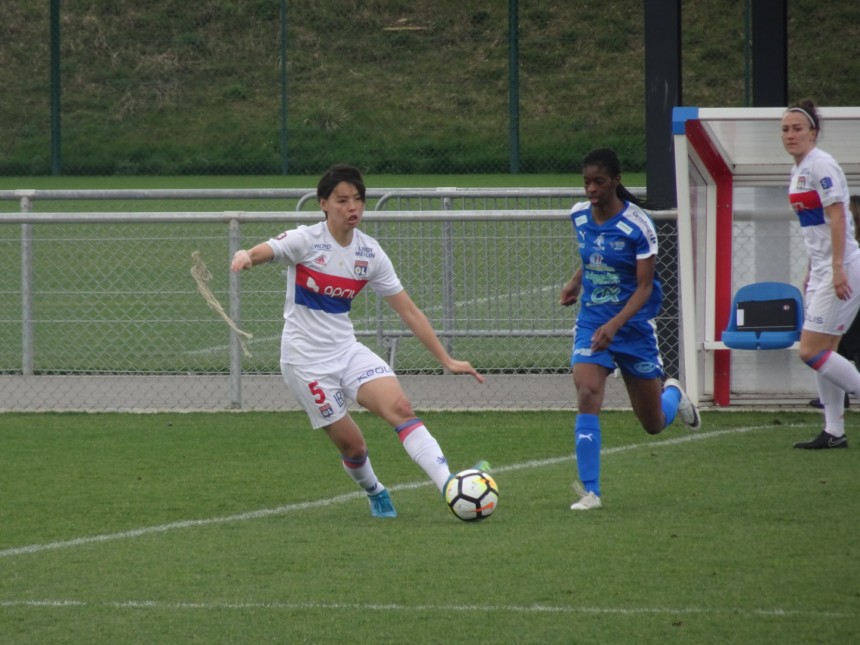 An elegant and composed midfielder/defender who rarely gives the ball away, the Sapporo-native was recently nominated by the BBC for the Women’s Footballer of the Year 2019 award along with five other players. She lost out on the prize to her club teammate and close friend, Ada Hegerberg, who Kumagai describes as “a very good human and a highly ambitious striker, who’s always hungry for goals.” The first-ever Ballon D’Or Féminin winner won’t be at this month’s World Cup in France due to a dispute with the Norwegian FA over the state of the women’s game in her country.

Kumagai will be there, however, leading out Japan for their opening match against Argentina at the Parc de Princes in Paris on June 10. After that, it’s off to Rennes for an intriguing encounter against first-time qualifiers, Scotland, followed by a repeat of the 2015 semi-final, when they meet up with Phil Neville’s England in Nice. It’s a tricky looking group, though Japan will fancy their chances of qualifying.

Coach Asako Takakura has selected a squad with a nice balance of youth and experience. As well as the captain, four other players — Mizuho Sakaguchi, Aya Sameshima, Rumi Utsugi and Mana Iwabuchi — all featured in the previous two tournaments. Many others will be making their World Cup debuts. Ten players come from dominant Nadeshiko League side, Nippon TV Beleza, including 21-year-old striker, Rikako Kobayashi, seen as a rising star in the game. Other youngsters to look out for include Asato Miyagawa (21), Moeka Minami (20), Riko Ueki (19) and Jun Endo (19), who all helped Japan win the 2018 U-20 World Cup in France.

“We have a young pool of players — 14 of the squad are aged 23 or under — and as a whole there probably is a lack of experience, but I believe in the potential of this team,” says Kumagai. “The first goal is to get out of the group, which won’t be easy. We haven’t played Argentina for a while, but we know they’re a side with many good individual players. While we’ve haven’t met Scotland before, we expect them to be strong as their squad members are all playing at a high level. England, meanwhile, have been building for many years. Their mentality has changed. The new manager’s very serious about going to France and winning the tournament.”

While Neville’s Lionesses are ranked number three in the world, Nadeshiko Japan are down at number seven. Expectations will be lower than they were four years ago when Norio Sasaki’s side went into the tournament in Canada as champions. Overall, they fared well, but the performance in the final was abject. They were outplayed by America who strolled to a 5-2 victory.

“I can’t explain in one sentence why we lost, but set-pieces certainly played a big part,” recalls Kumagai. “It’s something we prepared well for, yet on the day it all went wrong. Two of their goals were almost identical. It was poor from our perspective, but you have to say America were very strong in exploiting our weaknesses.”

Since that defeat, Kumagai’s career has gone from strength to strength, particularly at club level. Plying her trade in France for Olympique Lyon, she has won six French league titles and five domestic cups. In May, she came off the bench as her side thrashed Barcelona 4-1 to win a fourth consecutive Champions League trophy. The first of those four was decided on penalties with player of the match, Kumagai, firing home the winning spot kick.

“That was less pressure than in 2011 because I’d experienced it before,” says Kumagai. “Being at Lyon is such a pleasure. The training is fun and you’re constantly learning. To be playing football with your best friends at such a high level is amazing. I also love the city. It’s the location of the semi-finals and final of the World Cup. Hopefully we’ll be there. It would be a dream to lift that trophy at my home stadium.”