Heavy metal culture in Japan is not what you think

When talking about the “all or nothing” nature of heavy metal fans, musician/film director Rob Zombie once said: “No one goes ‘Yeah, I was really big into Slayer one summer’ y’know? … I’ve only met the guy who’s got ‘Slayer’ carved across his chest.” This tells us two things about Rob Zombie: he’s seen a lot of metalheads topless, and he’s never met the casual Japanese metal fan.

Although there are many diehard fans of metal music in Japan, with hair long enough to cover their “Slayer” chest-carvings, the majority of the country’s headbanging fandom isn’t nearly as gung-ho. You can see it before a metal show even begins when Japanese fans form orderly lines and patiently wait to be let into the venue, which is decided by their ticket number. Those who bought their tickets early will be admitted first, even if they arrive literally one second before the doors open.

But the thing about Japanese metal is that, once you’re inside the club, order takes a backseat and lets chaos reign. When the first guitar chord hits, any Japanese metal show erupts into a frenzy of headbanging, screaming, and violent moshing.

And, you might see many people in the crowd who do not seem to belong—shorthaired businessmen in their ironed dress shirts and creased pants, often clutching a briefcase close to their body. Many years ago, I was one of those people, and the reason I was clutching my bag was because I had important documents inside that I had to present the following day at work. But by the time I got to the concert, all the coin lockers were taken and I was forced to take my files with me down to the mosh pit.

However, although I was worried about my files, I wasn’t worried about being made fun of by the Japanese fans. For one, I wasn’t the only one in a collared shirt at the concert. These people are the lesser-known face of Japanese metal fandom. They may not dress exclusively in black or even listen to metal every day of their lives, but they too make up the fabric of the heavy metal culture in Japan. And although they aren’t representative of the whole, they do share many similarities with the vast majority of Japanese metal fans.

One such fan, Nanako, explains: “Metal is the only music that I enjoy. I feel like I’m listening to it with my entire body, rather than just my ears. However, I don’t support myself with metal music or anything like that, so I can’t really call it my life. But at the same time, calling metal a hobby just doesn’t seem to do it justice.”

To put it in other words, Japanese heavy metal fans definitely treat the music seriously, but they don’t feel the need to make it their whole identity. This seems to be one of the things that have convinced ex-Megadeth guitarist Marty Friedman to move to Japan. 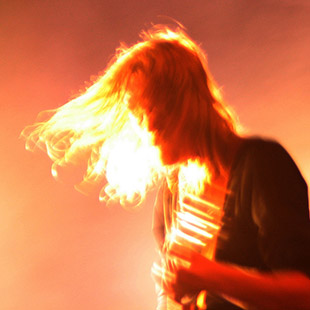 After leaving the famed thrash metal band in 1999, Friedman found a new home in Japan where nowadays he’s known more as a whacky TV personality rather than a heavy metal musician. He actually got his start on a show called Hebimeta-san (Mr. Heavy Metal) whose very purpose was to satirize metal and hard rock cultures. It was a perfect fit for Friedman who said he’d grown tired of how seriously people were taking metal in the West. It’s not that he dislikes metal music. In fact, his 2014 album Inferno could easily be called Friedman’s most intense work ever. But at the same time, it doesn’t stop him from enjoying pop music like Babymetal.

Babymetal is a fusion of heavy metal and idol music, the latter primarily focusing on cute, young starlets singing inoffensive, sugary pop. Babymetal took that concept of young performers (some as young as 11 when the band first formed) but then replaced the sugary music with metal rhythms and aggressive lyrics.

In 2013, Babymetal performed for the first time at Loud Park, the largest heavy metal festival in Asia. I’ll never forget that year, because of the merchandise booths. Every Loud Park that I’ve attended always had massive lines to buy T-shirts, CDs, show programs etc, but in 2013, the line had to be split into two: one just for Babymetal goods and one for the dozen or so acts from around the world, including such heavy metal legends like Behemoth or Yngwie Malmsteen. The Babymetal line was easily twice as long as the other one, and was made up of every kind of fan imaginable: men, women, teens, seniors and, yes, the occasional short-haired businessman in a dress shirt.

Marty Friedman is reportedly a huge fan of Babymetal, but whenever he’s asked about it in interviews for foreign media outlets, the underlying question is always the same: How can you enjoy the music of three little girls playing metal? His answer is always the same: if you are secure enough in your love of metal, there’s nothing stopping you from enjoying Babymetal.

Abroad, where the metal fandom gets very serious about their music, Babymetal is still mostly seen as a novelty act, which is probably among the nicer criticism that female-lead metal acts can get in the West. In Japan, though, diehard metalheads proclaim their love for Babymetal with pride.

“Metal is my life,” says Ryunosuke, a metal fan from central Japan. “The main reason I give it my all at my job is so that I can buy more CDs and go to more concerts. And I absolutely love Babymetal. They are great performers, and they have successfully merged metal and idol music. I can’t wait to see what they do next.”

Takeru, another Japanese metal fan, concurs: “I do like their music. They are cute, but they are also great performers, and it’s a pretty original concept, and it’s just really fun. What’s wrong with that?” Absolutely nothing. Many Western fans might not like Babymetal but you have to wonder how much of that is due to the band not conforming to the “typical” metal image. And since when has heavy metal been about conformity?