When Star Wars premiered in 1977, it featured a relatively unknown actor as its hero. Nearly four decades later, Star Wars returns to the big screen in similar fashion. Just as Mark Hamill thrilled fans back then, Daisy Ridley is about to do the same. The young actress tells Metropolis how she feels about being the heroine in J.J. Abrams’ new film.

How did you hear about the part?

The first time I actually heard about this, I was with three friends—one’s a makeup artist and the other is a stylist. Somebody said, “Did you hear Star Wars is coming out?” I immediately e-mailed my agent and said that I really need to be seen for this. I don’t know why; I just had this weird feeling. I wound up getting an audition. So, for the first audition, I was an hour early, literally pacing up and down outside. I’d never been nervous like that before for something. It was the first time in an audition process that I felt everyone was rooting—not for me, but for the idea of an unknown person getting the part. 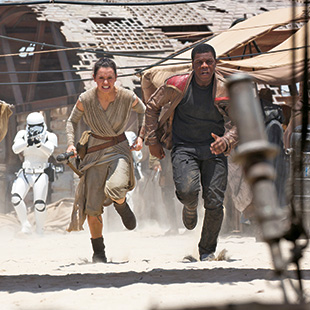 Did you know you were going for the lead?

Who is Rey and what is her role in the story?

Rey begins in her own world. She goes on this crazy adventure and meets Finn and BB-8 and she finally starts to make these bonds she’s never had before. It’ll be epic.

Tell us more about your look in the film?

We went through many versions of hair, and a few versions of costume. When we finally decided on the hair and I put the costume on, you could feel everyone go, “That’s how she should be.” Everything is supposed to look like Rey put it together herself. So, the hair is the iconic three buns, which we call the three knobs. The costume is gorgeous; it’s pretty, but she works in it. Everything she’s got fits her perfectly. I put the costume on and I feel pretty badass.

As you said, your character is badass, and there’s a lot of action in the film. Talk us through the training process.

I started stunt training just a few weeks after I found out [I was cast]. We did hand-to-hand and used boxing to warm up. J.J. wanted me to look like I work out, so I’ve been working the upper body. That was four hours a day, four days a week for three months. Without the guys we’re training with, there’s just no way John Boyega and I would have gotten through Abu Dhabi. The running stuff was so hard. It was a relief when there were explosions because we needed a break from the running. I haven’t stunt-trained for a while, but I’m still fitness training to keep the levels up. There are such long days that you need the energy it brings.

What was the experience of filming in Abu Dhabi like?

Abu Dhabi was really nice because we were able to go a day early. John and I were taken around the mosque and palace, which were really lovely. We had a couple of days to get used to the heat as well. It was so hot that you could literally feel the sand burning through your shoes. But once you give in to the heat, it’s OK. You know it’s consistent; it’s not going to change, so there’s no point in fighting it. But everyone was so well looked after.

When it got to the running bits, the hardest part was when it was a mix of hard and soft sand. That was a killer on the legs. The night before the last day of filming, that run was easier but my lungs were really pushing it. It got hotter and hotter. You’d go from doing lots of stunt things, then to acting and intimate moments. Toward the end of Abu Dhabi, I looked back and thought, I’ve really come a long way since the beginning. I look back now and wish I could do the first few days again.

Do you feel that Rey is your character now?

I realized what this film might be to people. I hope that people will love it—I think they will. I feel like I’m coming into my film family. Every day is fun. I haven’t had one day where I didn’t enjoy it. There are moments when I think [of] how many people love Star Wars, and it’s scary trying to fit into that world that people know so well and love so much. It’s nerve-racking thinking what Rey might represent to these people, and whether they’ll like her or not.