This month Metropolis delves into the capital’s kitchens

“Again the ticker tape. This was starting to feel like a sporting event. Sweat was running off my nose, and I was moving fast, as fast as my concentration allowed, flipping, turning, poking, being burned … And still more orders. ‘This is the buzz,’ Memo whispered, still behind me. ‘This is what you live for,’ Andy said, picking up plates from the pass, adding, mysteriously, ‘it feels really fucking good’ …

It was, I concluded, my first glimpse of what Mario had described as ‘the reality of the kitchen’ – a roomful of adrenaline addicts.”
–Heat by Bill Buford. 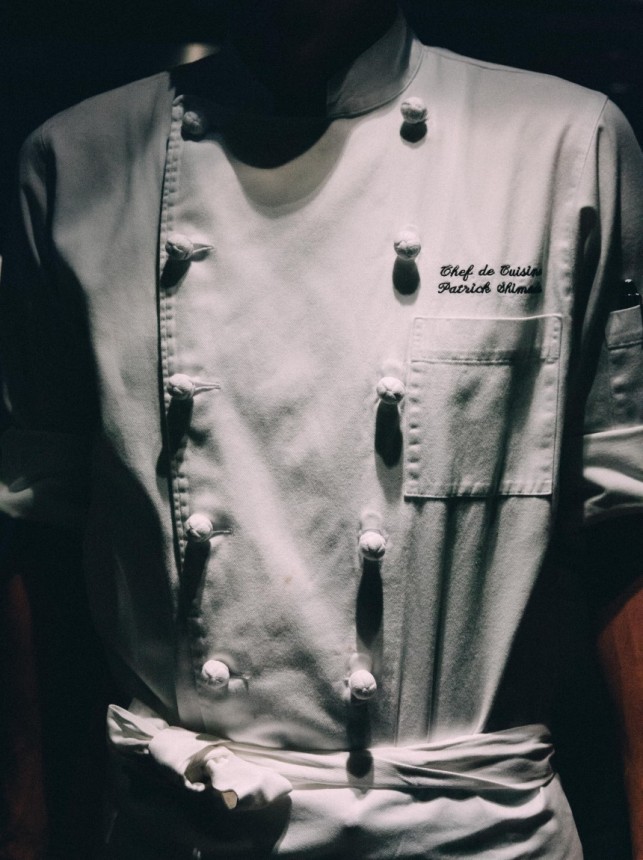 There’s a warm amber glow in the kitchen. It’s quiet and the eight chefs present are focused on their individual stations. One is carrying huge glass bowls of mashed potatoes, another prepares hollandaise sauce; the guys in the background are cutting and chopping vegetables, another cooking sizzling beef patties and a lonely figure in the corner measures sugar into a bowl which will later transform into incredible chocolate tarts.

It’s just before brunch service begins on a freezing cold Saturday morning in January, but the kitchen roars with heat. The smells and cacophony of kitchen sounds sometimes bleed through to the dining area. There’s no Gordon Ramsay here. No flying pots or verbal volleys of abuse and intimidation. There are only smiles, dedication and a desire for perfection. The chef de cuisine mentors the commis chefs, teaching them how to painstakingly recreate his beautiful potato cake with smoked salmon, cream cheese, capers and red onion. The commis hasn’t prepared this dish before but the more senior chef, and most senior in this kitchen, is patient and shows how to achieve perfect spherical potato slices, which are placed one by one in a hot pan and then finished with six minutes on each side in the oven. The restaurant is closing in a matter of days (for renovation) so there are dishes on today’s menu which have been chosen to clear the larder out of stock — in a valiant attempt to minimize waste. 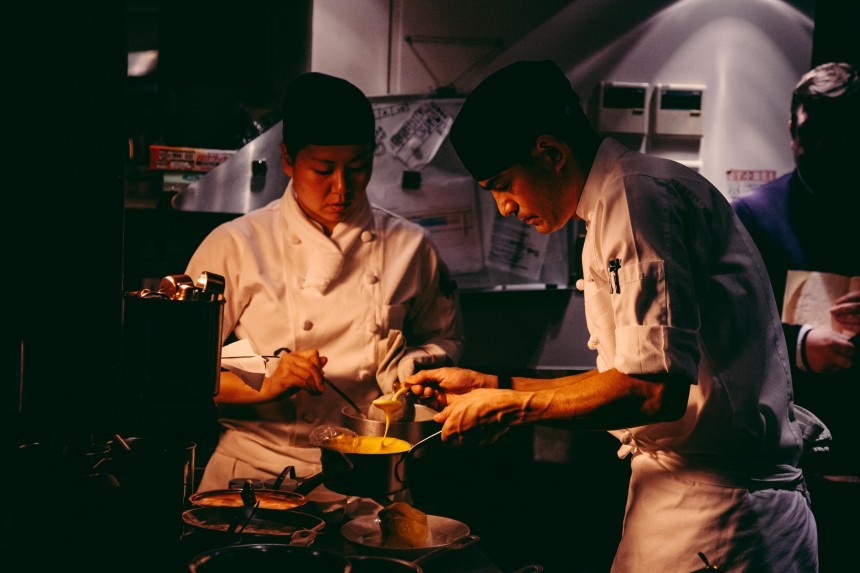 There’s not a lot of glamour here. Chefs can work for 15 or 16 hours on busy days that punish the extremities of the body. Standing all day, every day has pretty brutal effects on the feet and the occasional burns and cuts to hands and fingers make this an unusual career choice – perhaps it’s a profession where you don’t choose the job but the job chooses you. Cooking is a job traditionally seen as a career for misfits, degenerates and lost souls. Read Orwell’s Down and Out in Paris and London, Anthony Bourdain’s Kitchen Confidential or Simon Wroe’s Chop Chop and it becomes clear that many kitchens are staffed with heavy drinking, drug-abusing, visa-dodging libertines. That may be the case in some of New York’s restaurants, but in Tokyo the situation is, predictably, very different.

We’re at The Oak Door restaurant in Grand Hyatt Tokyo, talking to chef de cuisine Patrick Shimada, who has recently arrived in Tokyo from his previous position in Hong Kong. Shimada, like many chefs, has led a peripatetic chef’s lifestyle which has seen him working all over the U.S. and Asia. Originally from San Diego, he worked as a lifeguard for nearly a decade before joining the culinary world. “My cousin heard I wasn’t doing anything for the summer,” says Shimada. “He said — hey, do you wanna come out to New York to work in a restaurant? And that was it. It’s a lot of fun.” 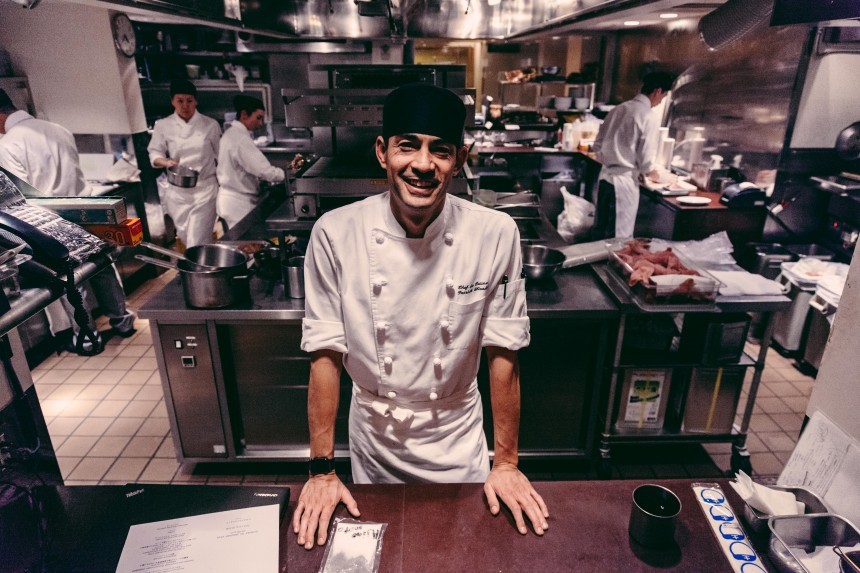 Shimada explains that his grandfather had been a cook in the army and he has Japanese ancestry which might explain his love of fresh produce. Friendly and passionate, Shimada talks about how the machismo of kitchen life is well gone. “I’m pretty lighthearted in the kitchen. You don’t really see the Ramsay approach anymore. The more stress that I can take and not pass on to the staff, the better the food will come out. I tell people that you can taste emotion in the cooking. You can taste it — if something is not right. The more laughter and smiles, the better the food.” 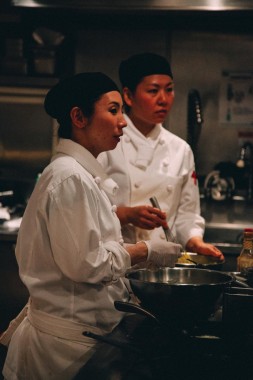 In Shimada’s kitchen there are four women, one of whom, Megumi Wakamatsu, is pregnant. He explains that this is very different from his years in Hong Kong where there were very few female chefs. The ratio of male/female in The Oak Door kitchen is 60:40, which may surprise some Japanese commentators as the country is often derided for gender inequality and lack of a strong female workforce.

“I grew up with a mom who could cook well. She was a housewife; I used to watch her cook in the kitchen,” says Wakamatsu. “I started in The Oak Door last February, but before that I was at The French Kitchen for two years. After my baby is born I want to come back to my job here.” Shimada stresses that working for a large hotel chain such as the Hyatt makes it easier for women to return to work. Working for smaller, individually-owned operations wouldn’t be so flexible for some female employees.

On the other side of the city, we sit down with Executive Chef Tom Angerer of Park Hyatt Tokyo. Austrian Angerer has been in the capital for nearly five years after stints all over the globe. He explains the hierarchy of the chefing world — executive chef, chef de cuisine, sous chef, chef de partie and commis.

“For me, as an executive chef, especially in a big hotel, I have over a hundred chefs to look after. I have six outlets and four main restaurants. So my role is to provide guidance and make sure I put a team together which can run the operation on a day-to-day basis. Each of my restaurants has a chef de cuisine, which is like a manager of the restaurant. They have their own team and they’re responsible for their own outlets — which I still oversee.” 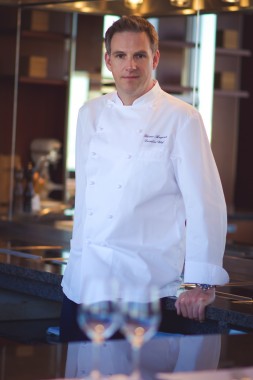 “I work together with them to develop the menus, and at least once a month I go to the markets. I go to Tsukiji or Ota to look at fresh produce and I do some travelling in Japan to find produce and meet producers. Then we decide menus and do menu tastings. So during this time I cook, but on a normal day-to-day basis, unfortunately, I don’t get to cook as much as I would like to.”

Angerer stresses that although being a chef can look cool on TV, it can be a particularly unforgiving environment for those entering the industry. “Lucky for me and my profession, chefs gained a bit of rock star status,” says the charming Austrian. “Now we have a whole network of TV channels devoted to food. And of course we had Gordon Ramsay and Jamie Oliver. Chefing got a lot of airtime and became a very fashionable job.” But younger generations entering the workforce with this idealized image of the industry often don’t understand the realities of the industry. “We always tell them … you can say goodbye to your friends and your family over holidays because you’ll be working. But it’s a very rewarding job and you can get instant gratification from customers. It’s a lifestyle, not a job.” 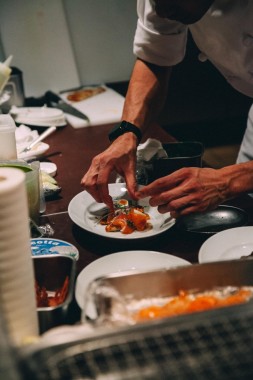 okyo has the most Michelin-starred restaurants in the world, and it’s well known that the Japanese are obsessed with food. It’s almost a rite of passage that young Japanese cooks serve their time in European kitchens, to finally return to their homeland armed with the essential knowledge to run great authentic restaurants, from pizzerias and burrito joints to hamburgers and upscale French cuisine. Angerer and Shimada both mention that the hero worship of French cooking is waning but still very much part of the Japanese restaurant industry. “We don’t tend to use French terms here so much,” says Angerer. “However, Japanese restaurants have always been very French — everything luxury here has a French influence. And French cuisine has an air of luxury and that’s why you have so many French restaurants in Tokyo. And every big French chef has a restaurant in Tokyo–Robuchon, Ducasse etc … And globally the basics of cooking are still based on French terms.”

Shimada and Angerer share this obsession with great produce. The former plans to implement a change from the Australian beef used in his kitchen now to American or Irish beef, due to quality issues, while Angerer waxes lyrical about the purity of Japanese food, going on to say that it’s practically impossible to eat a bad meal in this country. When Shimada speaks about steak, dry-aged beef and meat in general, his eyes shine and his obsessions become clear. His restaurant is closing for a month or two to complete renovations, which will see the expansion of the present kitchen to include a partially open kitchen with a new broiler, giving the steak on offer an unmistakable crunch on top. 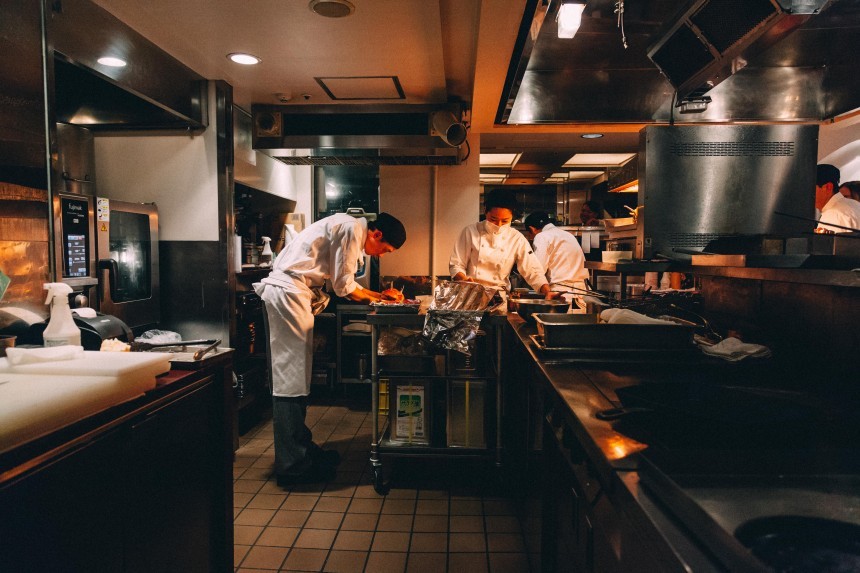 Although a chef’s life can be arduous, it can also be rewarding and creative. When not stuck in the kitchen, Shimada and Angerer like eating ramen, sushi, pasta and burgers — a world away from the refined cuisine they cook on a daily basis. The Park Hyatt executive chef spills the beans on the debaucherous image chefs have outside the kitchen. “We work hard, we play hard. Chefs have always been the wild boys and party animals. Chefs need to have some sort of release after their shift. You’ve been under pressure all day and you finish service at 11pm but you can’t go home and go to bed because your mind is still moving. So you definitely need to wind down and reward yourself with a cold beer or two.”