Although Chinese Football’s name suggests a nod towards the western band, American Football, the Wuhan-born math rock quartet’s sound is actually a blend of many features, including their Chinese roots and strong Japanese influences. Metropolis caught up with the band’s members ahead of their Japan tour for 2019, finding out more about their new album, their views on Japan and their future plans.

Metropolis: Could you tell us a bit about your new album, Continue?

Chinese Football: We wrote more lyrics this time so it may sound more catchy, or maybe less, but we still love what we’ve made.

M: Are you an anime fan? Why does each album have an anime cover?

CF: Since our first album, we have been working with one of our friends who is a cartoonist and we really like his work. The content of our songs is very abstract. We thought that cartoon characters might be able to express our awkwardness and contradictory emotions in songs intuitively. Also, it helps us to stand out amongst other bands. So we keep working with him.

M: What is the Chinese music scene like? Are there any bands from your city/country you are close to?

CF: In our home town, Wuhan, there was a huge punk rock scene in the 90s. But there are few bands in the area nowadays. Because of the internet, indie scenes have become disconnected from the region now, and what’s sad is that music streaming platforms have a huge influence on what young people listen to, taking them further away from their local scenes.

M: How do you come up with the lyrics? Are you allowed to express political views in your music?

CF: The lyrics are just about what we think and what we feel. We do not talk about political things because I don’t want to participate in things that I’m not good at. I just talk about the band’s confusions and thoughts. 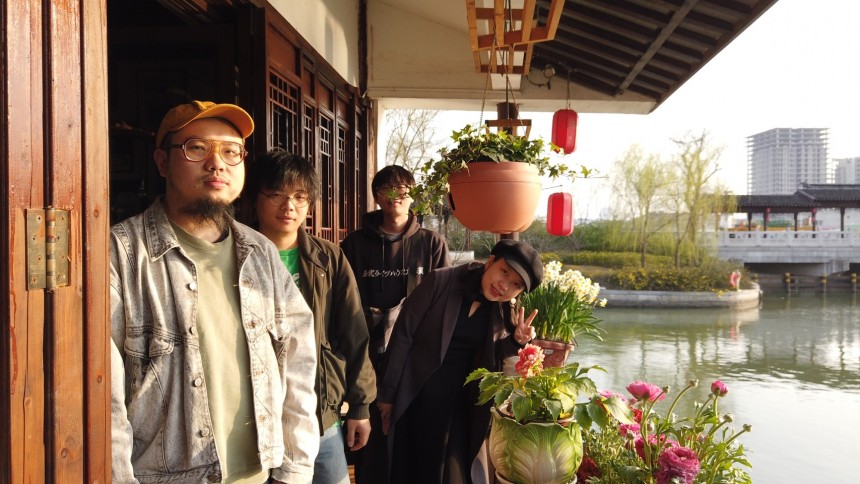 M: Chinese football is a hybrid band of Japanese and Chinese culture in a sense that a lot of Japanese influences can be seen in your music and album covers. Do you think the band is building bridges between those cultures?

CF: I hope so. We grew up watching Japanese anime. In fact, a lot of old Chinese pop songs we listened to when we were young are actually cover songs (originally Japanese). I have a personal label called Sango Records, which introduces Japanese bands to China and Chinese indie bands to Japan.

M: In another interview, you mentioned you are a fan of Wes Anderson. Have you seen Isle of Dogs?

CF: Of course. It’s a great movie and I’ve watched it three times. Compared to his early work, it’s more of an easy watch but it doesn’t lose any of his creativity or originality.

M: Are you still living in Japan? How do you find living here? Any differences between visiting and living?

CF: Yes, but I spend most of my time in China as the band is quite busy at the moment. When I first came to Japan it was just for traveling, but I found myself enjoying being here. When it came to choosing a place to live I chose Kyoto, I don’t really like busy places. I don’t have many friends in Japan, so sometimes I feel that I’m still a visitor. But I enjoy feeling like a visitor, watching different people and being in different cities. That’s probably why I like touring too.

M: What are you excited about in regards to your third Japan tour?

CF: We can play our new songs and play with new bands, make new friends, and taste new food. We can also meet the people and bands who were so nice to us on our previous tours. We are very much looking forward to seeing them again.

CF: I like this question. It is a new start for all of us. Our new goal is to make more and more songs and visit more and more places. These are the things we are supposed to do when we are young but it will never be too late to do them, we might grow up but we believe that we’re still young.