The best drips in Tokyo

There’s perhaps never been a better time to get a cup of coffee in Tokyo. The scene has exploded over the last few years, and the increased quality of craftsmanship is evident in the likes of Hidenori Izaki—winner of the 2014 World Barista Championship—and Shuichi Sasaki, who took the World Aeropress Championship the same year. What makes this burgeoning scene fascinating is the mix of the traditional and the contemporary. Here, old-world kissaten (tea rooms) and upstart third wave coexist, and variety abounds. 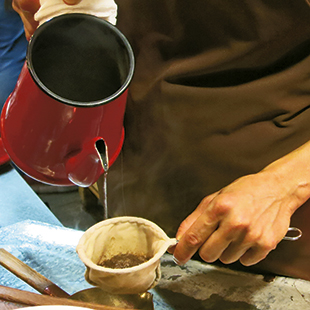 The world of fashion has taken to coffee like steamed milk to espresso, and the expanding number of coffee-fashion hybrids and dedicated roasters is turning the Harajuku-Omotesando area into a hotbed of new coffee experiences. Café Kitsuné, Little Cloud Coffee, and Coby Coffee are good examples, where a cup is permission to loiter, lounge, and linger over could-be purchases. The coffee in these areas is as cool as it is caffeinated, but it’s also international. Together with The Roastery, the aptly-named local roaster, there’s Fuglen and Coutume from Norway and France, respectively.

But to understand coffee in Japan, one needs to look to the kissaten, where coffee means aged beans, dark roasts, and a moment of respite from the outside world. The kissaten offers a snapshot of the past, where tradition is valued and the old ways observed. L’Ambre in Ginza, for example, is more than simply a coffee house—it’s a time capsule that, since inception, remains largely unchanged in both style and approach, offering a glimpse at the nostalgic tastes and times of an older Japan. The kissaten also show a depth of consideration rarely seen anywhere else. Chatei Hatou, for example, pick out individual cups for each visitor, and pre-warm both cup and saucer to ensure a pleasant experience.

As the owners of the kissaten hang up their aprons and relax into retirement, a younger generation is picking up the torch and settling into the neighborhood shōtengai (shopping street) culture they fondly remember from their youth. These new cafés reflect the changing views of their younger owners. Sarutahiko Atelier, Paddlers Coffee, and Woodberry Coffee Roasters, to name a few, are encouraging communication and friendship through their open design and communal nature. But don’t think the coffee suffers for it—even NOMA’s own René Redzepi rated Switch Coffee, in the sleepy suburbs of Meguro, as one of his favorite coffee spots. 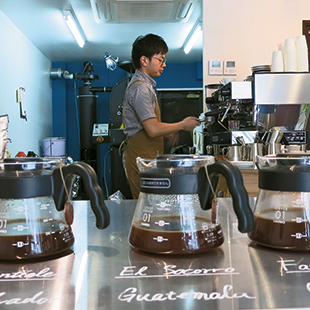 The search for the perfect cup of joe also brings with it eccentricities unique to Tokyo. These are personalities that made coffee as much an expression of who they are as what they brew. Bear Pond Espresso in Shimokitazawa is famous both at home and abroad for a tireless, obsessive dedication to the perfect espresso. Owner Katsuyuki is talked of in equal parts reverence for his abilities, and disdain for his sometimes gruff nature. In the quieter suburbs of Mitaka, you’ll find the tranquil, ritualistic Irukaya, a reservation-only coffee bar with a long list of rules and an even longer brew time. At these places, coffee acts as a conduit for that perfect moment of tranquility and enjoyment—whether that be short and sharp at Bear Pond, or long and drawn out at Irukaya. That two such places exist, centered around the same ingredient yet offering completely different experiences, is perhaps a testament to the versatility of the humble coffee bean.

Together with all of this, a variety of coffee-roasting culture is taking root in residential Kiyosumi-shirakawa. Once home only to the Japanese Cream of the Crop, recently the area has seen New Zealand’s Allpress Espresso and San Francisco’s Blue Bottle turn former warehouse spaces into café-roasteries and home bases for Japanese expansion. But among all the roaster wars and international expansion, it’s comforting to know that local community hubs like ARISE can still happily survive just around the corner from the famed Blue Bottle.

In the end, coffee is a variety of things to a variety of people. From a simple morning pick-me-up to an art form, a ritual, a chance to connect and communicate, and even a window into culture. There might not be any comparable single product in Tokyo with this kind of diversity.

Around every station and at every corner is a caffeinated experience with a story to tell, waiting to be discovered.