Gin’s popularity in Japan hasn’t quite caught up with the rest of the world and whiskey still remains king, but Bar Copain owner Jenya is trying to change that — one gin and sonic (a mix of soda and tonic) at a time.

As soon as you walk into Bar Copain, you are instantly greeted by the refreshing aroma of citrus, lemongrass and bartender Jenya’s friendly, welcoming face. The warm wooden interior and dotted fairy lights make you feel at home, with the exposed brick wall giving the bar a distinctly European feel that almost makes you forget you’re in Ikebukuro.

The custom-built glass and metal cabinets that line the walls and bartop display Jenya’s impressive craft gin collection from around the world. Before the bar even opened, Jenya had a personal collection of over 100 gins from her travels, and it now stands at over 200. A large majority are from the UK, as the popularity of the spirit has skyrocketed there in the last two years, with almost every city or town now having their own distillery. The collection also features many craft gins from mainland Europe, Russia, India, and Japan that vary in the number of botanicals, flavor, and strength. 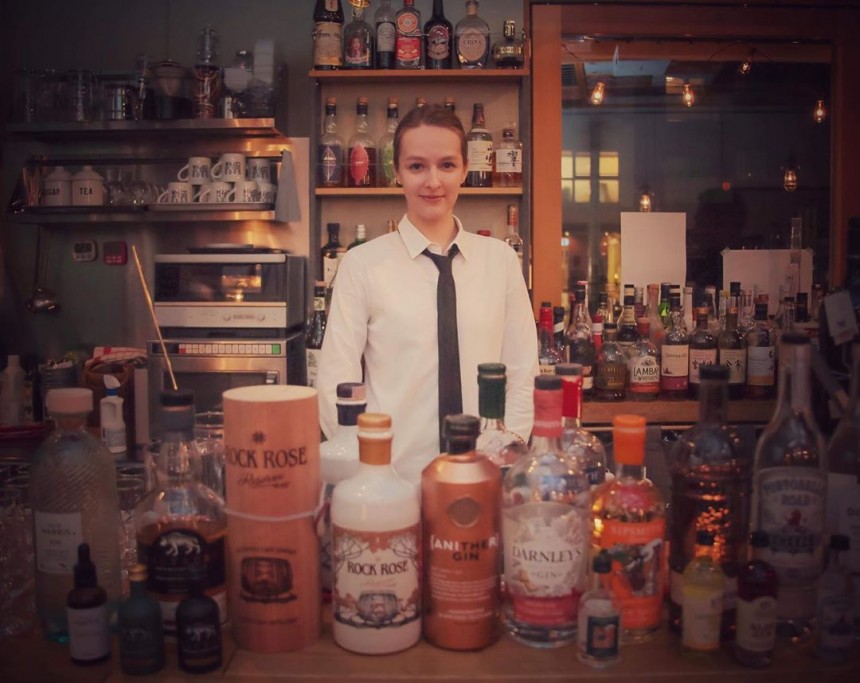 Having attended London Bar School, Jenya is well versed in the artforms of free pouring and mixology, and graduated with an International Bartending Diploma. The proof of this is in the Bar Copain drinks menu, which features many classic cocktails such as Moscow Mules, Mojitos and Espresso Martinis executed to perfection, as well as fresh fruit gin and tonics, along with a range of whiskeys and soft drinks. Jenya prefers to serve gin with sonic; a hybrid mix of soda and tonic. This enables the various flavors and botanicals of the gin to come through as opposed to being overpowered by a strong tonic. It makes for a refreshing change, having previously only had gin paired with tonic; you really can taste the difference.

It’s clear Jenya has a passion for gin, but also that she wants Bar Copain to be a place where people from all different backgrounds can mix, socialize and feel comfortable — hence the name Copain — which translates to “friend” in French. It’s a place that she hopes will bring the ever-changing community of not just Ikebukuro, but also Tokyo, together. Jenya’s aim for Bar Copain is to educate the Japanese market on this age-old drink, while also attracting an international crowd hoping to make them feel at home. It’s clearly fulfilling its role, as the bar has recently celebrated its second anniversary. The easygoing bar is more than just your average watering hole, as once or twice a month the bar hosts talks, film nights, or open mic nights. International and local artists can also exhibit their artwork on the walls.

So, if you fancy a change of pace from the usual busy, overcrowded Shinjuku or Shibuya bars and want to expand your gin knowledge or meet new people, Bar Copain is well worth a visit.