Osaka-based independent label Custardcore has been showcasing the global music scene to Japanese music maniacs for the last two years. Following American post punk band The Lithics’ Japan tour earlier this year, the label have just announced another for American band The Woolen Men. Ahead of the tour starting on October 26 in Kyoto, Metropolis spoke to the label about their philosophy, ambitions and this upcoming tour.

Metropolis: How did Custardcore start?

Custardcore: We started together in 2017. Both of us have been in our own bands, toured in America and released CDs from American labels. While out there, we both met a lot of people and made many friends. All of them looked after us very well and told us how much they wanted to come to gig and tour in Japan. Basically, we wanted to do what they did for us. The owner has his own job and I’m still working with my own band Foodie, but it’s mainly me doing most of the label’s work.

M: How have things been since the label started?

C: It’s only two years old so our label is still small and there’s still a lot to do. We were invited to Øya Festival in Norway this summer — I’m still not sure why they invited us, but it shows that some people do know Custardcore, which brought me great joy and gave me more motivation to carry on the label. While I was there, I met even more people telling me they wanted to gig in Japan.

M: Have there been any difficulties running your own label?

C: Yes, there has been. Money is probably the main concern and struggle for us. Both of us have our own bands so we knew how the Japanese live house venues work. However,  it’s not always a nice system. It costs us a lot. Luckily, we know a lot of local bands and artists across the country, so they help us out a lot. 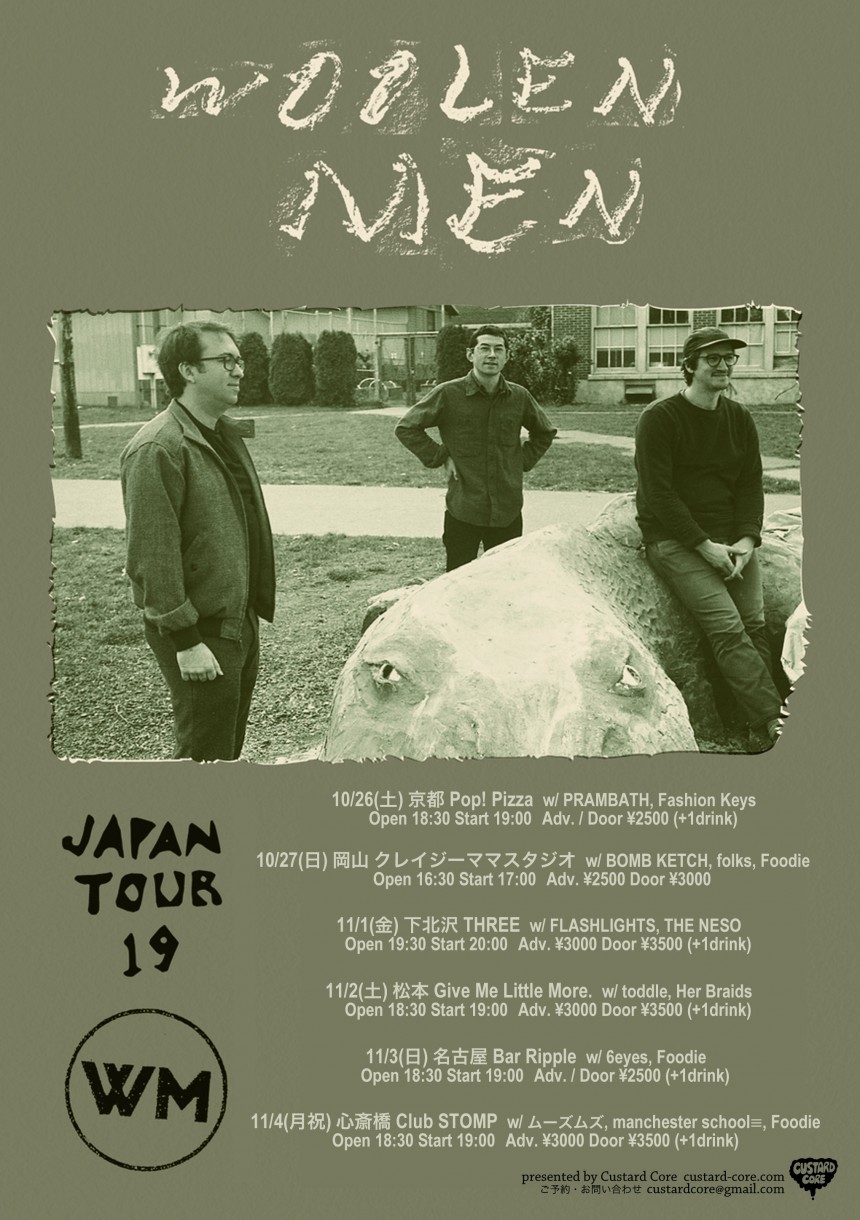 M: How did you meet The Woolen Men?

C: When we did The Lithics Japan tour earlier this year, the members made a list of bands that they recommend for us. I gave each band on the list a listen and I liked them all. Honestly, I would love to bring them all here, but I chose to contact The Woolen Men and got a positive response. So that’s how it happened.

M: The Lithics and The Woolen Men are both from Oregon. How do you choose bands for tour?

C: We don’t have any specific way or policy of how we choose bands. To be honest, actually many bands messaged us that they want to come to Japan but we don’t have much time for them as Custardcore is basically just two of us.

M: How would you describe The Woolen Men’s sound?

C: I think they are a proper indie band. Whether if you are a punk fan or guitar pop mania you would enjoy their shows. Small tiny stages would be more appropriate for the band rather than a big gorgeous stage sets for a music festival (laughs). The album jacket is also weird. I hope people enjoy how indie they are. Also we are so proud of the support bands for this tour, too. We only chose what we really think very cool as support acts carefully.

M: Have you thought about hosting your own festivals in the future?

C: Probably not if I am being honest. Of course we would like to do as many tours as possible but we love live house a lot. I think it is because we also play music at small live houses so we are obsessed with it so much. We love how it’s very closed atmosphere but has sort of unity at the same time in a sense we all know people are there to be for the same reason — to see that band. That excitement when you open the heavy door as you walk in the venue is pretty good. But it doesn’t mean it’s excluded. Everyone’s welcome.

M: What is the ultimate goal for Custardcore?

C: Our aim is to introduce great Japanese bands to the world and great foreign bands to Japan.

When I was in Norway, I asked them why they want to come to Japan. The answers were like they like Japanese food or Ghibli movies. They barely know any Japanese bands. If anything, Boredoms, Shonen Knife or YMO which are 30 years ago. I was sort of upset about how the Japanese music hasn’t been updated at all since then. We are an independent label so it might not be possible to bring 100 artists a year. Custardcore’s shows are the place where people get to see lots of bands that we believe are cool, whether it’s Japanese bands or not.

The world does need to know there is so much more than food and Ghibli in Japan. Cool amazing music and bands that the word doesn’t know yet do exist here. For Japanese music fans, I want them to know live house is such a fun place to be. It would be such an honour if people trust our lineup and come to our shows even if they don’t know the bands.