In Defense of “Omotenashi”

Why hating politeness has got the problem wrong

Sayaka Ishida wrote an interesting story about her distaste for “omotenashi” for Metropolis the other day, and the piece received lots of, shall we say, heated responses. Some were in agreement with Sayaka’s complaints, claiming that the false, rigid show of politeness is disturbing, while others claimed that a world without omotenashi would be a worse place.

In the spirit of sharing different ideas and opinions, I’d like to argue that Ishida’s issues with Japanese customer service, while understandable, don’t really do justice to omotenashi. Omotenashi, in my view, is just a misunderstood concept that brings happiness to people.

Clearing the charges against omotenashi

First, let’s get one problem out of the way: the inability of shop clerks to be flexible with your demands is not the result of omotenashi. In fact, if omotenashi is of utmost priority to the shop clerks, then the politeness would kick in and prompt them to follow even the strangest of requests. There are reasons other than politeness that prevent workers from saying yes to your demands.

Sometimes, it’s for logistical reasons. Allowing people to order food not on the menu screws up the algorithm for what ingredients need to be restocked. A plastic bag at a konbini is more than a bag for your convenience; it’s also a way to distinguish purchased goods from shoplifted goods (the same reason shop clerks put stickers on goods if you tell them that you don’t need a bag). The repeated “do you need help with anything?”s and clerks carrying your bag for you to the door are also measures to reduce shoplifting.

Other times, it’s because of the corporate structure. Many people who greet you with “irasshaimase” at a restaurant or a shop are part-timers, with no authority to change how the business is run. Imagine asking factory workers at a car production line to make your car have three wheels instead of four. They may technically be able to do so, but they’d probably refer you to the manager.

More alarmingly, it’s to prevent people from filing complaints. The reason warm bentos and cold drinks are put in different bags at konbini is because the drinks might cool down the bento, and vice versa. You’d think people who give requests to put the two in the same bag may not be angry with the bento going cold quickly, but you’d be surprised (as someone who’s worked in the service industry before, I can attest to this).

The unfortunate reality of consumer culture in Japan is that many consumers have gotten used to polite service so much that the mantra “customers are god (お客様は神様)” is now being used by some customers. As a former worker who was told by several angry customers “お客様は神様だろ?” (“customers are god, right?”), I have seen firsthand how some customers file complaints that seem unwarranted but do so anyway with the confidence of an almighty “god.” 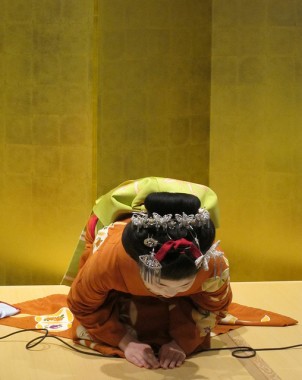 This is where the “falseness” of polite customer service comes in. Yes, store clerks may not always be genuinely wishing for your happiness. Yes, the politeness may be forced and systemized. But they are often doing so as a means of self defense, as a way to minimize the potential harm of an angry customer claiming that clerks didn’t bow down low enough for an “arigatou-gozaimashita.” And the sad reality is that there are people who get angry when clerks don’t bow low for a thank you.

Of course, this is not to say that the discomfort shoppers feel from over-politeness should be ignored. The point here is that it’s not necessarily omotenashi making workers do things that discomfort you.

Rediscovering the beauty of omotenashi

It’s very easy to conflate omotenashi with the politeness forced as a result of the “customer is god” consumer culture. However, I think that true omotenashi lies elsewhere.

Omotenashi, or a purer version of it, is alive and well in the local shokudos (casual restaurants), mom-and-pop grocery stores and small ryokans (inns) hidden deep in the countryside. The same “irasshaimase” can be heard, but it’s a less forced, more genuine type of irasshaimase.

They’re the sort of places where customers can strike up conversations with the clerks and exchange gossip about the neighborhood. They’re the sort of places where the keigo (honorific language) is more conversational, where the elderly couple running the shop treats you more like a treasured grandchild than a “god.” These shops can provide you genuine politeness, and may even accept the requests you couldn’t get konbini cashiers to say yes to.

The key here, in my view, is how the clerks view customer service. In the more genuine omotenashi settings, clerks probably see good service as connecting with people and giving them a genuinely happy experience. In the settings with more false types of politeness, service is treating the “customer” well for the sake of the company. If customers are treated as consumers who purchase goods as a result of providing services, as high school economics would want us to think, the interaction of customers and clerks as people who can genuinely care for one another inevitably fades away.

This shift is, to some extent, inevitable. With the market economy and the ensuing consumer culture dictating how shops should behave, we can’t realistically demand urban konbinis, whose existence depends on whether they can beat the competition and win profits for the franchise, to suddenly give us the experience of a mom-and-pop store in a rural community.

However, it’s just as unrealistic to assume that over-polite workers are merely cold, heartless profit seekers. There’s a bit of humanity, a bit of wishing that other people will be happy, in everyone. That can be the source of encouraging a healthier, less disturbing type of politeness. And in order to do that, we have to free them from the burdens of a customer-worshipping consumer culture.