Shooting music videos on Tokyo’s streets and gigging in Japan

Metropolis sat down with UK math rock band Delta Sleep, who are about to embark on a world tour, to chat about gigging in Japan, recording with Japanese band Tricot, releasing surprise EP Younger Years and getting shooed away by the Tokyo police.

Metropolis: I’m glad you decided to play some more shows in Japan. Was there anything in particular about Japan that brought you back here?

Dave Jackson: Everything! I haven’t stopped thinking about Japan since we toured in 2016. But honestly, since I was a kid I’d dreamed of touring Japan and one tour was definitely not enough to satisfy my urge. We’ve got some good friends in Tokyo that we haven’t seen in years, so it’s going to be nice to head back and hang out.

M: The last time you were here, you shot a couple of music videos on the streets of Tokyo. How was that experience? Did you get any notable interactions with passersby?

DJ: We didn’t realize it was a bit of a no-no to busk in Japan, so we set up in the middle of the street near Shindaita and just went for a take. After a couple of runs through “Strongthany” we got some surprised but endearing looks from people. It was just after the last take (the one we finally used) that the police turned up, took our details and told us to immediately move on…

M: Your last release before Younger Years was the wonderful Ghost City Rarities EP. You have two songs that feature vocals from the Japanese math rock group Tricot and you were even declared an “unsung hero in music” during an interview with Tricot’s Ikkyu Nakajima. How was it working with them?

Delta Sleep: That’s really nice of Ikkyu to say, we’re big fans of Tricot! We’ve played a couple of shows with Tricot in Japan and the UK over the past few years and we’ve gotten to know each other quite well. So naturally when we asked them to sing on the tracks they were more than happy to get involved.

M: Is there any chance of Tricot joining you on stage in Tokyo to do the Japanese versions of the songs off the EP?

DJ: That would be pretty damn cool. Hank from TTNG jumped on stage with us last time we played Fever in Tokyo, so anything is possible.

M: Are there any Japanese bands you have been enjoying recently? What do you think of the Japanese music scene in general?

Glen Hodgson: Japan has had a huge influence on us for several years. Devin and I bonded over a mutual love for Cornelius at university and Point is still one of my favorite albums ever. We also saw Lite play in the UK for the first time when we were at university in about 2008. They totally blew our minds. The Japanese music scene is great because it’s a very fertile place for experimental music. Artists are free to make unconventional music and as a country with a strong fan culture, artists are supported and can express themselves.

DJ: Japan has given birth to some of our favorite bands: Toe, Tricot, Mouse in the Keys, Lite. So many great bands and such a distinct sound. I swear Japan has nailed that live, big room snare sound, to me it’s the iconic sound of Japanese alternative music. 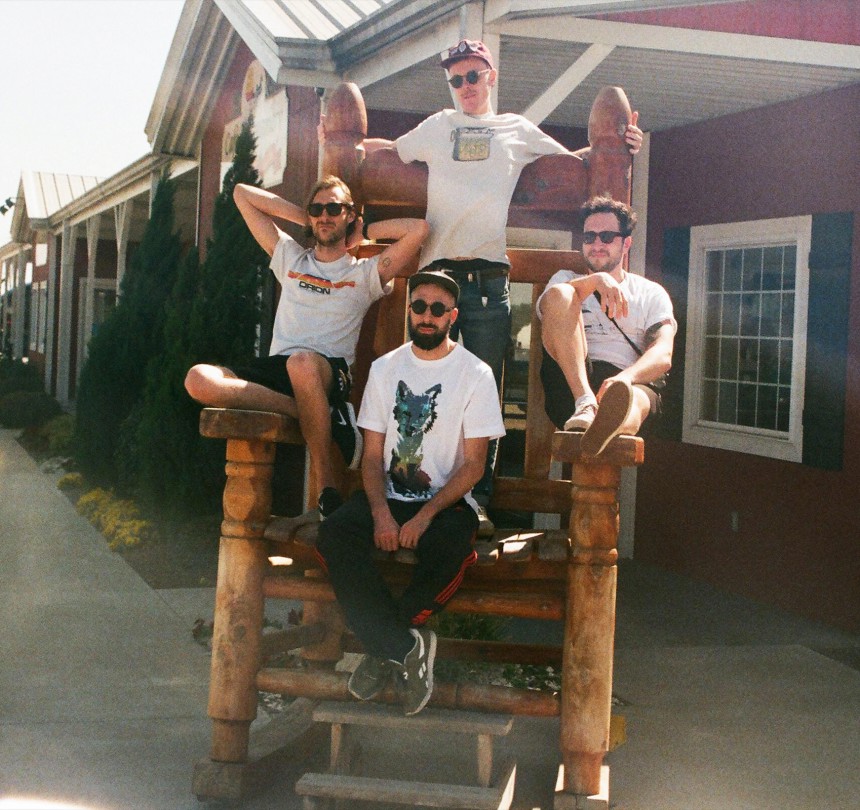 M: Regarding Japan, are there any other aspects of Japan or Japanese culture you enjoy and want to check out while you are here?

DS: We don’t have much time in Japan this time round but we do have a couple of days in Osaka, which was a city we really wanted to explore last time. Food is always number one for me, so I’ll probably spend two days eating glorious takoyaki and drinking sake.

M: You released your new EP, Younger Years, so suddenly. Did you have this in mind when you wrote and recorded it? Or did the idea come up later?

DS: Yeah, we wanted to work on a project that was outside the usual album constraints. Usually you’ll spend 6 months pushing singles and videos and the album ends up coming out a year or so after it was initially recorded. So we decided to just go into the studio with no pressure and release it with no press or PR. The whole process was so rewarding! It’s also a nice way to give back to the fans without making them wait.

M: It seems as though you recorded the album in a few different cities. What made you decide to record in Italy, Berlin, and Los Angeles?

DS: We had a day off in Dortmund on our EU tour with Mineral this May, so we took that chance to book ourselves into a studio and demo the tracks. After that we didn’t have much time to play around with the tracks until we hit Middle Farm Studios, so the rest were finished and recorded there. “Three Ghosts” came a little after that recording session at Middle Farm. The track was spawned from the ending of “Constant Dreamer” and kind of came together cover the next few weeks. So Dev recorded this on his own in various hotel rooms around the world. “The Younger Years” is actually a song we recorded at the same time as Ghost City. It’s a bit of a golden oldie that one.

M: When you wrote Younger Years did you come in with an idea from the start or did it come together as you went along? Do you think the album you envisioned is the album you made?

DS: Honestly, we didn’t have a plan like we have had in the past for Ghost City or Twin Galaxies. We left all that behind and took the notion of ‘go with the flow.’ Whatever happens, happens. The only idea we had was that it was to be a spontaneous session, the sound of four friends writing and recording songs live and on the go, and that comes across really well I feel.

Delta Sleep released Younger Years on September 27, 2019 and will play in Osaka at Live Space Conpass on November 18 and in Tokyo at Live House Fever on November 19.