“I wanted a name like someone’s name. Donnah comes from the Italian word donna, so it means ‘woman.’ Ma belle means ‘my beautiful person’ in French. Donnah Mabel is my ideal woman.” 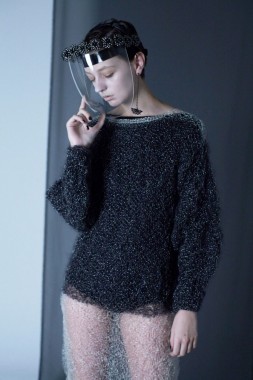 Donnah Mabel and the designer at its helm, Miyuki Kitahara, might just be the most mysterious young Japanese label around right now. Originally established in 2016 as a collaboration between Japanese textile company Takisada Osaka and Fake Showroom, the label has maintained a perplexingly low profile since infancy. Perplexing because where most young designers are hustling just to kick themselves off the ground, painstakingly and meticulously building their brands using the most powerful tools at their disposal – Instagram, Facebook, Twitter – Donnah Mabel is taking a backseat, building a mythology by building walls and allowing the clothes to do the talking.

“Profile is not so important for me,” says Kitahara. “People should see what I express in my collection, not my background.” It’s a statement that feels totally at odds with where we are culturally in 2018. A flagrant denial of the status quo, a rejection of the evolution that has lead the industry to where it is now – a world of live streams, hashtags, instant access and instant gratification. Put simply, it’s very idealistic. And yet there’s something very tantalizing about this mode of thought. We’ve all daydreamed about removing ourselves from social media, deleting all the pictures and accounts, becoming invisible. We’ve all worried about authenticity in a time where even our parents are cultivating their online personal brand. Donnah Mabel represents a golden age ideal. Wouldn’t it be nice if our work was judged purely on its quality rather than its marketing?

In Kitahara’s case, the label has maintained an impressive amount of buzz over the last few years, without the flashy campaigns, runway shows, major interviews, and (not that it matters), still with just over 800 followers on Instagram. Pure and simple, what makes Donnah Mabel so exciting is Kitahara’s unique vision. You can see it just from glancing through each season’s lookbook. Kitahara mixes feminine silhouettes with helmets, life preservers and metallic accessories, resembling armor, for a look that’s strong without losing its womanliness. The fabrics are soft and understated in some places, bold and geometric in others. It’s ready-to-wear with a couture sensibility, a breath of fresh air in a sea of same-same fashions. “[I] never consider trends,” says the designer, and in this case we can believe it. 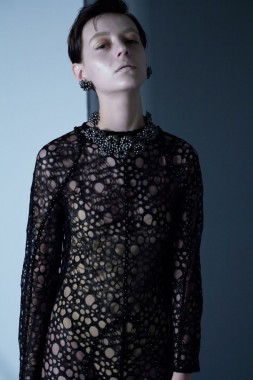 Her time studying fashion and working with creative powerhouse Hussein Chalayan in London clearly had a huge influence on Kitahara’s creative output, not only aesthetically but also from a conceptual perspective. “I learned the importance of toile, paying attention to detail and believing one’s self,” she says. Kitahara draws from a broad spectrum of ideas and experiences when designing concepts for each collection, from travelling around Europe on Eurostar (AW17), and having airplane troubles in Croatia (SS17) to imagining the life of a deep-sea creature (AW18). Just don’t go making any implications yourself. “I do not think I am drawn to utilitarian [or] military imagery,’” she dismisses, after the topic is suggested.

As we gather together fragments of Donnah Mabel, we know that Kitahara has plans to distribute in Europe and Northern America. “I think the mood of the label fits [those] countries more than Japan.” She also has high hopes for the future of ethical fashion. “New materials will become common for making clothes. They might appear from trash or something wasted.”

Still, the identity of the ‘ideal woman’ that lies at the heart of the label remains vague. Who is the ideal woman? Perhaps it’s someone who, like Kitahara, doesn’t offer herself up to the world on a platter. A thinker and dreamer, someone who marches to the beat of her own drum, someone who doesn’t want a smartphone lens standing between her and life. If we want to understand her we’ll just have to keep watching.

You can order Donnah Mabel AW2018 Collection at @seenowtokyo till 11th of May.

For more information about clothes which is including archives,