21_21 Design Sight has its mind on the future

“The Fab Mind” is a bit of a misleading title for this show, which aroused expectations of seeing something about the original “Fab Four,” the Beatles—or at least something referring to the 1960s mindset that created them and the culture of that revolutionary decade. But this show at Roppongi’s 21_21 Design Site is a lot more forward-looking than that.

The exhibit is concerned with the ongoing fallout of the information technology revolution we’re currently living through, and the ways in which it can and will impact our lives. If you’re a tech geek, just worried or concerned about the future, this is the show for you. 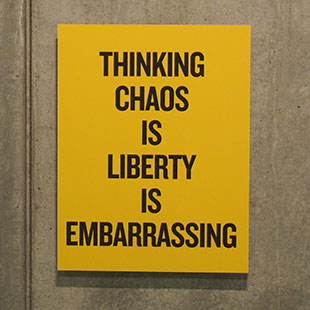 No chaos in liberty
(Photo by C.B. Liddell)

Directing the show are Noriko Kawakami, a design journalist, and Ikko Yokoyama, a Japanese curator working in Sweden. As one would expect from such a pairing, the show notes are larded with a lot of positivist jargon about “forging new relationships with our society now and into the future.” However, buying this agenda isn’t necessary to enjoying the show, as most of the artworks stand on their own feet.

This is certainly true of Slogans for the Early Twenty-First Century (2011) by Douglas Coupland, the novelist and artist who popularized the terms “Generation X” and “McJob.” A range of striking and witty slogans greet the visitor upon entry to the bowels of the bunker-like 21_21 Design Site—including “Being middle class was fun,” referring to the middle-class squeeze created by technology’s ability to mechanize or outsource white-collar jobs; and “In the future, we’ll all be shopping from jail,” a reference to the consumer surveillance society that’s emerging.

Facing this, Swedish art group Humans since 1982 present their impressive “A Million Times” (2014), an installation made from 750 separate dial clocks that are synchronized so they behave collectively like a massive, digital clock or LED readout. 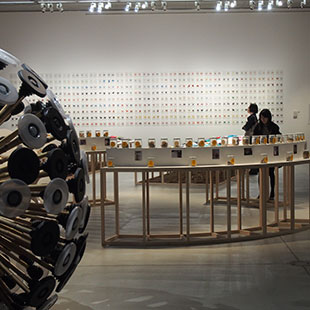 A view of the exhibition
(Photo by C.B. Liddell)

Altogether, there are works by 24 groups of artists and designers from over ten countries. Some of them, like the various solutions to practical problems created by the Fixperts group, are actually good ideas but are rather dull as artworks.

Also boring are those works that seem designed to win grant money by being a little too worthy and earnest. A good example is the rather rudimentary beaded vases created by a Swedish group in collaboration with five South African women, hyped as a way of preserving local and traditional crafts.

Set against this apparently world-spanning piece of detritus, the most impressive artwork at the exhibition is found much closer to home in Yosuke Ushigome’s Professional Sharing (2014). This is a video installation with related items that detail Ushigome’s self-utilization of himself and his mobile smart devices to eke out micro-credits in a range of odd ways.

These range from taking random photos of crowds to sell to data companies and using his computer processors to generate Bitcoins, to serving as a mobile battery charger and wearing his tablet as a sandwich board to carry advertising messages acutely targeted by GPS.

This exhibit suggests you won’t need to be mad to live in the future—but it’ll certainly help.