Mitzi Uehara Carter muses on being black and Okinawan

Though Mitzi Uehara Carter was born on the opposite side of the Pacific, she’s kept herself anything but distant from her hereditary home. This Texas-native daughter of an African-American father and an Okinawan mother is currently a PhD candidate in the anthropology department at UC Berkeley, where she has recently completed her doctoral dissertation. She’s spent years doing research, including a year of field work collecting the personal stories of Okinawan families. In 2010, she started the blog Grits and Sushi to chronicle her musings on Okinawa, race, militarization, and blackness. 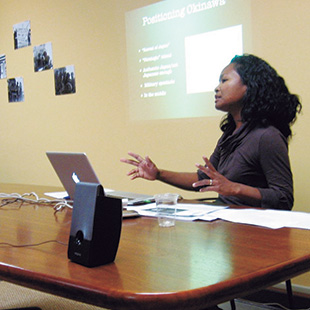 “I started the blog so I could have a place to think about my anthropological work and my personal life and experiences. It was a good way for me to merge those two worlds,” Uehara Carter explains. “Anthropology studies at Berkeley can be very intense and theoretical, so I wanted my blog to be a place where I could reflect on some of the field work I was doing in Okinawa, and have a landing page where I could also engage with other people dealing with similar questions about their lives, their identities, and about race.”

Grits and Sushi has since grown into a resource, an open journal, and a communal space, attracting readers from around the globe interested in things black and Okinawan, including interracial marriages, mixed-race citizens, and issues surrounding American military bases in Okinawa.

“I created these forums where I brought together black military personnel, Okinawan activists, and residents of Okinawa to have a conversation, a kind of ‘talk-story’,” she says, explaining the Okinawan term, “yuntaku.”

“There were participants with varying ideas of what Okinawa is—all of these amazing stories together in one space. People were just fleshing this stuff out, and it was emotional and insightful.”

Uehara Carter also serves as an executive board member of Hapa Japan, an organization based at the University of Southern California. Hapa Japan Conference is held biennially, and hapa from around the globe meet there to discuss and explore what it means to be part-Japanese and part-another race or ethnicity.

“‘Hapa’ is an alternative term to ‘hāfu’ that can bring together mixed-race Japanese from across the globe,” she says of the terminology used in the U.S. to describe people of mixed Japanese heritage. “However, I think it’s important to address blackness and difference within the various mixed-race Japanese communities as well.”

She also contributed to a documentary called Nuchi Du Takara: Tales of the “Battle of Okinawa” Survivors in California, a very moving and informative story of Okinawan women who survived the battle of Okinawa.

Grits and Sushi has been on hiatus for a period while Uehara Carter completed her dissertation. She plans to return soon with a bang by premiering a web series consisting of interviews with her mother, telling the remarkable stories of living through WWII, the U.S. Occupation, and pre-reversion Okinawa, before relocating with her black husband to the American South. Her mother withstood numerous historical and cultural gamuts and came out the other side as a fusion of them all.

“You know, I was going to call my blog Grits [a dish popular among black people in the American South] and Goya [a bitter-tasting melon found in Okinawa], but I felt goya was a little obscure, and sushi an easily identifiable cultural reference,” the soon-to-be Dr. Uehara Carter says. “And who made the grits in my family? My mother did!”

Visit www.gritsandsushi.com for more information on Mitzi Uehara Carter, the documentary, and her upcoming web series.

Baye McNeil is a lecturer, columnist, freelance writer and the author of two books on life in Japan for people of African descent. His website can be found at www.bayemcneil.com and he's known on Twitter as @locohama.