“I will leave my son to you….” said an old father, handing over the body of his dead child. Full of sadness and regret–that’s the first scene of the manga Funeral Director, where the main character Chusheng Lin’s story begins. As a funeral director, she will go on to experience untold words, hidden emotions, and unpredictable deaths, turning her anxiety about her future into an appreciation of life.

As a place where manga culture is widely appreciated, Taiwan is currently fostering a dedicated scene of talented manga artists producing quality manga covering a broad range of subject matter unique to Taiwan. Funeral Director, for example, is rooted in traditional Chinese funeral culture and turns the curtain call of our lives into its central theme. You can’t find manga like it anywhere else and, if you’re a manga fan, keeping an eye on the world of Taiwanese manga may just open you up to worlds and stories you can’t get from Japanese storytellers.

This summer, Taiwan Creative Content Agency (TAICCA) in cooperation with Happy Lemon and Eslite Spectrum Nihonbashi, has opened Taiwan Manga Kissa for a limited time from July 28 to August 28. They’ve brought 35 carefully-selected Taiwanese manga, ten motion comics dubbed by Japanese voice actors and a special selection of Taiwanese tea and cakes to enjoy while diving into the Taiwanese manga world. 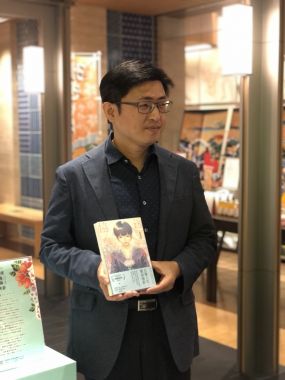 “Our goal is to let more Japanese people know that we actually have great manga artists and awesome manga works in Taiwan, that is the most important thing.” Said Lu Junwei, vice president of TAICCA. “We want people to know the beauty of Taiwan manga while enjoying delicious food and drinks.”

“Our goal is to let more Japanese people know that we actually have great manga artists and awesome manga works in Taiwan, that is the most important thing.” Said Lu Junwei, vice president of TAICCA. “We want people to know the beauty of Taiwan manga while enjoying delicious food and drinks.”

“Japan has a very mature manga market, so they may focus on a few types of themes that have more possibilities to succeed commercially. That’s the opportunity for our cooperation,” Lu said. “They want more themes in their manga and we are rich in themes and culture.”

Creating motion comics dubbed by Japanese voice actors is another example of what this cooperation will look like. “We want to redefine reading,” Lu said. “Reading manga should be a multi-experience: not just watching, but also listening and even immersive experiences.”

The Taiwan Manga Kissa is all about the immersive experience and is one of the only places in Japan to enjoy Taiwanese manga, food and culture. Organizers have been working hard to get the experience just right, apparently going as far as changing many of the decorations the night before opening. 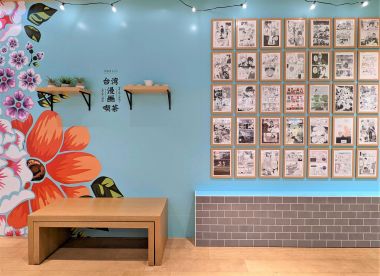 A blue wall featuring painted peonies and displaying selected manga and Taiwanese teaware was finished at midnight before opening day and is a picturesque feature for anyone wanting to share their visit on social media. “We want to create a summer vibe by using blue as the background color,” says Lin Taiyi, director of Happy Lemon’s overseas strategy department. “Peonies are a representative flower of Taiwan so we added them for people who like Taiwan to truly be able to feel Taiwan during their visit.” 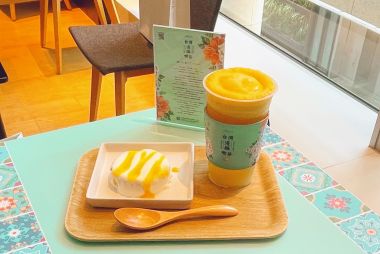 Happy Lemon also launched new limited products for this event – salty cheesecake with mango sauce and a Taiwanese jasmine tea mango smoothie with nata de coco. Salty cheese is a signature product of Happy Lemon and this will be the first time the signature dish has been combined with mango, a beloved fruit in Taiwan, since it came out in 2009.

Follow-up events and activities include SNS campaigns and a special talk that will compare and contrast Japanese and Taiwanese manga to be held on August 13. In the special talk, Taiwanese manga artist Gao Yen, author of the manga Green Song recommended by Haruki Murakami and Takashi Matsumoto, will have a special conversation with Japanese manga editor Anna Sato. More information is available via the official website.