Serving up a special slice of the city’s soul

Sasazuka, a small town minutes from Shinjuku Station on the Keio Line, doesn’t really have any particular reason, at first glance, for tourists to spend time there. Sasazuka, however, is well worth a second look.

Not much makes this station stand out from any of the others like it in the city; getting off the train here means being greeted by a rush of commuters, small chain shops and estate agents in an area where locals ignore the raised highway passing by their fourth floor apartment windows. This isn’t a typical suburban heartland; the urban infrastructure casts a shadow over the delicate details that have remained here for decades.

Sasazuka was the site of a pair of milestones alongside the old Koshu Kaido — one of the five Edo era (1603-1868) routes from the capital, Edo (now Tokyo), to various large settlements. The Koshu Kaido ended up in modern-day Shimosuwa, Nagano Prefecture. The distance markers were laid on the orders of daimyō and bureaucrat Nagayasu Okubo in 1604; it was established near some bamboo grass (sasa) growing on a 1-meter-tall mound (tsuka). Hence “Sasazuka” (or so the legend goes). 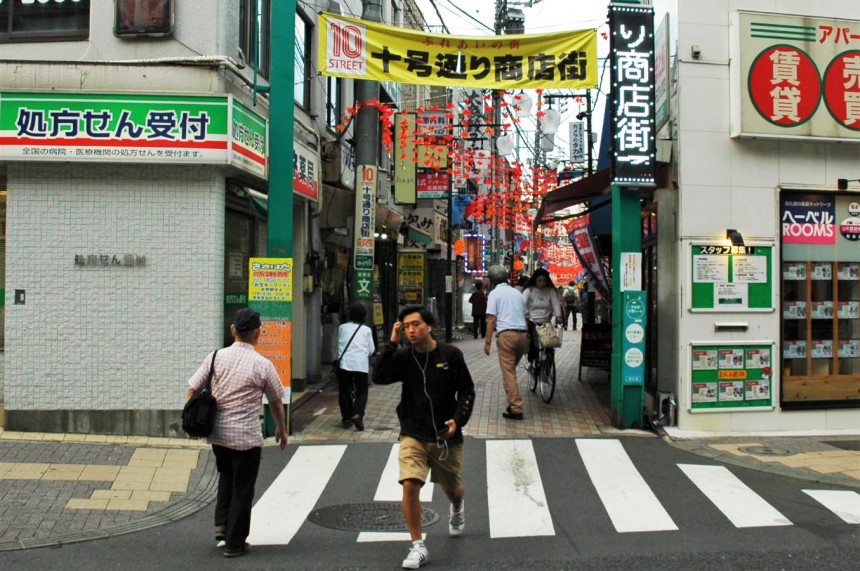 Its history of growing up along that important old highway lends a distinctive village feel to the district. Locals still stop to ask each other about their day. Showa era buildings remain unmoved.

Sasazuka’s shotengai — named 10 Street for being the site of the 10th bridge along the now defunct Tamagawajosui Canal — doesn’t run a straight course like most, meandering naturally like a long trodden path formed in another time entirely, before smartphones and convenience stores.

Slotted between two buildings, the narrow entrance to 10 Street itself is easily missable. People slip down the alley-like street as if through the narrow neck of a sand timer. Seasonally stung with reflective decorations and void of vehicles, somehow Sasazuka’s 10 Street has dodged being clogged with chain stores. It has only recently got its first conbini, almost as if protected for years by its local community of vendors and loyal, small-town customer base.

The aptly named Ebisu Fresh Fish Store (Ebisu being a favored kami or god of fishermen) is one of these old school establishments. Selling a selection of freshly caught sea creatures, its half-open shutters are fronted by a hardworking owner, who stands on the corner calling out to customers and fills the street with water when cleaning at the end of a long day. Opposite, Frankie — a small but well loved yakitori-ya — provides passersby with the tempting sight of grilled chicken on sticks slathered in sweet tare sauce. The same bend in the street is also shared by the fresh fruit vendor who has a reasonably priced array of ripe goods; further along an elderly lady sells her own choice picks of flowers to her customer base; each of the vendors working side by side in this pocket of Tokyo, probably for generations. 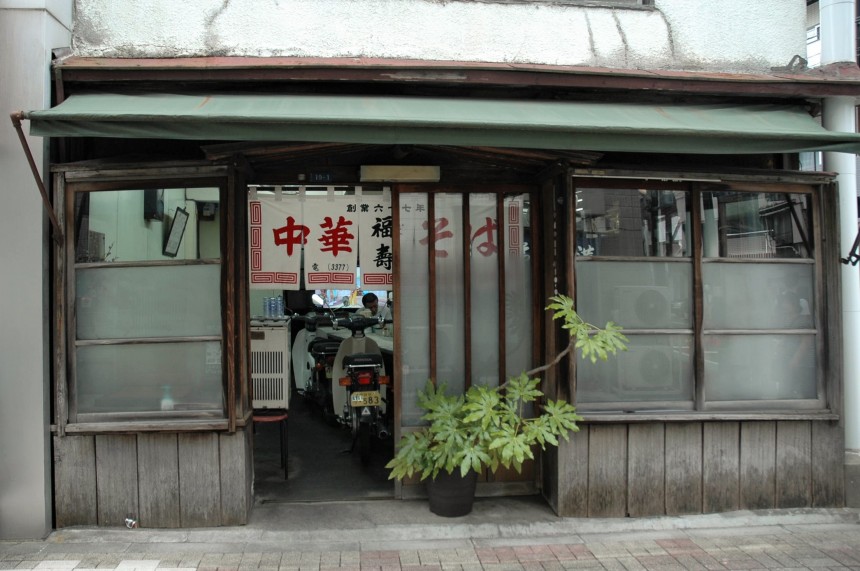 Alongside the everyday food shops, there’s the added benefit of few independent restaurants that pepper the district, many of which are new and popular ventures. There’s the modern, casual izakaya KoKoRo billowing out aromatic smoke and serving up sticks and sashimi over their solid wooden counter. The French-owned Maison Bretonne, with its warm, pub-ish atmosphere, is famous for its Brittany-style crêpes (called galettes), but offers a mean brunch as well as seasonal potage (soup). The minimalist Pieni Joki Coffee is a popular, stylish coffee hang-out spot.

Hidden upstairs above a chain sweet shop, Home Sasazuka is a cool and chilled out eatery with interiors decked out in a mix of kooky Italian-themed decorations, simple, classic furnishings and walls of wine bottles. It regularly plays out Japanese hip-hop and 90s R&B like an alternative soundtrack to whatever movie they’ve chosen to show on one of its two TVs, from gritty French cinema to Studio Ghibli hits. This is a turned-up izakaya without any pretense, but the main draw here are their thin, freshly baked homemade pizzas, each of which are just ¥500, cooked in their tiny, one-pizza-at-a-time oven. Equally low-priced is the drink selection, which draws in a lively, grown-up crowd of students and city-goers who live in this part of town for the rent but work elsewhere inside Tokyo’s sprawl.

Further along the length of 10 Street, where it begins to merge into a residential area in the north, a few old wooden houses from a bygone era still stand, easily many multiple decades old, and point to Sasazuka’s history as something of a highway town. There’s the chance to see inside one of these historic houses on the corner of 10 Street: Fukuju, established in 1951, is a ramen place that appears abandoned when closed, but during lunch times, slurping bowls of steaming noodles feed hungry stomachs, and has been for years. It’s the nostalgic taste of ramen as it was half a century ago; here, customers settle their check with coins on the counter and return their bowl to the sink themselves. A free ramen museum. It’s easy to think back and imagine travellers passing by here on foot, even with the skyscrapers and mid-rise buildings and commuters glued to their phones.

Sasazuka isn’t a place where charm will catch you at first glance; the grey concrete overhead highway, the rush of the streets and the modern surrounding developments conceal the history of the district. This is a secret section of the city which retains its charm from centuries of history, but remains a real place where people live side by side and enjoy eating, drinking and living down the same streets just as generations of Tokyoites have done before.

Its hinterland location between two differing epicentres of Tokyo subculture — Koenji and Shimokitazawa — means that it’s dusted with just the right amount of hipness from its neighbors. Combine this with its own byway history and grounded downtown feel, and it makes this place a deceptively special one. It’s easy to visit Sasazuka and, within an hour of exploring, start dreaming of it as a neighborhood in which you could live.